A Florida city has unveiled a ‘first-of-its-kind’ app backed by its police department that lets locals record any interactions with cops in the wake of three officer-involved shootings.

The smartphone application, called Tallahassee Bystander, allows people in Florida’s state capital to stream their interactions with police officers in the city.

Footage streamed is sent to a local server, where it is saved so it can be viewed by officials if necessary.

It could be started simply by saying ‘Bystander, record.’

‘We wanted to make sure this was hands-free, voice-activated so that, again, people could keep their hand where the officers could see them nd not be digging around for something in the car,’ Dailey said. ‘So it’s safer for the officer and it’s certainly safer for the citizen as well.’

It does not require registration, so users may remain anonymous. If the Tallahassee Police Department or its oversight board wants to learn more about a particular incident, it will send a push notification to whoever sent the clip, allowing them to remain anonymous if they wish.

The new Tallahassee Bystander app allows users to livestream their interactions with local police officers. The recordings are then sent to the Tallahassee Police Department and a user’s emergency contacts

Copies of the recording are saved onto the users’ smartphone, streamed live to the Tallahassee Police Department and are sent to three emergency contacts the user sets up.

The video could also be used as evidence in trials.

‘We are here for our community,’ Police Chief Lawrence Revell said at a news conference to debut the Tallahassee Bystander app on Tuesday, as it became available on the Apple App Store and the Google Play Store.

‘We want to listen and continue to collaborate on ways to strengthen our relationship with the community – and the launch of this app really highlights that.’ 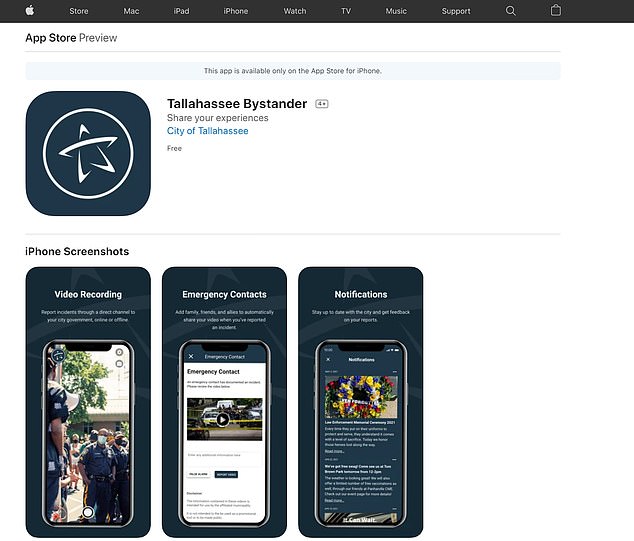 Although similar apps already exist, he said, Tallahassee is now the first city to support and release such technology to its residents on an official platform.

The City Commission allocated $50,000 for the development of the app last year, following three police-involved shooting deaths in the city.

‘It’s no secret that last summer was a very difficult time in society all across the world, across the United States, across the state of Florida and right here in Tallahassee,’ the mayor said at Tuesday’s news conference.

He appeared to be referring to the murder of George Floyd by Minneapolis cop Derek Chauvin in May 2020, which triggered global outrage.

‘It’s also no big secret that each and every day, we step up as a city. We try to increase public trust in our city government, in our police department and increase transparency.’ 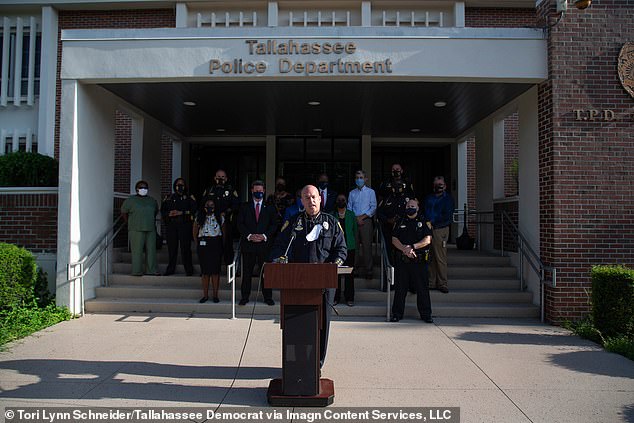 Local government and police officials met with Black Lives Matter protesters and activists in the aftermath of the shootings in the city, according to WCTV, and said they would like to have a voice-activated application that can allow users to record their interactions with the police.

The city’s Technology and Innovation Department then worked with tech firm Tesia Lisbon and Paul Woodly from the nonprofit More than a Name, and Quadrant 2, a local business, to develop the app.

Tallahassee NAACP branch President Mutagee Akbar said he believed the creation of the app was a step in the right direction for the city.

‘Anything that increases transparency and that bridges that gap between the community and law enforcement, I think is necessary and needed,’ he said. The first officer-involved shooting occurred on March 20, when police officers were trying to stop a carjacking suspect

Each of the three shootings resulted in the death of a suspect, the Tallahassee Democrat reports.

The first shooting occurred several weeks before the death of George Floyd on May 25, which prompted activists across the country to take to the streets in protest of police brutality and demand transparency.

On March 20, the Tallahassee Police Department reported, a suspect reportedly stole a vehicle. Two officers tried to follow the stolen vehicle and conduct a traffic stop when the suspect, Mychael Johnson, fled in the vehicle.

A Leon County Sheriff’s Office helicopter was called in to aid in the search, and later reported the suspect tried to carjack another vehicle, but instead returned to the original stolen vehicle.

He reportedly continued to evade officers as they tried to conduct another traffic stop, leading to a car chase that ultimately ended with a crash.

Johnson was reportedly trying to steal another vehicle when cops finally caught him.

‘The suspect violently resisted, resulting in an officer firing their handgun,’ the police department reported at the time, according to the Tallahassee Democrat.

‘The suspect was struck by the gunfire and passed away from the injuries at the scene.’

By May 19, another fatal shooting occurred – though details remain scant.

Police said they were called to investigate an altercation at a restaurant, before an officer shot and killed 69-year-old Wilbon C. Woodard at around 1.40pm.

Then, less than one week later, a suspect who had fatally stabbed a 21-year-old was killed after she allegedly pointed a gun at the officer.

Revell said at the time that officers tracked the stabbing suspect, later identified as Natasha ‘Tony’ McDade, to an apartment complex and ‘immediately saw her with the  gun and, according to what we’ve been told, pointed the gun at the officer before the officer could even fully exit the vehicle.’

Witnesses have said that multiple shots were fired that night, on May 27.

Grand juries have since determined that in each case the use of force was justified.