A Tanzanian miner and father-of-30 has become a millionaire overnight after he discovered two huge gemstones worth £2.4million.

The government handed Saniniu Laizer a cheque for 7.74 billion Tanzanian shillings (£2.4million) for the two dark violet-blue stones, each about the size of a forearm, during a trading event in the northern region of Manyara yesterday

Laizer discovered the chunks in one of the tanzanite mines in the north of the country which are surrounded by a wall to control cross-border smuggling of the valuable mineral.

‘There will be a big party tomorrow,’ Laizer, who has four wives and 30 children, told the BBC.

Saniniu Laizer is pictured during a trading event in Manyara, northern Tanzania yesterday, holding two slabs of Tanzanite that made him a multimillionaire overnight 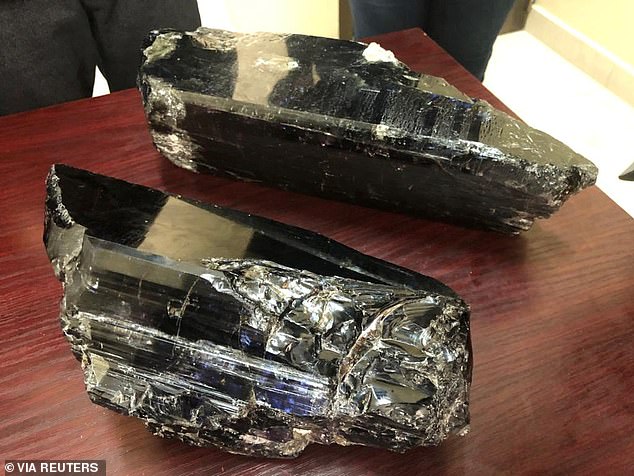 Pictured: The two slabs of Tanzanite discovered by artisanal miner Saniniu Laizer, which earned him £2.4million at a trading event yesterday

The 52-year-old said that he would slaughter a cow to celebrate his good fortune.

He added that he would use some of his earnings to build a school and a shopping mall in his community, adding that many locals can’t afford to pay for their childrens’ education.

He said that his lifestyle wouldn’t change and that he would continue to look after his herd of 2,000 cows. 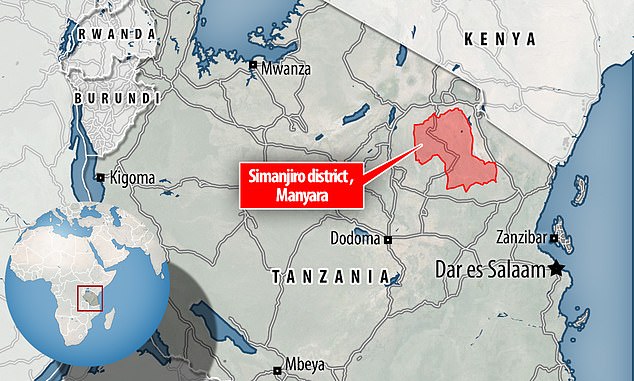 Tanzanite is an ultra-rare gemstone found only in a small northern region of the East African nation.

Laizer was pictured on Tanzanian television being presented with a large cheque after the Bank of Tanzania bought the gemstones in a ceremony yesterday. President John Magufuli phoned to congratulate Laizer live on television.

‘This is a confirmation that Tanzania is rich,’ Magufuli told minerals minister Doto Biteko.

Tanzania last year set up trading centres around the country to allow artisanal miners to sell their gems and gold to the government.

Artisanal miners are not officially employed by any mining companies and usually mine by hand.

Magufuli inaugurated the wall around tanzanite mining concessions in northern Tanzania in April 2018, in an attempt to control illegal mining and trading activities.

At the time he said 40 per cent of tanzanite produced there was being lost.

The ultra-rare gemstone Tanzanite is only found in northern Tanzania.

It is possibly the rarest mineral in the world, found in an area just 2.5 miles wide and 1.2 miles long at the foot of Mount Kilimanjaro.

The stones are priced depending on the rarity of their colour and clarity.

Tanzanite slabs are often exported to India to be polished and transformed into decorative objects.

Local geologists predict its supply could be depleted within 20 years, the BBC reported.

The gemstone was named after its country of origin by luxury jeweller Tiffany & Co.