The ousted CEO of fashion company Tapestry posed as a fitness photographer on Craigslist to lure a woman 13 years ago and then had an affair with her while he was married with a baby on the way, it has been claimed.

Jide Zeitlin stepped down this week from Tapestry, that owns Kate Spade among other fashion brands, after claims about his relationship with the woman were made public in The Wall Street Journal.

The report alleged that he’d been investigated for posing as a photographer to lure a woman online but no other detail was given.

On Tuesday, that woman was named by ProPublica as Gretchen Raymond, a chef to a billionaire in Connecticut who first came into contact with him in 2007 when she responded to a Craigslist ad he’d posted.

In 2009, when Zeitlin was being nominated for an appointment within the Obama administration, she says she wrote an email to a Connecticut senator’s assistant (the assistant says he has no memory of it) and to the FBI.

She also contacted members of the media and her story was reported in part by The Cable, but full details never emerged.

In 2007, when she met Zeitlin, she was a fitness model at the time and wanted someone to take photos of her.

Zeitlin – who has not fully admitted to everything she alleges but said on Tuesday they’d had a relationship – allegedly used the name James Greene to contact her.

According to emails revealed by ProPublica, he told her to come to their first photo-shoot without any underwear on and said he wanted to ‘deliberately’ photograph her behind.

‘One of the shots you suggested is of your ass while you are working out with leg weights. As I am trying to envision this, I was hoping that you had some existing shots of your a**. 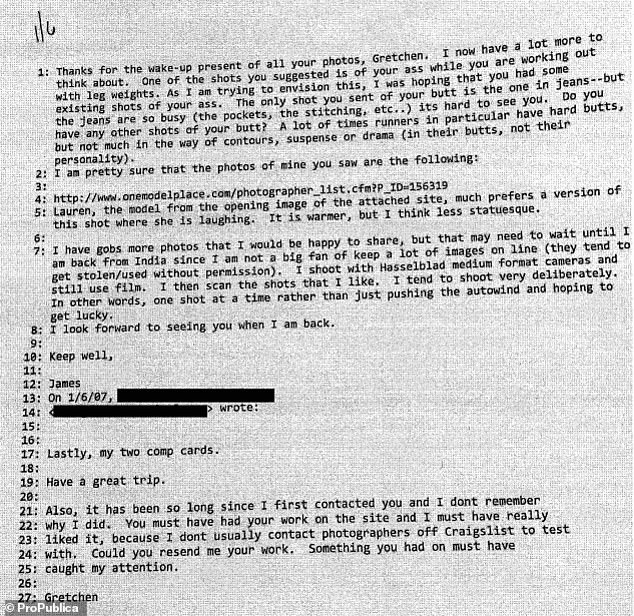 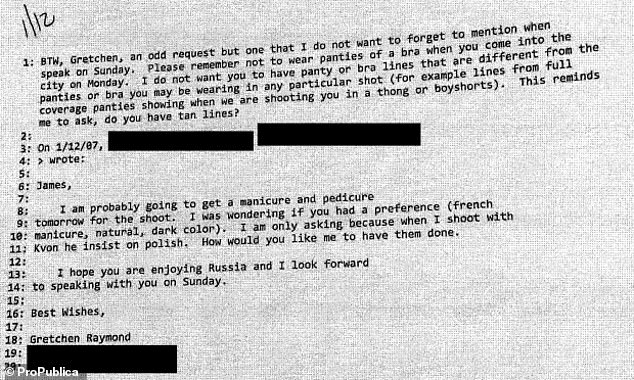 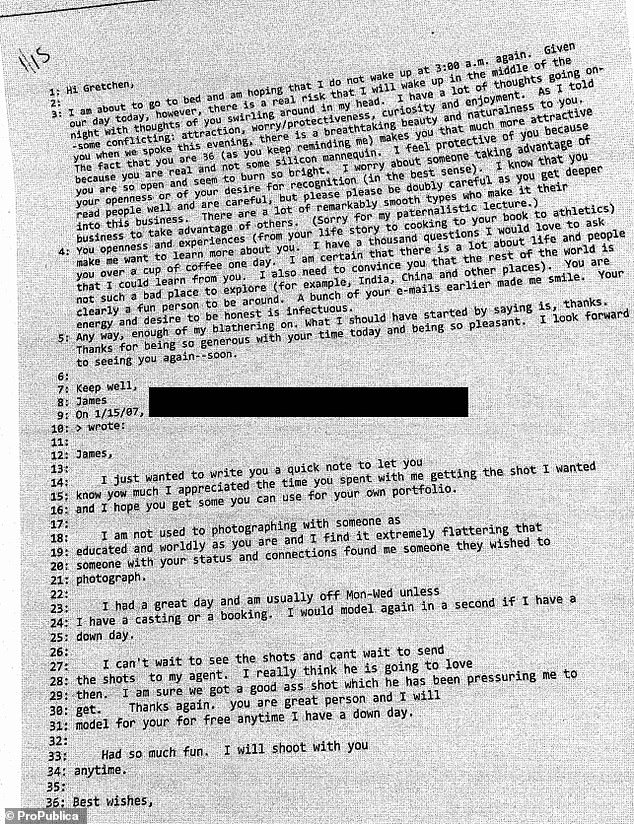 ‘The only shot you sent of your butt is the one in jeans — but the jeans are so busy (the pockets, the stitching, etc..) it’s hard to see you.

‘Do you have any other shots of your butt? A lot of times runners in particular have hard butts, but not much in the way of contours, suspense or drama (in their butts, not their personality),’ he wrote, according to the emails.

Before their first shoot – which was at the Noho Star bar in Manhattan – he told her: ‘Please remember not to wear panties or a bra when you come into the city on Monday.’

After the first shoot, they exchanged more messages and began falling for one another.

Given our day today, however, there is a real risk that I will wake up in the middle of the night with thoughts of you swirling around in my head,’ he said.

He went on to warn her against ‘other’ photographers who he said would take advantage of her ‘breathtaking beauty and naturalness’.

‘There are a lot of remarkably smooth types who make it their business to take advantage of others. (Sorry for my paternalistic lecture.) … I have a thousand questions I would love to ask you over a cup of coffee one day. … Thanks for being so generous with your time today and being so pleasant.

‘I look forward to seeing you again — soon,’ he said. 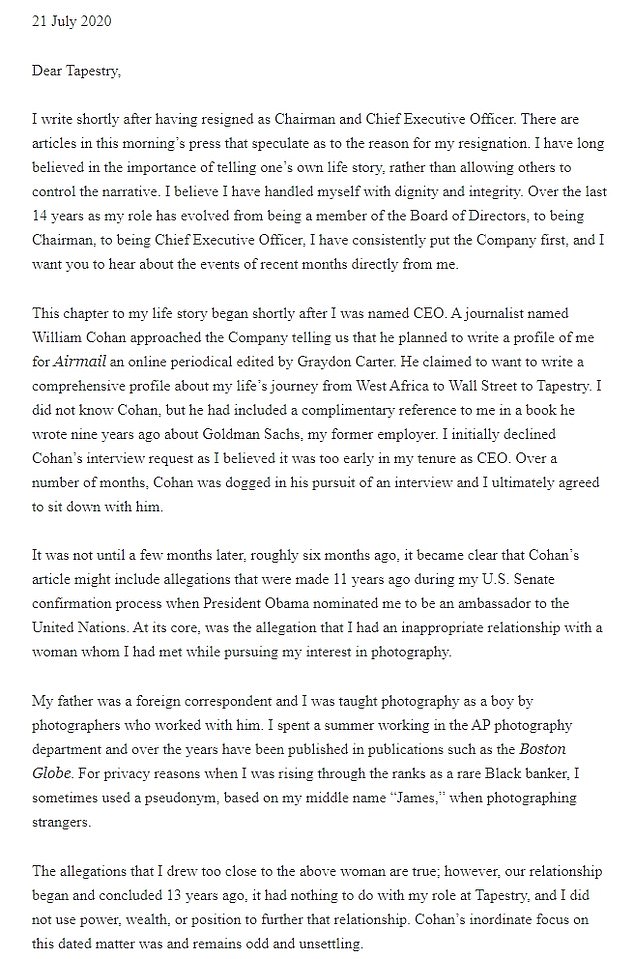 Zeitlin posted this on LinkedIn this week to seek to explain some of the controversy. He claims he is being unfairly targeted

Raymond was married at the time but did not know who Zeitlin was until a month into knowing one another.

She claimed that he then admitted to her what his real name was, and said he lied because he was an inexperienced photographer.

She decided to carry on the affair. It is unclear if she knew that he was married, or i his wife, Tina Goldberg, was pregnant at the time. 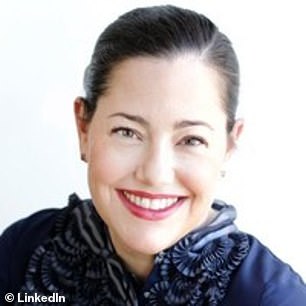 She said that he operated under the business name Soho Photo and he used an apartment that was adjacent to one he shared with his family as his ‘studio’.

Raymond told ProPublica their affair ended in around October 2007 and that he called it off, telling her he had ‘too much on his plate’.

She said she was devastated and thought they’d been planning a future together.

A month later, Raymond’s husband learned about the affair and contacted Zeitlin’s wife to tell her. ProPublica claims to have seen emails between Raymond and Zeitlin’s wife that corroborate the timeline.

Raymond and her husband then decided to investigate him. They claim they found seven women they think he photographed using the email.

None have alleged wrongdoing and all are believed to have been over the age of 18 when they met.

Raymond, determined to expose Zeitlin, contacted the FBI but nothing was done.

In 2009, when he was being considered for a job as Representative of the US to the UN for President Obama’s administration, that Raymond started airing her allegations in political circles.

She says she emailed Max Gigle, a staff assistant to Connecticut Sen. Chris Dodd, saying: ‘This man has put me and my family through hell.’

She then started emailing journalists at random with the allegations. None printed them.

Zeitlin’s nomination was then withdrawn for ‘personal reasons’ and rumors of ‘identity fraud’ but no other detail was given. An article in The Cable said he’d ‘used deception to lure her into what eventually she claims was a romantic relationship’.

He vehemently denied all the allegations to ProPublica at the end of 2019.

ProPublica’s journalist also claims to have been threatened with a libel lawsuit by a law firm operating on his behalf.

On June 23, the journalist sent a list of questions to Tapestry and Zeitlin about the entire saga which he claims triggered the internal investigation into what happened and, ultimately, led to him stepping down.

In a LinkedIn post yesterday, he said he was stepping down because he did not want to distract from the company.

He claimed that James Greene was a pseudonym based on his middle name and that he used it to protect his privacy as a ‘rare Black banker rising through the ranks’.

‘The allegations that I drew too close to the above woman are true; however our relationship began and concluded 13 years ago, it had nothing to do with my role at Tapestry, and I did not use my power, wealth or position to further that relationship.’

He also criticized the ProPublica journalist, William Cohan, claiming he had an ‘unsettling’ focus on ‘the dated matter’.

Raymond declined to comment when contacted by DailyMail.com on Wednesday.