A $20 inflatable double water slide by Target has become the must-have item for summer – but it is so popular shoppers are saying it’s impossible to find.

The Happy Hop Ocean Park ‘fun park’ is currently advertised on the retailer’s site. However, it can’t be bought online and only appears available as a ‘click and collect’ product at certain stores.

One person recently took to Facebook to share a snap of the slide and ask advice on where to find it.

Within moments hundreds flooded the page with their best suggestions – yet only one was able to divulge the real reason for why it was so hard to track down.

One hopeful shopper took to the thread to say: ‘It’ll likely be a single unit at a single store, somewhere in Australia’.

‘I’ve called two stores,’ wrote one another adding: ‘It’s been removed from the system. They cant look it up.’

‘Sold out all over Melbourne,’ said one while chimed saying: ‘Sold out in most stores around Brisbane.’

Other commenters said the slide had also sold out in Adelaide, Townsville, the Gold Coast, Sydney and Perth.

‘Nothing in Newcastle. Bugger. Would have been a great Xmas present,’ said another.

Although the community was keen to help, one person finally revealed the real reason why the inflatable was so hard to find.

‘Its old stock,’ they said. ‘This was sold years ago I don’t know why a link for it even works.’

According to one person, old stock sometimes still appears online if you are doing a Google search for it, but when the item is searched for the website, it won’t be there. 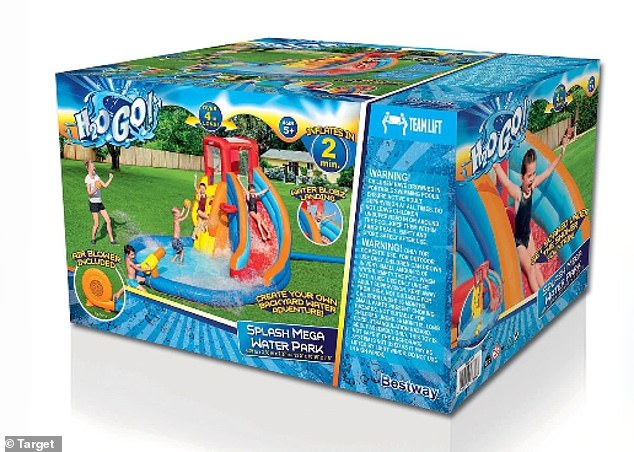 Although there is very little chance of the item appearing on Target’s shelves, the retailer does have an extensive collection of other inflatables.

The H2OGO! Bestway Inflatable Splash Mega Water Park is currently advertised on the retailer’s website for the sale price of $239.

Shoppers who’ve bought it have awarded it a five star ratings with one person that not only did the kids ‘love it’ but the set up was ‘super easy too’.

‘Easy assembly. Would recommend! Great for summer!’ Said another.

Big W is selling a very similar item, the Happy Hop Shark Double Water Slide for $699 that will be reduced to $499 for the Black Friday sale.