Taxpayers could fork out £400,000 a year to monitor Osama bin Laden’s spin doctor who is walking the streets of Britain again.

Adel Abdel Bary, 60, was jailed over the devastating 1998 attacks on US embassies in Kenya and Tanzania that killed 224 people.

But the terror propagandist won early ‘mercy’ release this week because his morbid obesity and asthma puts him at risk of Covid.

It has now been revealed that the Egyptian national will likely cost the taxpayer a fortune as both MI5 and counter-terror police need to monitor his movements ‘for several years’.

Adel Abdul Bary after he appeared at Bow Street Magistrates court in July 1999. He returned to the United Kingdom on Wednesday after being freed from a New Jersey detention centre

Adel Abdul Bary, then 54, wipes away tears while pleading guilty in Manhattan in 2014 before Judge Lewis Kaplan over terror charges related to the 1998 bombings in Africa

A former military intelligence officer told The Mirror: ‘They will want to know who he talks to, how does he communicate and what are his intentions.

‘This may cost three or four-hundred-thousand a year. He may have to be monitored discreetly for several years.’

Bary walked free from a customs enforcement detention facility in New Jersey on Tuesday and flew back to London on Wednesday.

He was born in Egypt but was granted asylum in Britain in 1991.

David Cameron’s government is reported to have struck a deal with Washington to accept Bary back into Britain upon his release to avoid a human rights breach.

Bary would likely be tortured and killed if deported back to Egypt.

Bary, whose son is an ISIS jihadi rapper, has returned to live with his wife Ragaa, 59, at their £1 million council flat in Maida Vale. 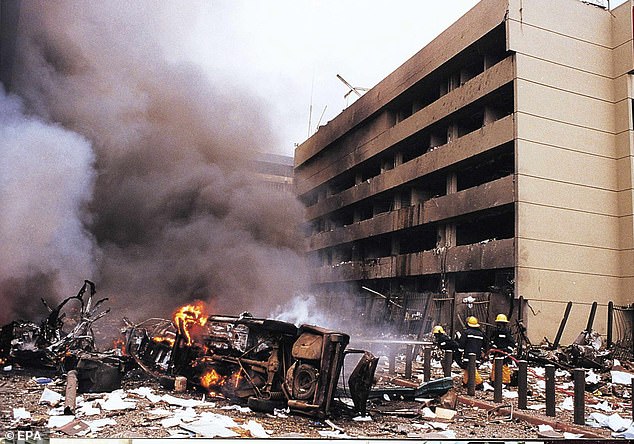 Bary, 60, was jailed over the devastating 1998 attacks on US embassies in Kenya and Tanzania that killed 224 people. Pictured; firemen in action at the site of a huge bomb explosion that shook a bank building and US embassy in central Nairobi, Kenya, 07 August 1998 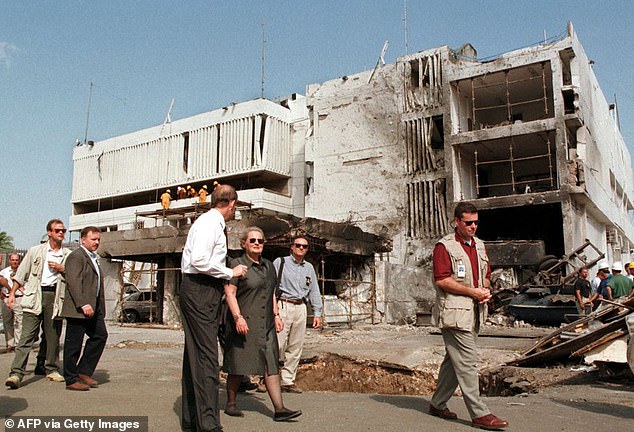 Then-US Secretary of State Madeleine Albright looks 18 August at damage from a bomb at the US embassy in Dar Es Salaam, Tanzania where 10 people were killed and 72 injured on Augustr 7, 1998

His lawyer told The New York Times: ‘After all this time all Mr Bary wants is to enjoy a quiet life with his family.’

Bary was arrested in the UK in 1999 and extradited to the US in 2012 where he struck a plea deal which ended with him being sentenced to 25 years behind bars.

He was charged with 285 offences, but pleaded guilty to just a handful, including threatening to kill by means of explosive and conspiracy to murder US citizens abroad.

The terrorist, who leased London offices in Kilburn Lane for bin Laden’s propaganda activities, had 16 years taken off due to the time he had spent on remand.

A security source told The Sun: ‘His return remains a huge headache for the Home Secretary.

‘She is intent on ridding the country of threats, but here’s a notorious terrorist dumped right on her doorstep.’

He is the father of ISIS jihadi Abdel-Majed Abdel, who was arrested in Spain after travelling to Syria where he posed with the severed head of an Assad regime soldier.

Bary’s lawyers had argued earlier this year that his morbid obesity was an ‘extraordinary and compelling’ reason to let him go.

The judge agreed that he should be released on compassionate grounds because the coronavirus was a great risk to his health, given his obesity and asthma. 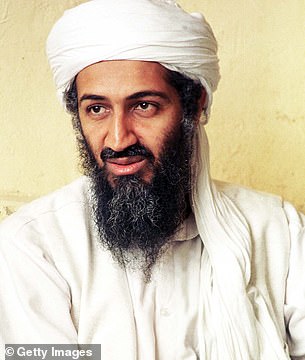 Bary had been serving his sentence in the ADX Florence supermax prison in Colorado before being shipped over to the east coast and then onto London.

He will not be placed under Terrorism Prevention and Investigation Measures because he has already served his sentence. 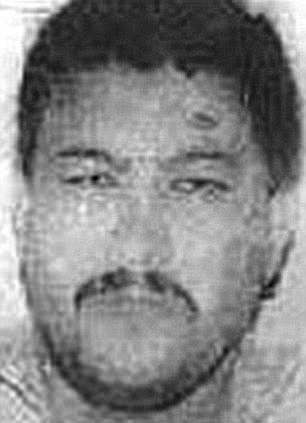 Sources told The Sun he will almost certainly claim welfare from the state and be granted security monitoring for his safety, costing the taxpayer tens of thousands.

Following the August 1998 African embassy bombings, Bary was responsible for transmitting claims of responsibility to the media.

In one of the court hearings leading to his sentence he wept before the judge after he admitted using fax machines and phone calls for the messages.

At his 2015 sentencing, Judge Lewis A. Kaplan had initially expressed concern that the plea bargain arranged with prosecutors was too lenient.

ADX Florence supermax prison where Adel Abdel Bary, 60, had been serving his sentence before being released to a holding facility on the east coast and then being moved onto London

Handing down a sentence of 25 years, much of it hacked away already by time spent on remand, Judge Kaplan told Bary that he was the beneficiary of an ‘enormously generous plea bargain.’

Bary expressed remorse, telling the judge: ‘If I could just do something to bring the victims back, your honor, I would have done it, but unfortunately I can’t.’

His 29-year-old son was captured by Spanish authorities in April this year after trying to sneak into the southern town of Almeria from north Africa.He was stripped of his British citizenship after fighting for Islamic State in Iraq and Syria.