Turner Classic Movies will hold a full roundtable discussion at the start of several of old Hollywood’s most celebrated films to warn viewers about ‘sexist and racist content’.

On Thursday, the cable network kicked off Reframed: Classic Films in the Rearview Mirror, a series where it says it examines the ‘troubling and problematic’ aspects of the classics, which were released from the 1920s to the 1960s.

Among the 18 flicks under the microscope include Breakfast at Tiffany’s, Psycho, Gone With the Wind, My Fair Lady, Stagecoach, The Jazz Singer, Seven Brides for Seven Brothers and more.

Several hosts will take turns holding roundtable introductions before the start of each movie where they will discuss the history and cultural context of the movie.

They will also warn viewers who have never seen these films before about potentially upsetting moments including depictions of racism, sexism, and LGBTQ issues.

Among the problematic aspects will be white actors portraying non-white roles or donning blackface.

HBO Max, the streaming service that airs TCM movies, has not said whether or not they will be pulling any of the films, or adding the roundtable discussion.

Reaction to the roundtable discussion has been varied, with some classic movie fans saying Americans should ‘speak of painful tradition. We aren’t going to 1984 ourselves to a more just and equitable society’.  Others said they’d had enough of ‘cancel culture’.

But some classics fans were in support of the discussions, with one saying: ‘I absolutely ADORE Breakfast at Tiffany’s, but it has the most racist portrayal of an Asian character that I’ve ever seen. Good gracious.’

TCM is launching a new series called Reframed: Classic Films in the Rearview Mirror to look at ‘troubling and problematic’ aspects of old Hollywood movies such as Gone With the Wind for its portrayal of happy slaves in the Old South. Pictured: Vivien Leigh has her corset tightened by Hattie McDaniel in Gone With the Wind 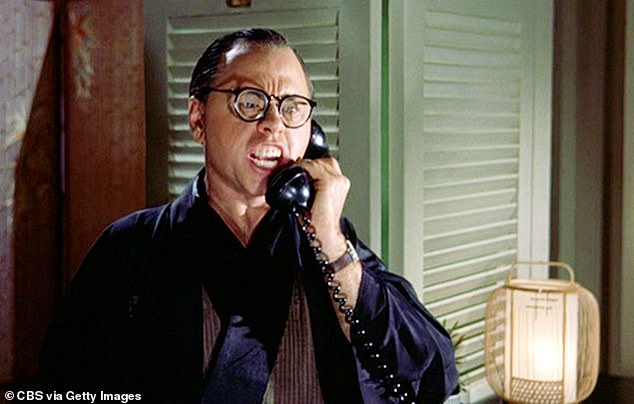 The 18 films will be discussed for issues such as racism, sexism and LGBTQ issues, such as Mickey Rooney playing Mr Yunioshi in Breakfast at Tiffany’s (above)

‘We know millions of people love these films,’ TCM host Jacqueline Stewart, who is participating in many of the conversations, told the Associated Press.

‘We’re just trying to model ways of having longer and deeper conversations and not just cutting it off to “I love this movie. I hate this movie”. There’s so much space in between.’

Stewart, a University of Chicago professor who in 2019 became the channel’s first African American host, has spent her career studying classic films, particularly those in the silent era, and black audiences

She knows first-hand the tension of loving films that also contain racial stereotypes.

‘I grew up in a family of people who loved classic films. Now, how can you love these films if you know that there’s going to be a maid or mammy that shows up?’ Stewart said.

‘Well, I grew up around people who could still love the movie. You appreciate some parts of it. You critique other parts of it. That’s something that one can do and it actually can enrich your experience of the film.’

Every Thursday for the month of March, rotating hosts will hold roundtable introductions about the history and context of the movie and warn viewers of upsetting moments

For Psycho, the hosts talk about transgender identity in the film and the implications of equating gender fluidity and dressing in women’s clothes with mental illness and violence.

It also sparks a bigger conversation about sexuality in Alfred Hitchcock films.

During the My Fair Lady conversation, they talk about why the film adaptation has a less feminist ending than the stage play, and Henry Higgins’ physical and psychological abuse of Eliza Dolittle. 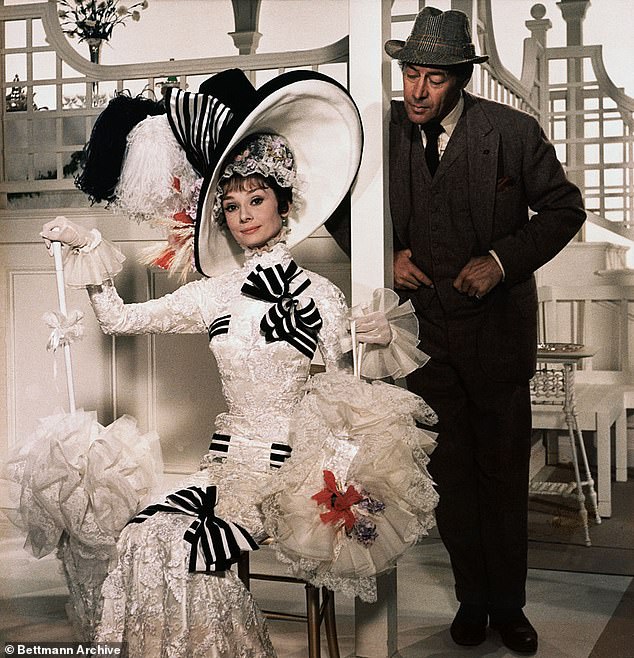 During the My Fair Lady conversation, the hosts will discuss Henry Higgins’ (right, played by Rex Harrison) physical and psychological abuse of Eliza Dolittle (left, played by Audrey Hepburn) 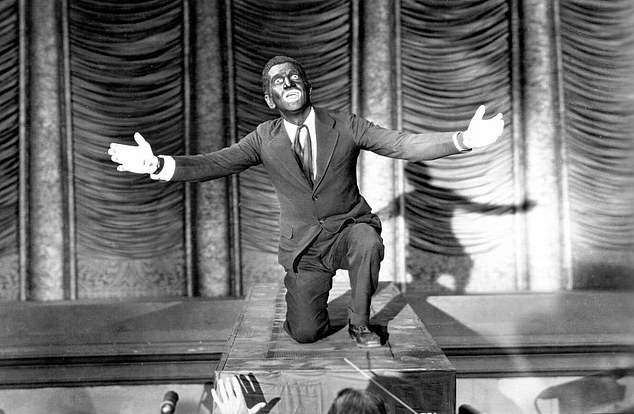 Among the films up for discussion are The Jazz Singer, considered the first talking picture, for Al Jolson’s blackface routine (above) 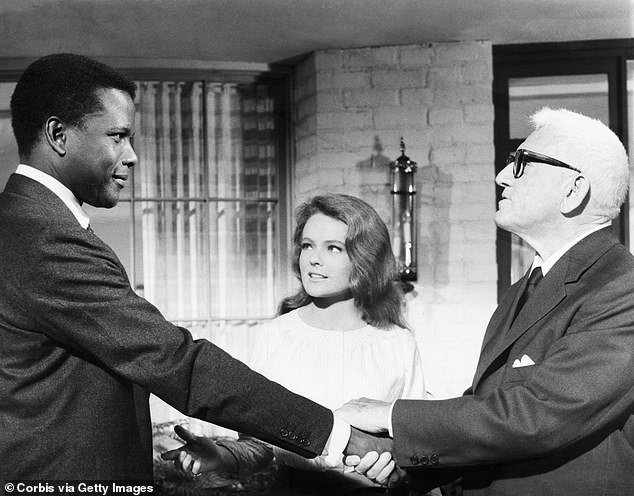 For the discussion of Guess Who’s Coming to Dinner, the hosts will look at aspects of black actor Sidney Poitier’s films that are oriented primarily to white audiences. Pictured, left to right: Poitier, Katharine Houghton and Spencer Tracy in the movie 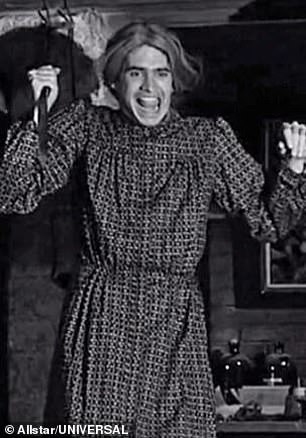 For Psycho, the hosts talk about transgender identity in the film and the implications of equating gender fluidity and dressing in women’s clothes as done by Norman Bates (played by Anthony Perkins) with mental illness and violence

Not feeding her and stuffing marbles in her mouth are played for cute laughs in the film. Is it a commentary on misogyny or just plain misogyny?

And on the night that Guess Who’s Coming to Dinner will air, Stewart discusses the complex legacy of actor Sidney Poitier, who plays a black man engaged to a white woman, to the horror of her family.

‘His career is so important for the ways that white Americans really started to have more sympathy and understanding of black people,’ Stewart said.

‘But at the same time, there are aspects of his films that are clearly oriented primarily to white audiences. That opens up all kinds of complications for black viewers who felt that he wasn’t a representative of the race as a whole.’

Classics fans were quick to take to Twitter to voice their support over the decision to host the roundtables, but others slammed it as ‘cancel culture’.

One user, @natetheworld tweeted: ‘Don’t ban Dr. Seuss. Discuss his racism. Don’t edit Gone with the Wind. Talk about slavery in the south. Don’t remove black face from Golden Girls. Speak of the painful tradition. We aren’t going to 1984 ourselves out to a more just and equitable society.’

Another, @ewing_34, said she was ‘sick’ of cancel culture. ‘I’ve had enough of that nonsense after reading My Fair Lady is now “problematic”. Like my mother just said we need to drive the culture police crazy’.

‘So TCM is “looking into” getting rid of 18 movies including Breakfast at Tiffany’s and My Fair Lady! All because they are not woke movies! Sick,’ user @Pensgirl84 tweeted.

But other movie buffs were in full support of the discussions, with @KellyTrude saying: ‘I love My Fair Lady but does anyone think My Fair Lady ‘isnt’ troubling!?!’

@inb4den tweeted: ‘I absolutely ADORE Breakfast at Tiffany’s but it has the most racist portrayal of an Asian character that I’ve ever see. Good gracious’.

Another user, @mogulseeker suggested cutting scenes instead of canceling the movie. ‘I love Breakfast at Tiffany’s, and if they just took out hte Rooney scenes from teh movie, it wouldn’t negatively impact the film at all.’

User @BillBriouxTV said ‘kudos’ to TCM for ‘tackling the thorny issue of questionable content in classic films’, while another – @captainpearson – responded by sayind that Breakfast at Tiffany’s is ‘such a delightful fun film – except for the Mickey Rooney parts, which are so unnecessary, insulting and unfunny. Roony was so charming in so many parts, hard to believe they did it!’

Companies have lately taken to adding disclaimers before shows and films depicting outdated or stereotypical characters and themes.

And in some instances, films have just been made unavailable. Disney has said that its 1946 film Song of the South will never be on Disney+.

Recently, it was revealed that Walt Disney Company holds monthly meetings with advocates from women and minority groups who comb through hundreds of hours of Disney-streamed content looking for potentially offensive material to flag.

The goal of Reframed Classics is to help give audiences the tools to discuss films from a different era and not just dismiss or cancel them.

And Stewart, for her part, doesn’t believe that you can simply remove problematic films from the culture.

‘I think there’s something to be learned from any work of art,’ Stewart said.

‘They’re all historical artifacts that tell us a lot about the industry in which they were made, the cultures that they were speaking to.’

Every Thursday, through March 25, four to five movies will be ‘Reframed’ beginning at 8pm ET.

Tarzan, the Ape Man – Portrayal of Africans including one attack by ;a tribe of aggressive dwarfs’

The Children’s Hour – Portrayal of LGBTQ issues when two female teachers are accused of ‘sinful, sexual knowledge of each other;