Teacher, 25, ‘manipulated high school student into having sex with her and provided him alcohol’

Substitute teacher, 25, is arrested for ‘providing high school student with alcohol and manipulating him into having sex with her’

Alexis Mercedes Boberg, 25, turned herself in to authorities in Anne Arundel County in Maryland on Monday

A suburban Baltimore substitute teacher has been charged after she allegedly had sexual encounters with a high school student and gave him alcohol.

Alexis Mercedes Boberg, 25, turned herself in to authorities on Monday after a student at North County High School reported her on June 4 for engaging in sexual activities with him and for providing him with alcohol.

Boberg has been charged with two counts of fourth-degree sex offense for having a sexual contact with a person while in a position of authority, The Baltimore Sun reported.

She has also been charged with consuming alcohol on public property.

Fourth-degree sex offense is a misdemeanor punishable by up to a year in jail. It also requires registering as a sex offender.

Investigators learned that Boberg and the student exchanged phone numbers in May.

Boberg and the student allegedly had numerous meetings away from school grounds last month.

Police allege that during those encounters, Boberg and the teen engaged in sexual activity. Boberg also provided the teen with alcohol.

After school officials learned of the allegations on June 4, they fired Boberg.

A day later, the teen’s mother filed for a peace order – which is a court order seeking protection for certain people who are not eligible to petition for a protective order. 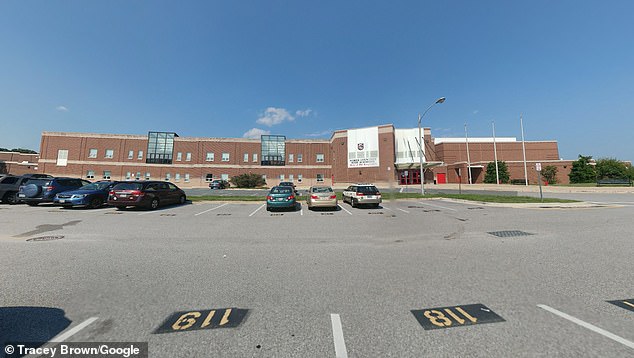 On June 4, a student at North County High School (above) reported her for engaging in sexual activities with him and for providing him with alcohol

‘During the last 20 days, my son has been manipulated into a sexual relationship (with) his substitute teacher at school,’ the teen’s mother wrote in the application for the peace order.

A judge barred Boberg from having any more contact with the teen. Boberg has also been ordered to stay away from the mother’s place of employment.

Police say a search of Boberg’s home turned up evidence to support charges against her.