Teacher loses it in class and begins hurling textbooks

Brought to book: Furious teacher loses it in class and begins hurling textbooks around because her students have not done their homework

A furious teacher has been suspended after she threw textbooks around the classroom because her students had not done their homework in Thailand.

Khun Sudawan was checking the projects during a Thai language class but she became angry after finding out that most of  the pupils had not finished their assignment on March 3.

As she was yelling at the teenage students – aged between 16 and 17 – some of the youngsters sitting at the back of the room began recording her.

Footage shows the Sudawan hurling the textbooks at the front of the class before walking up to a student and slapping him around the head with a book. 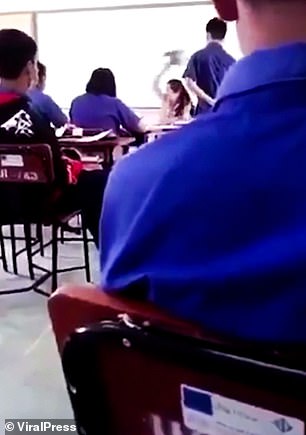 Video of the incident was given to teachers and bosses who opened an investigation at the Manchasuksa state secondary school in Khon Kaen province.

Wichian Chanosi, the school’s deputy director, said the board had suspended Ms Sudawan while investigations are ongoing.

He said: ‘She is now suspended and we have issued her with a warning for her aggressive behaviour. A substitute teacher will handle her class in the meantime.’

Wichian said the teacher had already apologised to school officials and the students, some of whom had accepted the apology and said sorry to her in return for not doing the work.

Amarit Tuankham, one of the students in the class, said that Sudawan was committed to teaching and had good intentions for students.

She said: ‘We were wrong not to finish our homework. She can be emotional sometimes but we did not expect that she would throw a tantrum like that. 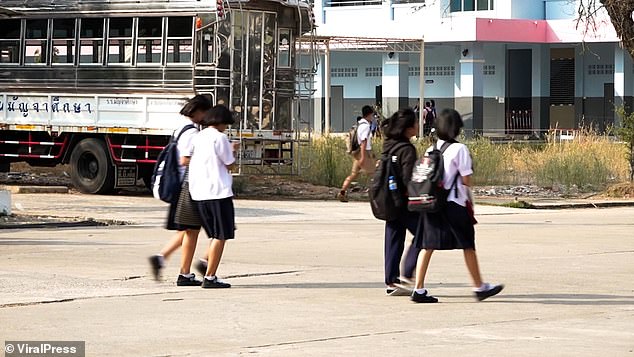 Video of the incident was given to teachers and bosses who opened an investigation at the Manchasuksa School state secondary school in Khon Kaen province. Pictured: Pupils at the school 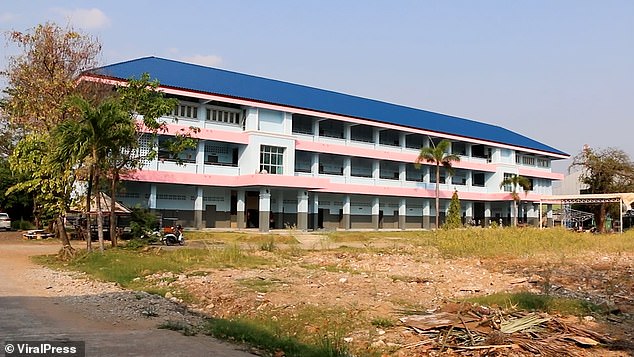 Wichian Chanosi, the school’s deputy director, said the school board had suspended the teacher while investigations are ongoing. Manchasuksa state secondary school pictured above

‘I feel guilty for triggering her anger so I apologised to her. I hope she will be able to return to work.’

However, the student who filmed the incident, Nantaporn Paedmod, said Sudawan deserved her punishment as she should not have acted aggressively.

She said: ‘I refuse to apologise to her. I did nothing wrong. She should not have acted aggressively.’

The incident had been reported to the local Secondary Educational Service Area Office to investigate whether the teacher should return to work or have her teaching license revoked among other punishments.