Teacher warns parents against talking about diets to kids

Mothers should avoid talking about dieting in front of their daughters because it could make them more vulnerable to eating disorders, a girls’ school leader has warned.

In a letter to parents, Fionnuala Kennedy said that even throw-away comments about wanting to lose weight can have a profound effect on teenage girls.

Her plea came after Miss Kennedy, deputy head at £18,000-a-year Wimbledon High School, said she was horrified by controversial Netflix drama To The Bone, which has been accused of ‘glamorising anorexia’.

Fionnuala Kennedy, deputy head at Wimbledon High School has written to parents warning them of the dangers posed by shows such as Netflix’s To The Bone and dieting

Branding the film ‘irresponsible’, she said she was worried that girls would watch it during the holidays, and think that anorexia was ‘cool’.

And she warned mothers that while it may be fashionable to talk about cutting out food groups and adopting diet trends like ‘clean eating’, this may not be the best way to act as a role model.

Instead, they should ‘advocate a rounded, healthy diet’ so as not to give the impression that ‘thin is just better’.

In a letter to parents about how to deal with the pressure faced by girls, she wrote: ‘Role model as effectively as you can.

‘It’s difficult to advocate a rounded, healthy diet for your teen if you’ve cut out carbs and dairy yourself, or frequently refer to your desire to lose weight.’

‘We are all a bit culpable – it’s quite a middle-class thing talking about cutting out food groups and clean eating,’ she told the London Evening Standard. 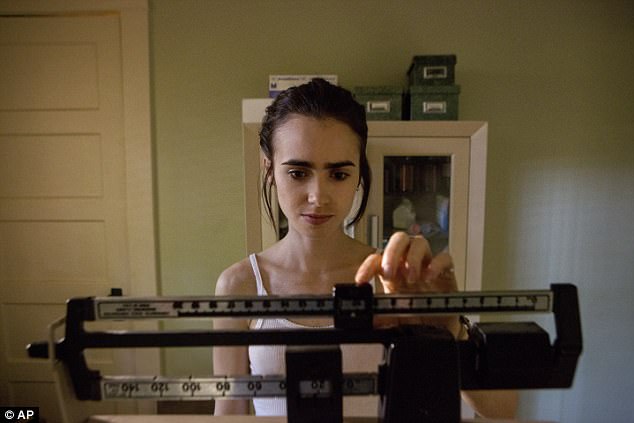 Ms Kennedy, said she was horrified by To The Bone, featuring Lily Collins, pictured

‘As a teacher when you come back from holiday and speak to your colleagues, one of the first things middle-aged women will say to each other is, “You look fantastic – have you lost weight?”.

‘It’s ingrained in us as women, so we have to be really careful because these messages are picked up all the time. We are all role models. Mothers, teachers, aunts – you will be looked up to even if you don’t realise it, and it is your job not to propagate the idea that thin is just better.’

Miss Kennedy said she watched To The Bone, in which Lily Collins plays a 20-year-old with anorexia, to keep ‘in step’ with her pupils.

But she branded the film ‘irresponsible’ and said Netflix had a duty not to glamorise mental health issues. ‘To The Bone, with its emphasis on anorexia as an act of rebellion, as “sexy” even, only adds to the “thin is cool/right/attractive” argument,’ she said.

The film’s writer and director Marti Noxon, who struggled with anorexia and bulimia as a young woman, said earlier this year: ‘In an effort to tell this story as responsibly as we could, we spoke with other survivors and worked with [eating disorders charity] Project Heal … My goal was not to glamorise eating disorders, but to serve as a conversation starter.’