A former Team GB Paralympic rower has opened up about her eating disorders and claims she was given ‘no support’ from her coaches when she went to them for help.

Rachel Morris, 41, from Guildford, Surrey, won gold at the Summer Paralympics in 2008 as a handcyclist and then took gold again at Rio in the women’s single sculls as a rower in 2016.

Speaking to former athlete Colin Jackson in BBC Panorama’s Sport’s Hidden Crisis, which airs tonight, Rachel said she believes there are a large number of athletes who, like her, are struggling with disordered eating or a specific eating disorder.

Having been diagnosed with anorexia at 18, which later developed into bulimia, she claimed she witnessed athletes go to extreme lengths to achieve their weight goals ahead of competitions.

Former Team GB Paralympic rower Rachel Morris, 41, from Guildford, Surrey, has opened up about her eating disorders and claims she was given ‘no support’ from her coaches when she went to them for help

She explained: ‘You’ve got the athletes who don’t make their weight, and so are in a room the morning before they get weighed, a hotel room, where you’ve got indoor rowing machines inside, with a heater on and then with black bin liners over you, and that that’s acceptable to sweat off that weight to be able to drop that last half kilogram, whatever it is, to be able to meet the weight for your race.

‘To me, that’s just an eating disorder factory.’

Asked whether coaches were present when this happened, she replied: ‘They were standing around, absolutely, they’re standing there. It’s part of the hotel booking.’

She added that she ‘strongly believes’ an athlete not making their weight could ‘absolutely’ encourage them to develop an eating disorder. 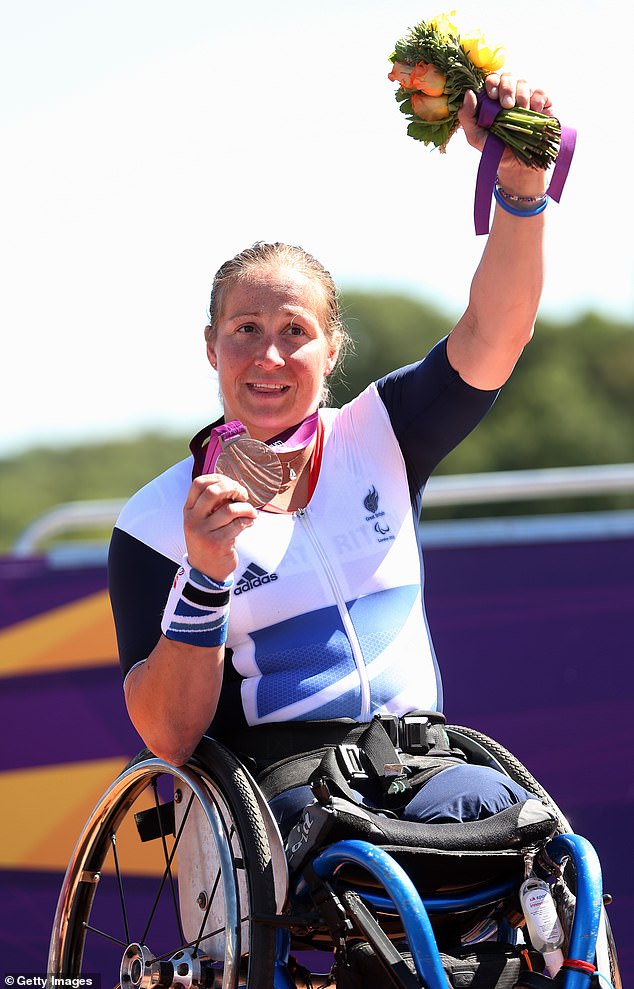 Rachel also alleged that she told a member of staff from GB Paralympic Rowing about her issues in the run up to Rio – but was told she was a ‘nutter’ and ‘the weakest link in the team’.

‘The biggest thing I took out of it was that I was the weakest link in the team and I was the one that if I cracked, I was going to be the one that let the whole team down,’ she said.

‘Those comments are not throwaway comments.’

She added that she was ‘not alone’, claiming: ‘I think that there are a serious number of athletes who are either struggling with disordered eating or a specific eating disorder.’

The programme put Rachel’s claims to Dame Katherine Grainger, a former rower who is Great Britain’s most decorated female Olympian and the current chair of UK Sport. 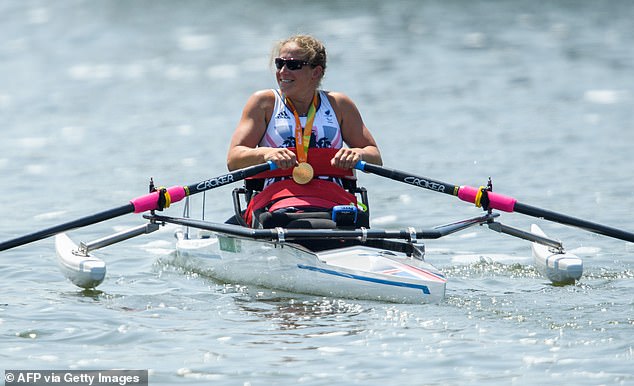 Rachel took gold at the Paralympic Games in Rio de Janeiro, Brazil, in September 2016 in the women’s single sculls 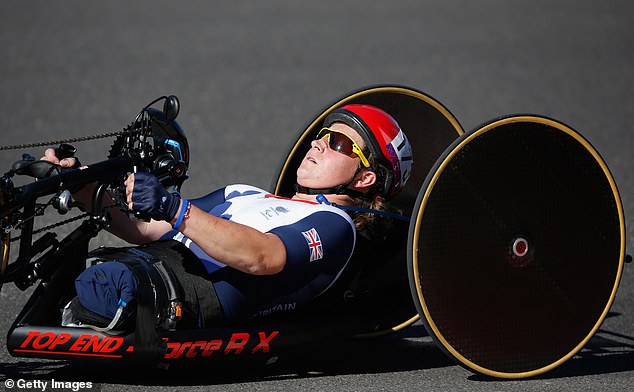 Rachel won gold at the Summer Paralympics in 2008 as a handcyclist. Pictured during the Women’s Individual H 1-3 Road Race on day nine of the London 2012 Paralympic Games at Brands Hatch

‘I would say from a lot of the stories we’ve heard recently, there’s a lot of athletes who still aren’t comfortable about speaking up,’ she admitted.

‘I think what we need to do is, as difficult as it is to hear some of the really negative stories that you hear about athletes having experienced in their sporting careers, I do – I hate that they exist and those stories have happened, but I want to know about them.

‘I still think the vast majority have had a very fulfilling, brilliant time, but for those ones who haven’t had that opportunity then we need to address why not and the more we hear about the issues and the challenges that are there, the more we heard about the blocks to athletes having a positive experience, the more we can address them.’ 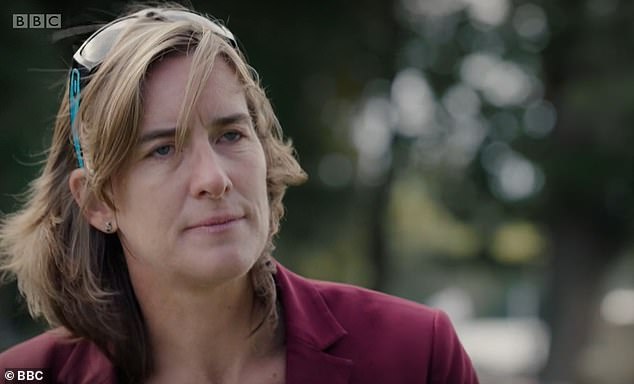 The programme put Rachel’s claims to Dame Katherine Grainger, a former rower who is Great Britain’s most decorated female Olympian and the current chair of UK Sport. She said she believes there are a lot of athletes who still aren’t comfortable about speaking up

In response to Rachel’s claims, British Rowing denied anybody was called a ‘nutter’ and also said there were no weak links on the Paralympic team.

They told BBC Panorama that they take all aspects of athlete health and welfare very seriously and say they believe that currently none of the athletes in their senior squards have declared or known eating disorders.

They added that they cannot categorically deny the anecdote about bin liners as an athlete may have done this without informing staff or coaches.

What is anorexia and how does it differ to bulimia?

Anorexia is an eating disorder and a mental health condition. People diagnosed with it try to keep their weight as low as possible by eating little or excessive exercise.

Those with anorexia can have a distorted image of their bodies, thinking their fat when in fact they are severely underweight.

Long term health complications can include muscle and bone problems, loss of sex drive, kidney or bowl problems or having a weakened immune system.

Bulimia is an eating disorder characterised by binge eating and purging – by self-induced vomiting and laxative abuse.

Treatments can include therapy and medication. The condition typically develops during adolescence or early adulthood.