Behind the scenes secrets of Suranne’s nuclear sub: Team who built HMS Vigil for new BBC thriller were inspired by The Hunt For Red October

By Claudia Joseph For The Mail On Sunday

It’s the BBC’s latest flagship thriller from the award-winning team behind Line Of Duty and The Bodyguard – a tense underwater drama on board HMS Vigil, a fictional Trident nuclear submarine.

But despite a stellar cast including Martin Compston and Suranne Jones, the star is the set, which recreates the interior of a 490ft vessel – a mystery in itself because such details are classified as top-secret by the Royal Navy.

Designer Tom Sayer has described the challenges designing a replica of a 16,000-ton Vanguard-class Trident sub without access to any drawings or photographs.

He says his team were forced to come up with ideas by watching Hollywood thrillers such as Crimson Tide and Sean Connery’s 1990 classic, The Hunt For Red October.

‘It was very difficult to find out details,’ he said.

Designer Tom Sayer has described the challenges designing a replica of a 16,000-ton Vanguard-class Trident sub without access to any drawings or photographs (Pictured: Still from BBC series)

‘There are definite dark areas of our knowledge of the submarine interior, but nobody was willing to tell us or nobody knew.

‘What does the nuclear reactor that actually powers the engine look like? Nobody knows. We had to take our cues from Hollywood and people who had done it before.

‘We had a couple of submariners who were consultants on the show – we would show them sketches of our layout and ask questions like “Is this where the missile deck is in relation to the control room?” and they would say yes or no.

‘We built miles and miles of corridors – it just goes on and on.’

The six-part series tells the story of a police investigation into the death of a crew member in HMS Vigil.

Suranne Jones stars as DCI Amy Silver, who must board the vessel, while Martin Compston, who played Steve Arnott in Line Of Duty, is cast as submariner Craig Burke.

The three sets mimicking the sub’s interiors were built at the BBC’s studios in Dumbarton, west of Glasgow, and were up to 160ft long.

‘I would say we used almost a kilometre of pipe of different diameters and enough grey paint to fill a swimming pool,’ added Sayer. 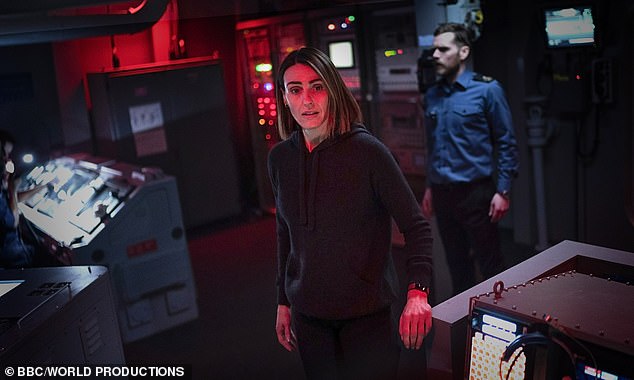 Suranne Jones stars as DCI Amy Silver (pictured), who must board the vessel, while Martin Compston, who played Steve Arnott in Line Of Duty, is cast as submariner Craig Burke

‘We also used 600 yards of aluminium strip, 50 yards of ladders and stairs and 100 square yards of metal grille flooring.’

Jones said: ‘The set just blew my mind. The size of the subs in real life is extraordinary – they’re four floors, with a bomb shop and missile room. Filming on the set was claustrophobic.

‘I mean, the beds alone… there’s a scene where Amy tries to get in her bunk bed. I’m quite tall, and the director said, “Can you get up there more gracefully?” Because I couldn’t do it, they’re so small.’

Without giving anything away, Sayer has also admitted he designed part of the set to flood.

‘It’s a very complicated thing to do, to fill up a section of a set and have people flailing about inside it.’

Vigil is on BBC1 at 9pm tonight and tomorrow, continuing every Sunday night.