Meghan Markle’s mother broke down in tears as she said she felt she ‘couldn’t protect her’ when the Duchess of Sussex experienced suicidal thoughts.

Doria Ragland, who lives close to Prince Harry and Meghan in California, wiped away tears as she said it had been hard for her to hear that her daughter was suffering from low mental health while she lived in the UK.

She made the revelations in the fourth episode of the couple’s explosive Netflix docuseries, which was released today.

Doria Ragland, who lives close to Prince Harry and Meghan Markle in California, wiped away tears as she said it had been hard for her to hear that her daughter was suffering from low mental health while she lived in the UK

‘That she would actually think of not wanting to be here, that… that’s not an easy one for a mum to hear.. You know,’ Doria said.

Speaking in a later episode, Doria also revealed she knew ‘the stress they were under. It felt like they were running.’ 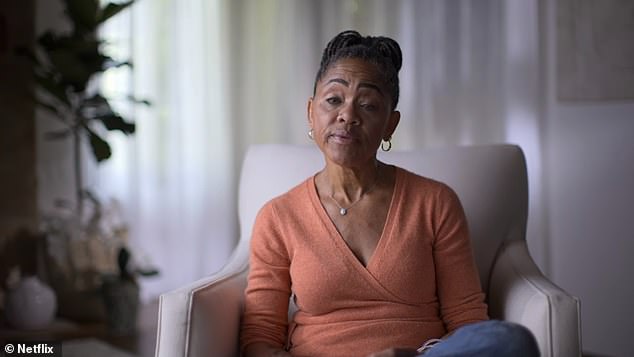 The Sussexes’ six-part show – which forms part of their multimillion-pound deal with Netflix – has become the streaming giant’s most-watched documentary in a premiere week, debuting with 81.55million hours viewed.

Doria makes several other appearances in the programme’s new episodes.

Describing the drive to St George’s Chapel on her wedding day, the Duchess says, five minutes into episode four: ‘Me and my Mom looked at each other and said “What is going on?!'”

Meghan reveals that the two women were shocked by how many people turned out to ‘line both sides of the street’ to greet her during the 15-minute drive to her wedding venue in May 2018.

Viewers see footage of Doria and Meghan travelling in the wedding car. Moments earlier, Meghan explains how ‘surreal’ it was to get married in such a lavish location, saying: ‘When I got to the castle – castle – how funny is that!’

Doria is also seen taking part in the launch of Together, a cookbook that Meghan worked on with the a group pf women who were involved in the supporting their community after the Grenfell Tower Fire in 2017.

The Duchess of Sussex said in the docuseries she suggested the idea of the cookbook in order to fund the initiative. She went on to write the book’s foreword when it was published.

During the book launch, Doria is seen talking to some of the attendees, never straying too far from Meghan.

Elsewhere in the documentary, it’s revealed that Doria stayed with her daughter and son-in-law for a month after Meghan gave birth to Archie.

Meghan’s mother stayed at Frogmore Cottage, and was present when her daughter brought Archie home from the hospital.

The Duchess said: ‘My mom stayed for a month solid, and it was great to have her there.

Doria is shown spending time with her grandson as an infant, holding him in her arms in a selfie shared in the docuseries.

She also appears in unseen wedding snaps, that show her cheering while standing alongside Camilla and Prince William at Windsor Castle.

Doria also features prominently in family snaps of the couple’s home life in California, alongside her two grandchildren.

At some point, footage shows her playing football in the Sussexes’ garden in Montecito.

And: The final days at Frogmore: Meghan and Harry say packing up Windsor cottage before move to California was ‘bittersweet’ and ‘gave us a chance to look back at our whole love story’