Boris Johnson’s unexpected claim he spends his spare time painting model buses could have been an ingenious ploy to change the search results which come up when people Google his name, tech experts claim.

Previously the search term ‘boris bus’ would bring up negative reviews of the new Routemaster buses he introduced as London mayor, and his divisive 2016 claim that the UK sends £350m a week to the EU – famously written on the side of a bus.

Use that search string today however, and you will see a list of articles and videos about Boris’s unexpected hobby.

British digital agency Parallax, experts in the art of search engine optimisation and manipulating google’s search results, believe that may be deliberate.

Mr Johnson told TalkRadio: ‘I like to paint or I make things. I get old wooden crates, right? And I paint them… I turn it into a bus’

Speaking to TalkRadio’s Simon McCoy on Monday, the former Foreign Secretary left his interviewer open-mouthed when he talked of his love of turning old wine crates into painted model buses.

‘I like to paint or I make things,’ he said.

‘I get old wooden crates, right? And I paint them. I suppose it’s a box that’s been used to contain two wine bottles. It will have a dividing thing, and I turn it into a bus and I put passengers…

‘I paint the passengers enjoying themselves on the wonderful bus. Low carbon, of a kind that we brought to the streets of London that reduces CO2, reduces nitrous oxide, reducing pollution.’

The meandering explanation, during which Mr Johnson at times seemed to look almost embarrassed, provoked discussion and confusion on social media. 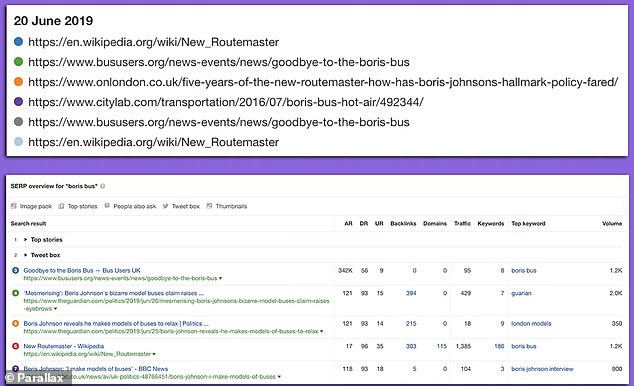 In a blog post they described how news articles about the interview had pushed negative coverage down the search engine results pages into positions with negligibly low click through rates compared with their previous prominence.

The post states: ‘To us here at Parallax – and anyone else with a modicum of knowledge about search rankings – there’s something amiss in the would-be Prime Minister’s choice of relaxation.’

It speculates the claim could be part of a long-term SEO [search engine optimisation] strategy. 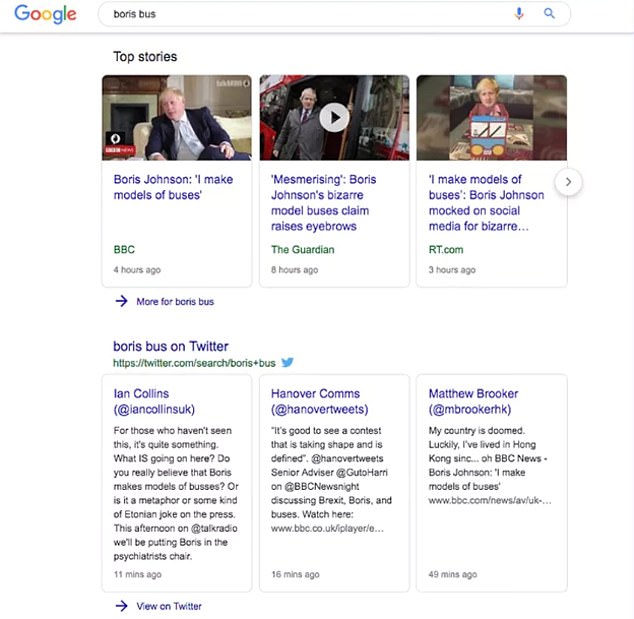 A test search condicted by Parallax after the interview showed links, videos and tweets about the former Foreign Secretary’s recent comment, and very few about his previous, chequered, history with buses 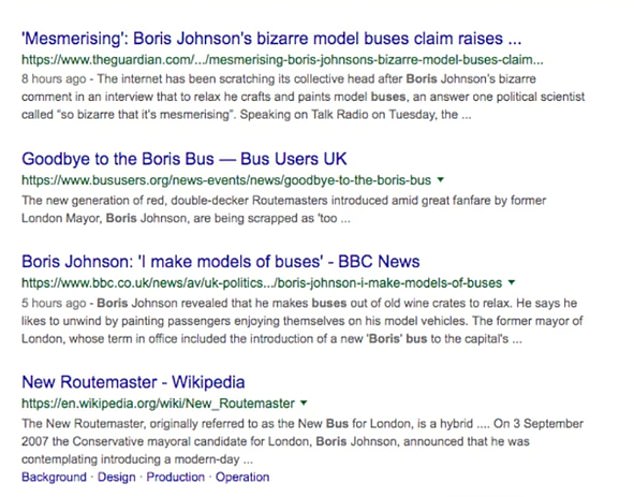 Coverage of the TalkRadio interview by the Guardian and the BBC pushed down older, more negative, search results

The post continues: ‘The Conservative MP has had a dubious history with buses; images of him in front of a red bus with the words “We send the EU £350 million a week” plastered across the side are easy to find, and the relatively recent failing of his redesigned London Routemaster buses had no end of complaints popping up across the internet.

‘Doesn’t it then seem likely then that, now, during his campaign to be Prime Minister, that Boris would want to push down any mention of these on Google? We think so.’

Parallax concludes: ‘Not only has Boris used his infamous “dead cat strategy” to move the conversation away from him and Carrie Symonds and his plans for Brexit, he’s managed to push down his past mistakes on Google, too – making it more difficult for people to get a quick snapshot of relevant information.

‘And judged by the standards of an SEO campaign, it’s hard to describe it as anything other than a resounding success.’ 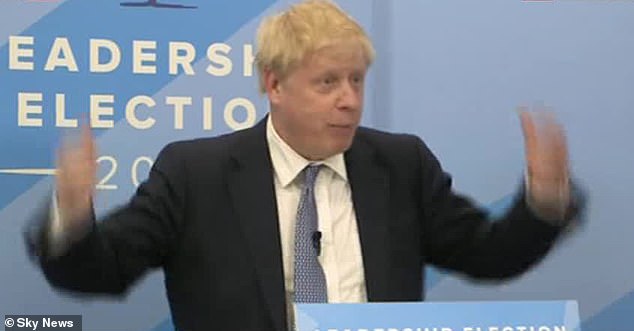 There is no evidence the firm’s analysis is correct – google’s results are dynamic and the search engine’s algorithm serves the content it concludes will be most relevant to most people.

Content from authoritative sources like news outlets – and newer, fresher content – will usually push down older less-well-credentialled results, like for instance the bus users’ forum webpages which made up two of the previous top six results.

And ex-BBC correspondent Guto Harri, who worked for Mr Johnson when he ran the Capital, told Newsnight: ‘I know he’s a talented painter and I know that he used to genuinely paint little egg boxes.’

Today it even emerged that Boris Johnson’s alleged artistic fascination with buses goes further than his crate conversion habit – his doodle of a double decker raised £1,000 for charity. 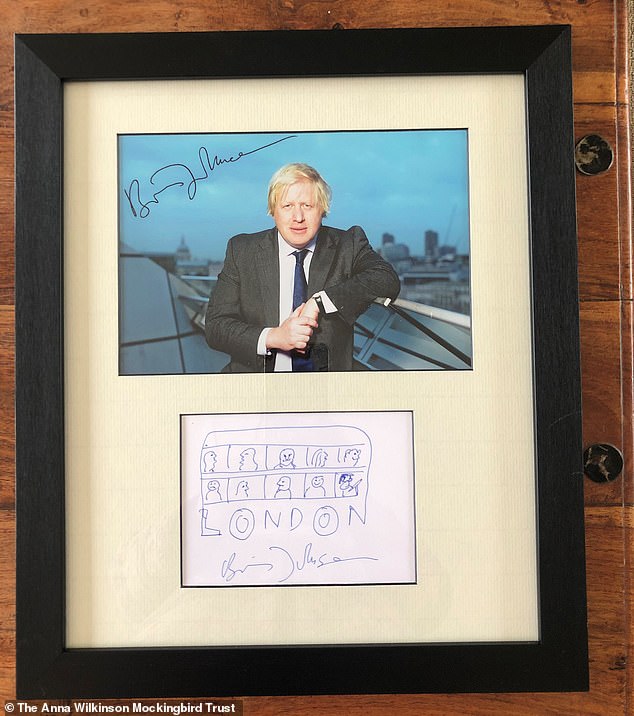 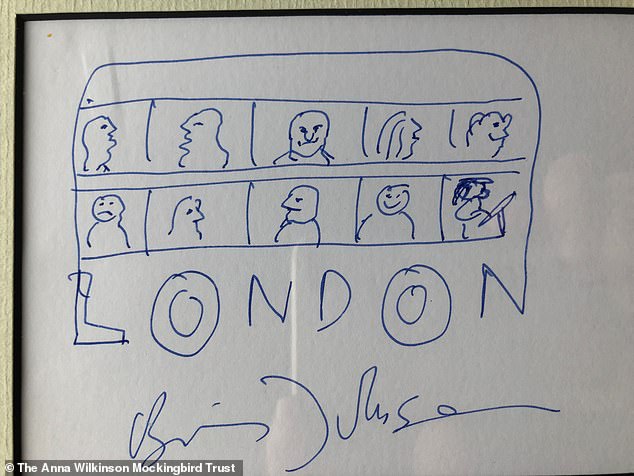 The pen and paper drawing combined the word ‘London’ into a drawing of a double decker, with the letter O as the wheels

If this is truly a Machievellian scheme to control Google’s results, it has been a long time in the making.

As long ago as 2011 Mr Johnson told the Metro newspaper: ‘I like to relax by painting on cheese boxes. You get Brie and Camembert in these lovely wooden boxes.

‘Now it might sound cretinous – and I’m not a very good painter – but I enjoy it and find it therapeutic.

‘I paint the whole thing white with a tube of children’s paint and I look for something to paint.

‘The last thing I painted was a picture of one of my family in front of the Colosseum in Rome. I also like painting whisky bottles.’ Guti Harri, who worked for Mr Johnson when he ran the Capital, told Newsnight: ‘I know he’s a talented painter and I know that he used to genuinely paint little egg boxes’ 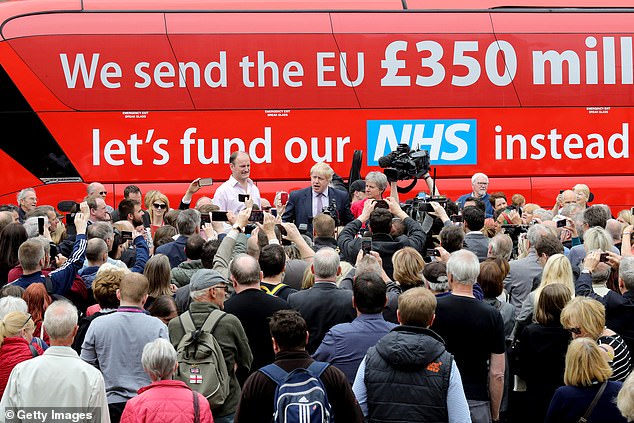 In the 2016 EU referendum campaign Mr Johnson campaigned with a bus reading ‘We send the EU £350 million a week let’s fund our NHS instead’. Opponents argued using the gross figure – ignoring the British rebate and EU inward investment – was highly misleading

Mark Fullbrook is an election strategist and business partner of Lynton Crosby – the ‘Wizard of Oz’ credited with masterminding David Cameron’s election victory in 2015.

He previously worked on Mr Johnson’s re-election bid as London Mayor in 2012, when he defeated Labour opponent Ken Livingstone.

However, Mr Fullbrook gained greater notoriety during the 2016 mayoral campaign, when he ran operations for Tory nominee Zac Goldsmith.

Facing Labour’s Sadiq Khan, the Goldsmith team was widely accused of running a ‘dog whistle’ campaign which stirred up prejudice against a possible Muslim mayor.

Both Mr Goldsmith and Mr Cameron linked Mr Khan to Muslim extremists during the campaign.

Mr Cameron sparked Labour fury by twice using Prime Minister’s Questions in the Commons as a launchpad for attacks on Mr Khan’s appearance on platforms alongside ‘extremist’ individuals.

The tactics failed and Mr Khan comfortably won the election.

The firm’s lobbying work, including with the tobacco industry, has also attracted controversy.

Mr Johnson has a long history with buses. In 2013, while mayor of London he  introduced a new fleet of red double-decker diesel-electric hybrid Routemasters with folding doors to allow people to get on and off easily.

He described it as a ‘stunning piece of automotive architecture’ and they were quickly dubbed the ‘Boris bus’ but many Londoners complained the air conditioning barely functioned leaving them sweltering in summer and freezing in winter.

Sadiq Khan said in 2017 he would stall purchases of the expensive new fleet.

And earlier this month Mr Johnson won a High Court challenge against a court summons over claims he made during the referendum campaign that the EU receives £350million a week from the UK.

The private prosecution by campaigner Marcus Ball centred on alleged offences relate to Mr Johnson’s ‘adoption and promotion of one of the central slogans’ of the Vote Leave campaign – including being written on the side of a bus.

The Brexit battle bus was emblazoned with the slogan: ‘We send the EU £350million a week let’s fund our NHS instead’.

But critics argued by using the gross figure, and ignoring the British rebate and EU inward investment, Mr Johnson was knowingly overstating the cost of EU membership.

The former Foreign Secretary’s legal team challenged the summons for him to attend Westminster Magistrates’ Court over three allegations of misconduct in a public office. And two High Court judges took barely five minutes to quash the case.

A representative for Mr Johnson did not immediately return MailOnline’s request for comment.