Teen, 18, is stabbed to death in south London – the second teenager to be fatally knifed in two days

Teen, 18, is stabbed to death in south London – the second teenager to be fatally knifed in the capital in less than 48 hours

A teenager has been stabbed to death in London to become the second knife death in the capital in less than two days.

The 18-year-old was fatally knifed in Brixton, south London, this afternoon.

Police and paramedics battled to save the man’s life, but he was pronounced dead at the scene.

A 17-year-old was arrested on suspicion of murder nearby in Clapham and remains in police custody.

The latest knife horror in the capital happened less than 48 hours after 16-year-old Alex Smith was stabbed to death in Camden, north London. There’s no suggestion that the two killings are linked.

Police and forensics officers on the scene at Corrance Road, Brixton, south London, where an 18-year-old man was stabbed to death 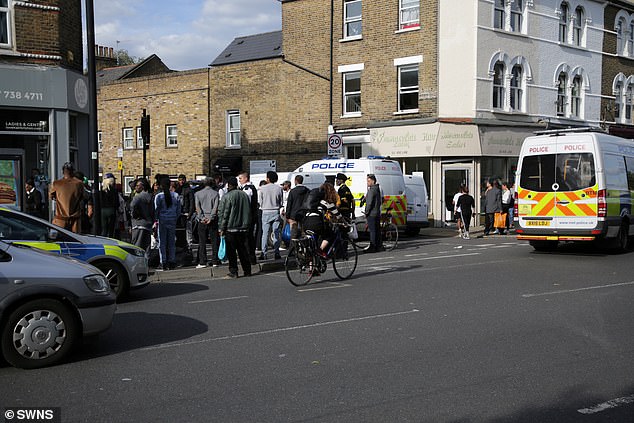 The latest victim is the sixteenth teenager to have been murdered in London this year, 15 of whom have been fatally stabbed.

The latest investigation is the 91st murder probe to be launched in the capital this year.

Police are appealing for witnesses.

A Scotland Yard spokesman said: ‘A murder investigation has been launched after an 18-year-old man was found with fatal stab injuries.

‘Police were called to Corrance Road, Brixton, shortly before 2pm on Wednesday to reports of a stabbing. Officers attended along with paramedics. 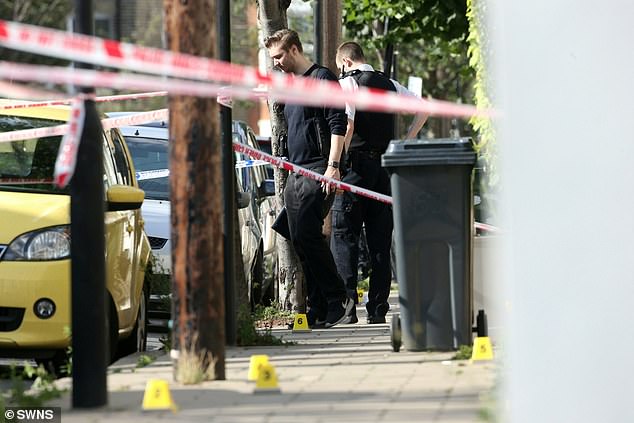 Officers have cordoned off the road in Brixton where an 18-year-old man was murdered. A 17-year-old was arrested in nearby Clapham

‘An 18-year-old man was found with stab injuries. Despite the efforts of paramedics, he was pronounced dead at 2.41pm.

‘A 17-year-old boy was arrested on suspicion of murder at 2.23pm in Tremadoc Road. He has been taken into custody. Crime scenes have been put in place.. Next of kin have been informed.’

He added: ‘A post mortem will be carried out in due course. Homicide detectives form Specialist Crime have been informed. Enquiries continue.

‘Any witnesses or anyone with any information is asked to call police.’