Teen in Slenderman stabbing had ‘a broken mind’

The lawyer for a 15-year-old girl who stabbed her friend when they were 12 to please a fictional character called Slenderman told a court that she was being controlled by a ‘broken mind’ on Monday.

Anissa Weier attacked Payton Leutner along with Morgan Geyser at a park in Waukesha, Wisconsin, in 2014.

They stabbed her 19 times, later claiming they’d done so to avoid the wrath of the character who they thought would come after their families.

Miraculously, Payton survived after crawling to a road where she flagged down a passing cyclist.

Anissa Weier, 15, (above on Monday) is one of two teenage girls who stabbed their 12-year-old friend in 2014. She is pictured at her mental competency trial in Madison, Wisconsin

Anissa and Morgan were both charged with first degree intentional murder and are being tried as adults.

Anissa has since pleaded guilty to the lesser charge of attempted second degree murder, entering a guilty by way of insanity plea.

The ongoing trial is to assess her mental competency and will determine whether she should be sentenced to a prison sentence or if she will be sent to a psychiatric facility.

If she is convicted, she could spend 10 years or more in behind bars.

Geyser has pleaded not guilty to being a party to attempted first degree murder. Her trial will begin in October.

On Monday, Anissa’s lawyer said she should not be sent to prison because she was not in control of her mind when she attacked Payton.

‘Anissa’s broken mind caused her to lose touch with reality. Anissa was under the command and control of a delusional disorder,’ attorney Joseph Smith said. 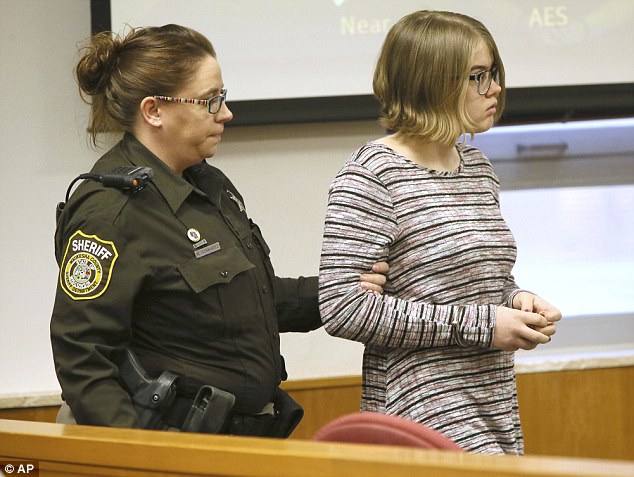 Morgan Geyser (above in November last year) also admits her role in the stabbing but has pleaded not guilty to attempted murder by way of insanity. Her mental competency trial will begin in October 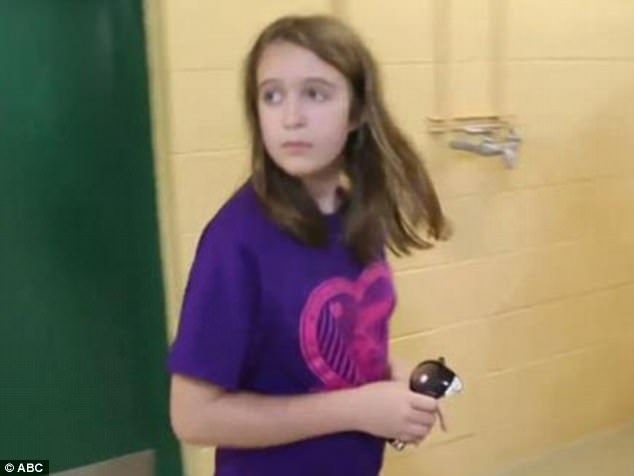 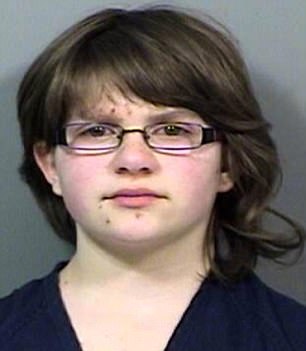 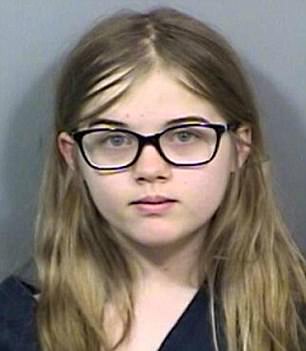 Weier and Geyser are seen above in their mugshots in April 2014. They were both 12 at the time

Geyser’s attorneys say she was suffering from a similar disorder which prevents sufferers from distinguishing between reality and fantasy.

After the stabbing in 2014, the pair both told police about Slenderman and described their fear that they would have been punished by him had they not attacked Payton.

They signed confessions to that effect which their parents and attorneys are now begging to be thrown out on the basis that neither understood properly what they were confessing to at the time.

On Monday, prosecutors rejected the argument and told jurors both girls were aware of what they were doing when they turned on Payton in the forest.

‘They knew this was wrong. They understood what they were doing was wrong,’ attorney Kevin Osborne said.

Anissa’s parents  previously appeared on Good Morning America to speak of their shock after learning what she had done.

They said they were unaware of her obsession with the sinister fictional character beforehand and revealed that their daughter was ‘absolutely’ remorseful over the attack. 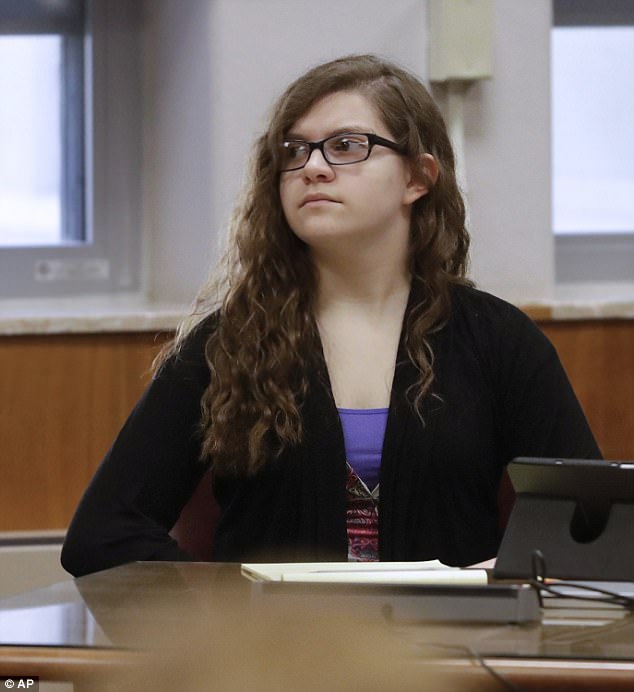 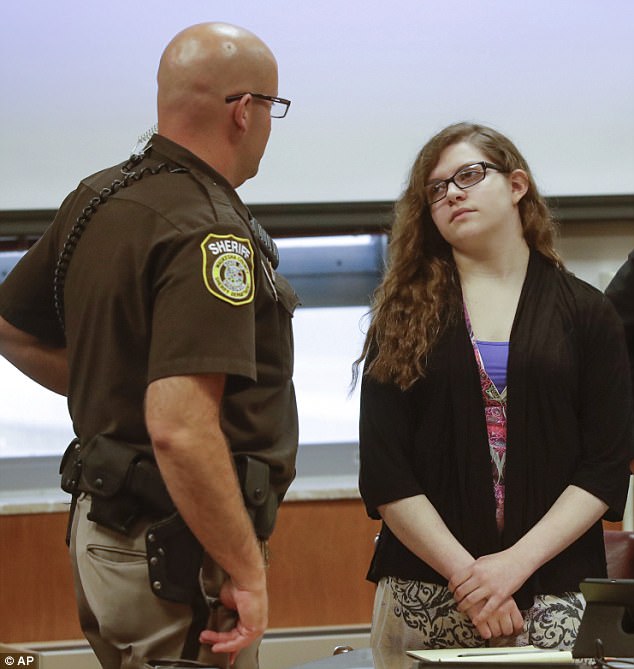 The trial will determine whether Anissa, 15, goes to prison or to a psychiatric facility 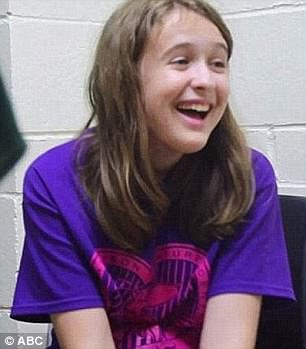 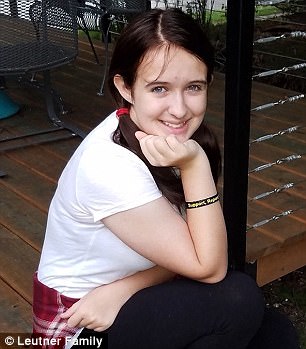 Payton survived by crawling into the path of a passing cyclist who called for help. She is pictured (right) this year

‘They thoroughly believed that Slenderman was real and they wanted to prove that he was real,’ Kristi, her mother, said.

The three girls had spent the night at Geyser’s home the night before the attack. Geyser and Weier plotted it overnight and Geyser carried the knife in her waistband as they marched in to the forest.

During police questioning, Weier said of the moment she saw the weapon: ‘Dear God, this is really happening.’

Their plan had been for Weier to carry out the attack but she froze and instead told her friend to do it instead.

After stabbing her 19 times, the pair ran away, leaving Payton for dead.

She was able to crawl far enough towards the path of a cyclist and flagged them down.

The girl was then taken to hospital where doctors said she was a ‘millimeter from death’. She returned to school in the fall of 2014.

WHO IS SLENDER MAN? THE ONLINE MYTH ‘THE GIRLS BELIEVED’ 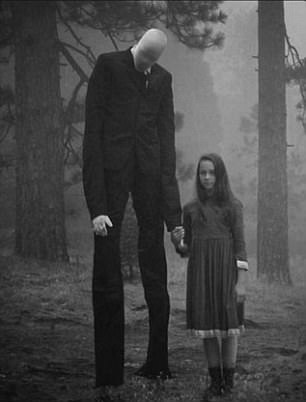 The Slender Man is a fictional character that originated in an online art contest in 2009, before becoming a popular meme.

The mythical creature is often depicted as an unnaturally tall, thin figure with a blank, featureless face, wearing a black suit.

The character is said to have creepily long, tentacle-like arms, which can be extended to capture prey.

It is described as stalking, abducting and traumatizing children, and – depending on variations of the urban legend – can cause memory loss, insomnia and paranoia.

It is also said to be able to create distortions in photographs and teleport.

The character is understood to have originated in a Photoshop contest on the forums of comedy website Something Awful in 2009.

It then went viral, with numerous works of fan art and short scary stories – known as ‘creepypasta’ – published online.

The character has developed its own life online, with two feature-length films funded in part by Kickstarter appearing in 2012, along with many amateur video games and pop-culture references.