A teenager has revealed how she was sectioned and almost died because of an addiction to exercise.

Lisa Fouweather, 19, from Doncaster, South Yorkshire, was so addicted to working out she ran half marathons before breakfast and hid in the toilet to jog on the spot.

She initially hoped to improve her running personal bests and excel at her running club but quickly became obsessed.

Soon she was sneaking off for runs before school, racking up 40 miles a week, on top of daily two hour ab workouts and 70,000 steps.

Lisa Fouweather, 19, from Doncaster, South Yorkshire, has revealed how she was sectioned and almost died because of an addiction to exercise. Pictured, out running a few days before she was sectioned

Lisa was so addicted to working out she ran half marathons before breakfast and hid in the toilet to jog on the spot. Pictured, before her year 11 prom with mum Joanna Fairweather 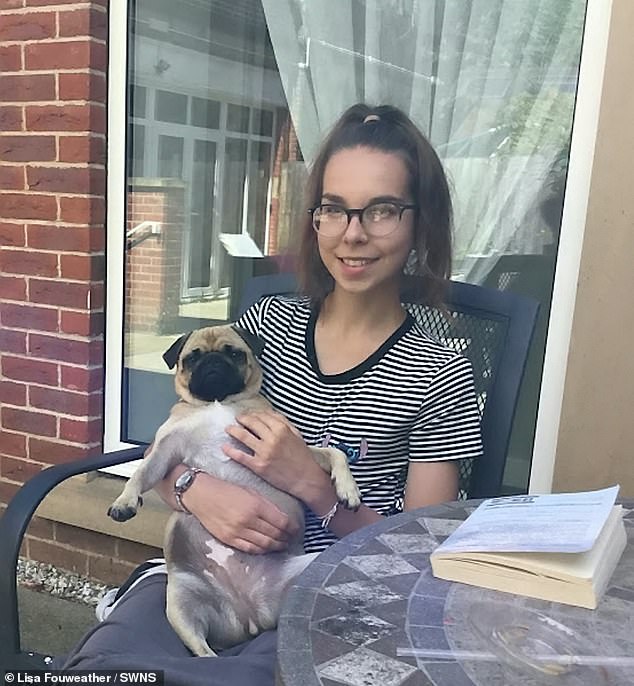 The 19-year-old initially hoped to improve her running personal bests and excel at her running club but quickly became obsessed. Pictured, in hospital during a visit by her parents

She was barely eating and would try to emulate – or beat – the training regimes posted on Instagram by professional athletes twice her age.

Her weight plummeted to just 5st 13lb – but Lisa told her loved ones she’d kill herself if they stopped her from exercising.

Brave Lisa was sectioned and initially refused to admit she had a problem, and her heart rate repeatedly dropped to 28bpm – putting her at real risk of death.

But thanks to hard work and professional help, she managed to put a stop to her extreme exercise and dieting – and is now a healthy weight, and doesn’t run.

She’s speaking out about orthorexia – an eating disorder where the sufferer is unhealthily obsessed with eating and exercise – to help others.

Lisa said: ‘I was running every day for miles and miles, despite feeling so so tired, both mentally and physically.

Lisa would barely eat and would try to emulate – or beat – the training regimes posted on Instagram by professional athletes twice her age. Pictured left, Lisa on her 16th birthday and right, on home leave from Riverdale hospital with mum Joanna 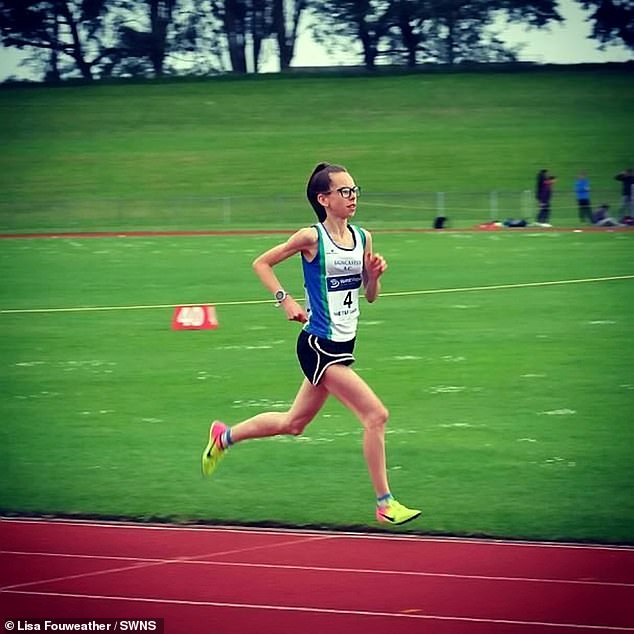 Lisa would sneak off for runs before school, rack up 40 miles a week, on top of daily two hour ab workouts and 70,000 steps. Pictured, Lisa running 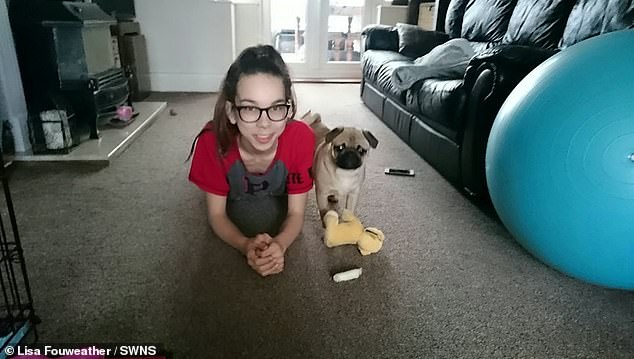 Lisa’s weight plummeted to just 5st 13lb – but she told her loved ones she’d kill herself if they her from exercising. Pictured, Lisa during the time she was addicted to exercising

‘I can remember one night doing a warmup at my athletics track and just crying as I was running.

‘Looking back, I think that was my body pleading with me to let it rest, but I never did.’

Orthorexia refers to an unhealthy obsession with eating ‘pure’ food. Food considered ‘pure’ or ‘impure’ can vary from person to person.

This doesn’t mean that anyone who subscribes to a healthy eating plan or diet is suffering from orthorexia.

As with other eating disorders, the eating behaviour involved – ‘healthy’ or ‘clean’ eating in this case – is used to cope with negative thoughts and feelings, or to feel in control.

Someone using food in this way might feel extremely anxious or guilty if they eat food they feel is unhealthy.

It can also cause physical problems, because someone’s beliefs about what is healthy may lead to them cutting out essential nutrients or whole food groups.

All eating disorders are serious mental illnesses, and should be treated as quickly as possible to give the sufferer the best chance of fully recovering.

Lisa’s trigger to her orthorexia was taking up competitive running and joining Doncaster Athletics Club in September 2016 where she ‘never felt good enough’.

She attended every session and practice but still found herself coming last in races, so decided to change her diet.

The teen’s meals would comprise of a few pieces of food from her ‘safe foods’ list which was mainly fruit and vegetables.

She would avoid her ‘fear foods’ which was anything containing sugar or fat like white bread and potatoes, and even included drinks.

‘I was scared of consuming “liquid calories” and I would throw my orange juice out of the window when my parents left the room,’ she said.

This helped in the short-term, placing in the top 50 UK runners for the 3,000m track event and achieving a sub-20 minute 5k.

‘My running finally felt as though it was starting to come together, when in fact, my whole life was falling apart,’ she explained.

It affected her education as she would turn up late to school every day as she’d wait for her parents to leave for work before going for a run.

She said: ‘Six mile runs became half marathons, all ran on an empty stomach before breakfast.

‘Upon my return I would eat only fruit; seven strawberries, or if I was feeling particularly hungry that day, I might stretch to a banana.’

At the end of the school day she would leave as soon as possible, getting off the bus a few stops early so she could walk home and to do a two-hour ab workout.

She said: ‘Following lots of professional athletes on Instagram, I would obsessively look up to what they were eating and how many miles they were running. 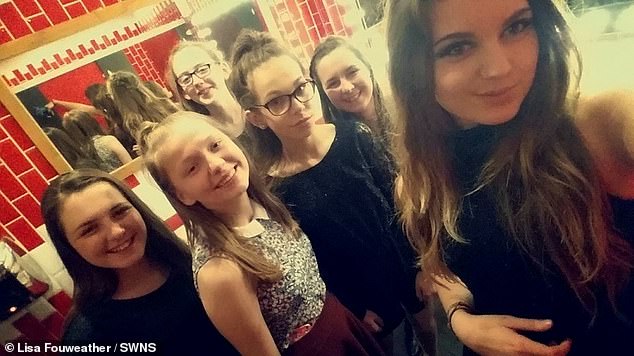 Lisa’s trigger to her orthorexia was taking up competitive running and joining Doncaster Athletics Club in September 2016 where she ‘never felt good enough’. Pictured, at a friend’s birthday meal at Pizza Hut where she just ate salad

‘Even though they were at least a decade older than me, I wanted to do at least what they were doing, if not more.’

Her parents, Joanna and Roy Fouweather, 45 and 57, started noticing something was wrong at the start of 2017, and took her to the hospital.

She was referred to the Children and Adolescents Mental Health Services (CAHMS) for the next day where she was diagnosed with orthorexia and banned from exercise.

But Lisa couldn’t stop, and threatened to her parents that she would commit suicide if they stopped her from running.

She said: ‘CAMHS were threatening to get social services involved if I continued going, because they said I was at risk of having a heart attack, or worse.

‘I didn’t think my life was worth or even capable of living if I couldn’t run.’

On a holiday in Turkey in September 2017, Lisa and her mum, dad and sister, Shannon Raine, 24, went on a boat trip for the day where her parents had booked luxury sunbeds for them all to relax on.

Lisa said: ‘I found this unbearable. I couldn’t lay down all day, I had to be exercising. I’d go to the toilet every 10 minutes and jog on the spot, counting to 500 whilst I did so.’

At the age of 16, Lisa was sectioned and taken to Doncaster Royal Infirmary by ambulance where she spent three weeks getting her weight back up.

She said: ‘I was in denial for a very long time. I told everyone, including myself, that I was just eating in this way and exercising so much because I ‘took my running seriously.’ 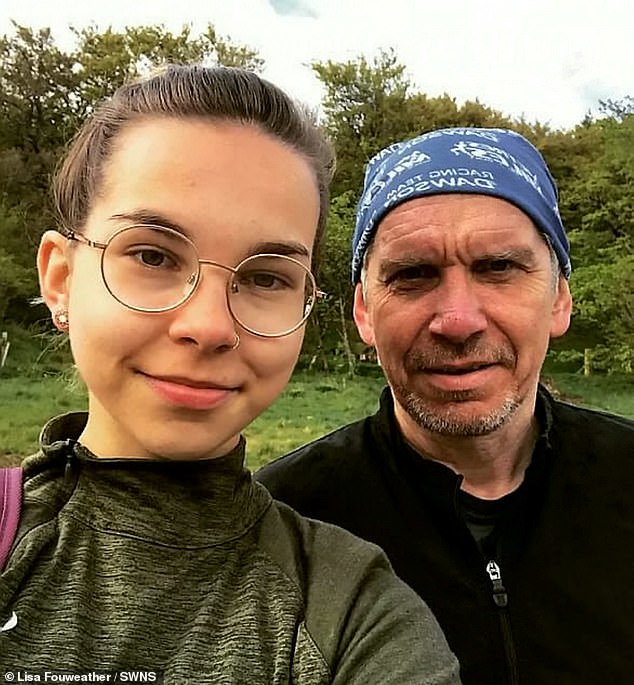 Lisa has been in recovery for nearly three years since but still has never had a menstrual cycle, and has to be careful not to exert herself due to her low bone density. Pictured, with her dad Roy in the Peak District

‘I would think that my parents, CAMHS and my GP all wanted me to stop running because of problems they had.

‘I thought that me exercising made them feel guilty because of their lack of exercise.’

The Sheffield Hallam student was on strict bedrest, had to be pushed in a wheelchair to go to the toilet and was threatened to be tube fed.

At one point, her heart rate dropped to 28 beats per minute.

‘I was told that I could’ve died at these times, because my heart was struggling to cope,’ she explained.

She was transferred to a specialist eating disorders clinic called Riverdale Grange in Sheffield where she spent seven months in ‘chair rest’ and attending therapy sessions.

When she finally left, she weighed 54kg. She has been in recovery for nearly three years since but still has never had a menstrual cycle, and has to be careful not to exert herself due to her low bone density.

Lisa said: ‘I want people who are going through or who might know someone who is going through an eating disorder to know that there is help and support out there, and you don’t have to wait until you’re at breaking point to seek that help.’

If you are facing any similar issues to Lisa call BEAT on 0808 801 0677 or go to www.beateatingdisorders.org.uk for support.