Teenage boy, 17, is stabbed to death in east London – as murder toll in capital rises above 100

Teenage boy, 17, is stabbed to death in east London – as murder toll in capital rises above 100 for sixth year in a row

A 17-year-old boy was stabbed to death in east London last night – as the murder toll in the capital rises above 100 for sixth year in a row.

The teenager was found after police were called to Westbury Road, Walthamstow, at around 9.20pm on Friday night.

A 17-year-old boy was found suffering from a stab injury and was treated by paramedics at the scene.

A murder investigation has been launched after a 17-year-old boy was stabbed to death in Walthamstow, east London on Friday night. Pictured: A police tent is set up in a front garden of a property on Westbury Road

Despite their best efforts, he was pronounced dead at the scene a short while later at 9:57pm.

Police have launched a murder investigation into the Walthamstow stabbing but there have been no arrests made.

Officers are working to establish the male’s identity and inform his next of kin.

The area is sealed off as a crime scene as officers from the Met Police investigate the incident.

A police tent has been set up in a front garden of a property on Westbury Road in Walthamstow where houses are worth more than £500,000. 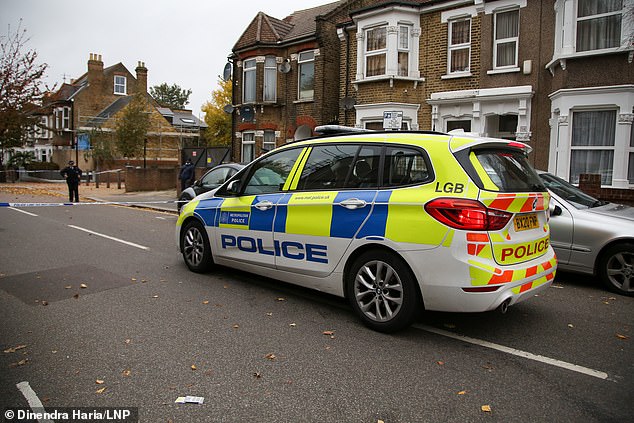 The teenager was found suffering from a stab injury after police were called to the scene on Westbury Road at around 9.20pm but he was pronounced dead a short while later at 9:57pm

A video of the scene last night was posted on social media that shows the area taped off and two police cars parked on the road with flashing lights.

Police initially said they believed the victim was 22, then believed he was aged 19, but now believe he was a 17-year-old.

The brutal stabbing comes after it was recently announced that more than 100 people have been killed in London so far this year.

This is the sixth consecutive year that the homicide toll in the capital has reached over 100 –  despite the city being in lockdown for most of 2020.

The horrifying death toll includes 12 teenagers and six children aged ten and under.