Teenage Extinction Rebellion protester, 17, who climbed crane says he is ‘cold but in good health’

A teenage Extinction Rebellion protester who is camped on top of a crane in Norwich says he is ‘cold but in good health’ 24 hours after climbing the structure.

Giving an update after a night spent up the crane the teenage protestor said this morning: ‘I’m still up here, a bit cold but still in good health for now.

‘Last night was cold and the condensation from the fog in the early hours managed to soak me, so that contributed to it.

‘I feel that it’s still necessary to be up here with these banners up to ensure that the message continues to circulate and until the Government take action.’

Alex Sidney (pictured) has vowed to stay put on a gantry outside the crane’s cab at 108 feet high, until he has ‘mild hypothermia’

He is camped on a gantry outside the crane’s cab, which the teenager said is around 33 metres high.

One of his banners that is hung from the crane features the Extinction Rebellion logo and a slogan reading ‘beyond f***ed’.

Mr Sidney said he has just over a litre of water and some hard sweets left with him and that he had ‘no idea’ how long he would stay up there.

He added: ‘I also have pasta but cannot boil it as my stove ran out of gas last night’.

Mr Sidney said one of the key issues he wants tackling locally is the Wensum Link, also known as the Norwich Western Link, a new dual carriageway in Norfolk – the construction of which he says is ‘destroying ancient trees, barbastelle bats, and polluting our protected chalk streams’. 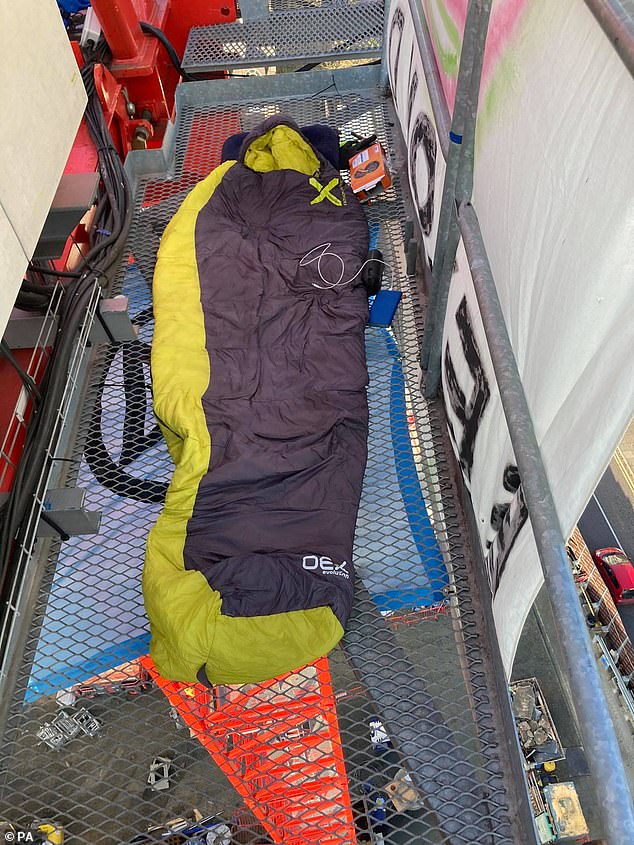 Alex’s crib for the night: The teenager has with him a sleeping bag, cushion, food, water, stove, basic tools and battery packs, along with his phone and a speaker for music 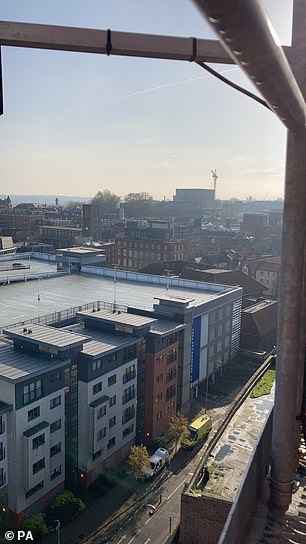 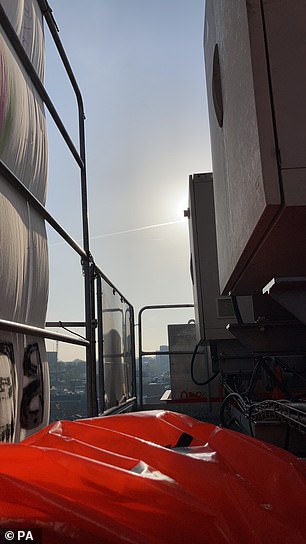 Photos taken by Mr Sidney from the top of the crane on Duke Street, Norwich, where he has been for 24 hours since climbing the structure on Saturday morning

‘We need our council to rethink this project and call it off,’ he added.

Norfolk Police were called to the scene just before 6.40am and have arrested three people in connection with the incident.

Officers remain in attendance and have asked members of the public to avoid the area.

Speaking about the police presence, Mr Sidney said: ‘They have refused to provide any food or water, and won’t be able to get me down – they’re just starving me until I am forced to come down.’ 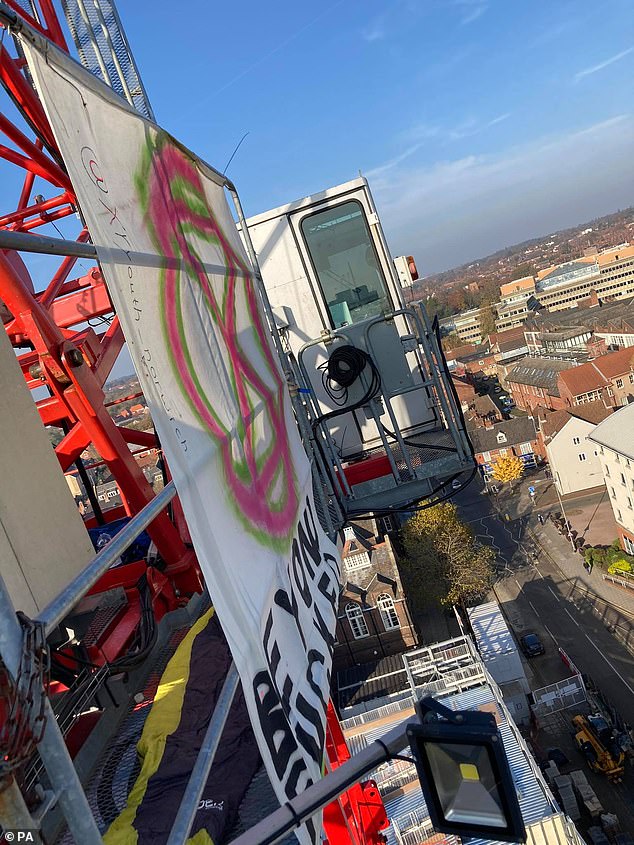 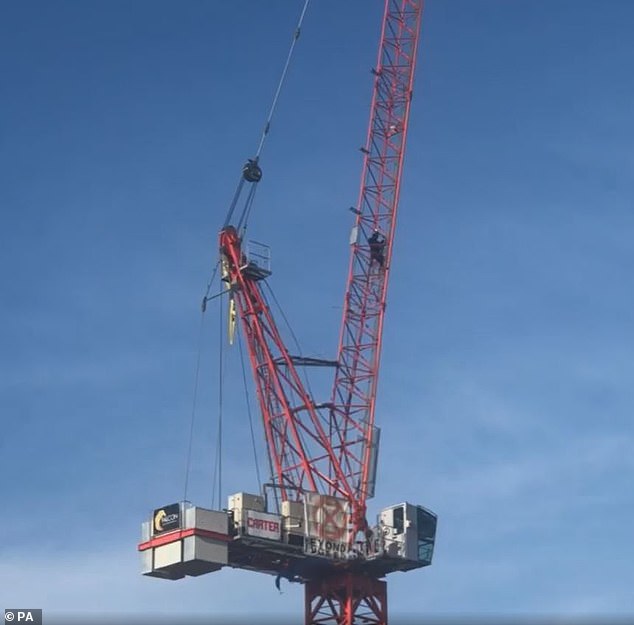 The Extinction Rebellion protestor said he will remain on a gantry outside the crane’s cab, for an ‘indefinite’ time. Pictured scaling the crane

Norfolk Constabulary have been contacted for an updated comment.

Mr Sidney said on Saturday that he has with him a sleeping bag, cushion, food, water, stove, basic tools and battery packs, along with his phone and a speaker for music.

Extinction Rebellion Norwich spokesman James Graham said the crane protest went ahead in place of a much larger demonstration which had to be postponed due to the national lockdown in England. 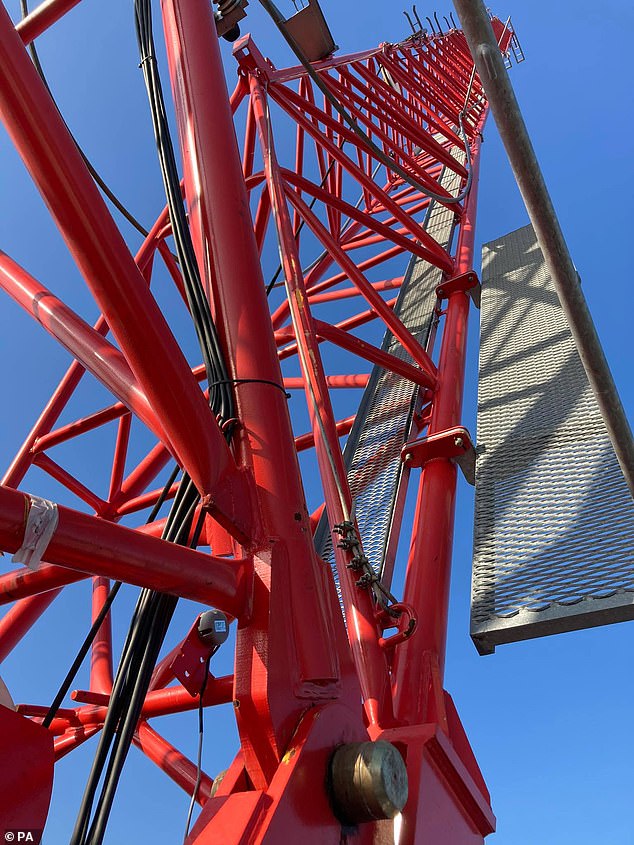 ‘The message, fundamentally, is that while we know Covid is an immediate problem, it does not trump the reality that our world is changing faster than the life on it, including us, can handle,’ Mr Graham said.

‘Yes, obviously working at height can be dangerous but in addition to the health and safety measures already in place on site to minimise the risk of accidents, Alex is a bright young man who is fully invested in his own safety.

‘None of us want to see anyone getting hurt and we risk assessment all our actions beforehand.’