A teenage father scooped an incredible lottery win on his first attempt while sitting in the bath.

Sam Lawton, who lives with his girlfriend Connie Bell, a HR worker, and their one-month-old son, won £120,000 in the National Lottery’s newest game, Set For Life.

The 19-year-old is now looking forward to spending the money on a holiday to New York, driving lessons and a deposit for a new home.

He revealed he was inspired to play after seeing Dean Weymes, 24, win a £3million prize.

Sam Lawton, with partner Connie, celebrating after scooping £10,000 a month for a year on the new National Lottery Set For Life game

Mr Lawton, who celebrated the win with his girlfriend Connie, 20, said: ‘I saw Dean Weymes celebrating his win and just thought I’d have a punt.

‘I downloaded the National Lottery app in the bath, put a tenner in my account and then played a Lucky Dip.’

At a press conference at Coombe Abbey hotel outside Coventry, Miss Bell added: ‘Our little boy is going to be spoiled rotten. We’ve always been unlucky in a sense.

‘When I learnt we were expecting it was amazing but then we were struck down as I got septicaemia whilst pregnant.

‘That was another stepping stone, we weren’t sure what the situation would be for our future – but things have worked out in the end. We are just very happy to have won.’

The teenager, who is yet to pass his driving test, went downstairs after his bath to learn he’d won the Set For Life second prize.

Mr Lawton added: ‘It was only an hour, maybe 90 minutes, after I first played when I saw a message on my phone and it said I’d won the second prize – £10k a month for 12 months.

‘He said ‘on my way, don’t move’ and within five minutes he was at my front door.

‘We checked the tickets and sat there in disbelief wondering if it was true. It was a sleepless night and then I got up and went to work as usual at 8am.’ 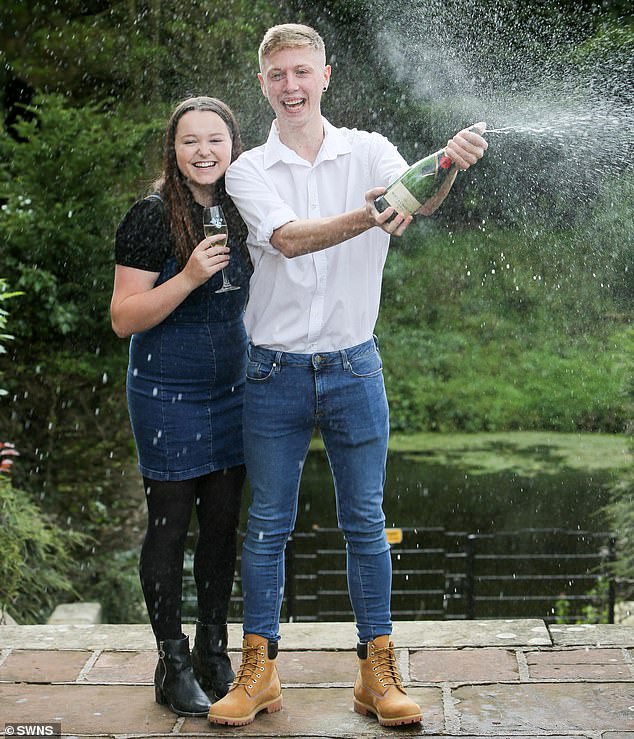 The father-of-one data analyst, from Leamington Spa, won after matching five numbers in the one in 1,704,377 game

He added: I can’t actually believe that I’m going to be able to do these things – and do them right now.

‘Everything still seems quite unreal – the news really is still sinking in.

‘The next thing on my list is a driving licence. I haven’t passed my test and with a small family I need wheels, maybe a BMW 1 series.

‘The win will allow me to learn to drive and get a car straight away – which is amazing.’

He said: ‘It is so surreal because a few of us had only been talking about Set For Life the week before, and what we would do it we won, and there I was – a winner.’

The graduate will enjoy £3.6m in instalments until he turns 54 after beating odds of one in 15.3million.