Sickening moment teenage girls throw a 15-year-old to the ground, punch her in the face 30 times and kick her in the head, then stomp on her when she refuses to hand over her phone password

A 15-year-old girl has been viciously bashed after refusing to hand over her mobile phone to a group of teenage girls.

Violent footage of a brawl at an Eastern Beach playground in Geelong was uploaded to social media showing the teenage girl being seriously hurt by her attackers.

A girl is seen approaching the victim from behind before throwing her to the ground where she is punched up to 30 times and kicked in the face.

Other teens joined in, stomping on the girl’s head as she lay on the ground helpless.

Victoria Police allege a number of girls approached the 15-year-old victim on Saturday evening demanding she hand over her mobile phone.

After the violent attack the girl gang allegedly took off with her mobile phone.

The victim was later taken to hospital with non-life-threatening injuries.

Geelong police crime investigation unit detectives later charged a teenage girl for her alleged role in the brawl on Wednesday.

The 17-year-old girl was charged with affray, robbery, assault with intent to rob, assault in company, assault by kicking and committing a crime while on bail. 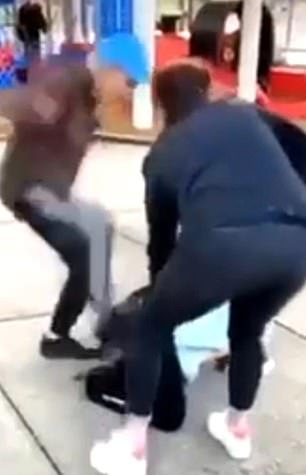 A teenage girl has been assaulted by a group of girls in Geelong, Melbourne, after refusing to hand over her mobile phone on Saturday

She was remanded to appear before a children’s court at a later date.

Two other teens, a 17-year-old and a 16-year-old were were arrested on Tuesday and charged with robbery and assault.

Both girls were bailed to appear before a children’s court at a later date.

Police are treating the investigation as ongoing and urged anyone with information to contact them.