A teenage Argentine girl has told of how she was gang raped by at least 10 men at a house party while her supposed ‘friend’ laughed.

The 17-year-old said in a social media video that she was speaking out about her ordeal ‘to avoid what happened to me’.

‘We were drinking there very calmly,’ the girl explains in the short 40-second clip.

‘Then more guys started to show up. They were grabbing me, pushing me. They left me with bruises and they hurt me down there.’

At least ten men are being investigated for gang raping a 17-year-old girl, who bravely spoke out about her ordeal in a video posted on social media (pictured) in order to help others

She also says that nobody did anything to help, adding: ‘My so-called friend saw me there, lying on the bed naked. She looked at me, laughed and went away.’

‘And then when my friend left, they kept raping me and other guys came in too. One after the other they kept on.’

According to local media, at least 10 men are being investigated for taking turns to rape the victim – whose name has not been disclosed as she is under the age of consent, which is 18 in Argentina.

The incident allegedly took place at a house party in the city of Florencio Varela in the eastern Argentine province of Buenos Aires, where alcohol and cannabis were consumed.

The teenage victim believes that she was drugged by someone before the alleged gang rape.

One suspect took the girl up to a bedroom where at least nine others joined him, judicial sources told local media.

After the ordeal, the 17-year-old alleges that she was almost unconscious in the bedroom when the male house owner raped her before asking her to take a shower and leave.

When she left the house, she bumped into a former boyfriend who convinced her to report the case to the police. 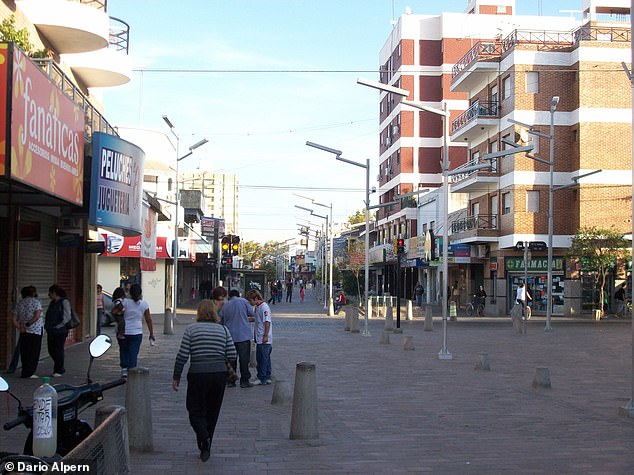 The alleged incident took place at a house party in Florencio Varela (pictured), a city in Buenos Aires Province, Argentina

Reports said that the teenager approached an officer who accompanied her back to the station to file a complaint.

According to judicial sources, the victim managed to identify the suspects involved in the alleged gang rape. A medical examination also proved that she had suffered signs of sexual abuse.

The police have now charged nine suspects with sexual abuse, including a 14-year-old boy who is under the supervision of a juvenile court, according to local media.

A 21-year-old man has been also charged, but his current whereabouts are unknown and an international arrest warrant has been issued.