A teenager who had suffered with agonising periods for five years was shocked when doctors had to remove a 15cm cyst.

Rebecca Woodthorpe, 18, had to have her ovary removed because she said the mass twisted around and ‘killed’ the organ.

The A-level student had experienced sharp ‘stabbing’ pains in her stomach and legs every month since the age of 12.

Miss Woodthorpe claims doctors reassured her the pains were ‘probably nothing’ until her persistence led to an ultrasound.

Doctors eventually discovered a benign 11cm mass – which was 15cm by the time it was removed.

Rebecca Woodthorpe, 18, pictured with her parents, Anne and Paul, both 42, had suffered with agonising periods for five years was shocked when doctors discover a football-sized cyst 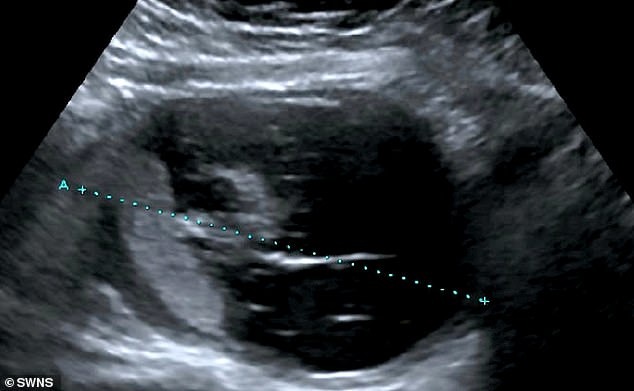 With an ultrasound, doctors eventually discovered a benign 11cm mass – which was 15cm by the time it was removed 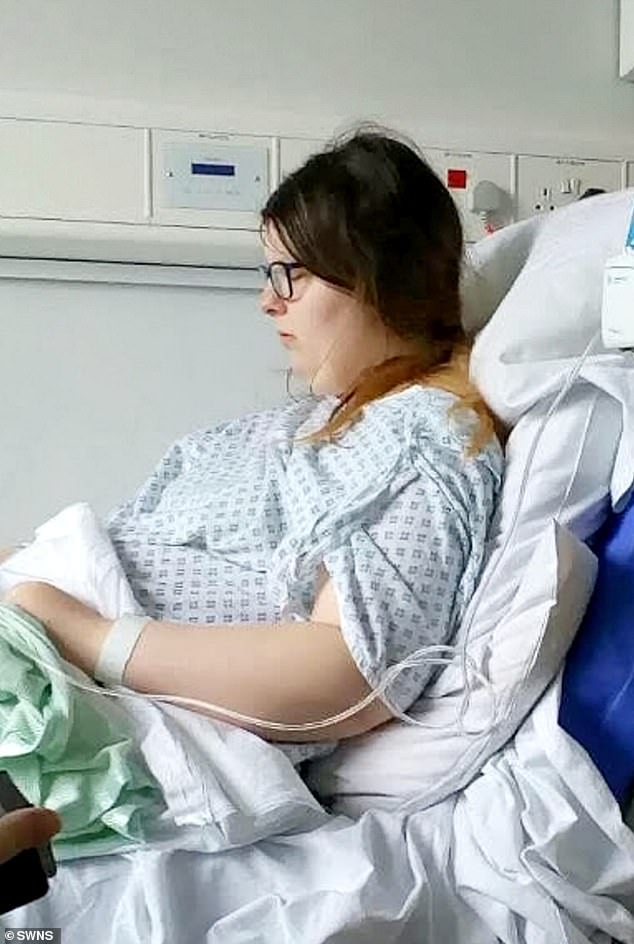 Miss Woodthorpe had the cyst and an ovary removed in February 2018 because the cyst had twisted round the ovary, turned it black and ‘killed it’

Miss Woodthorpe, from Lincoln, said at 12-years-old doctors said she had ‘period pain’ and put her on the pill.

She said: ‘I was experiencing kidney pain in my left side, strong left thigh pain, abdominal and period pain and at each time of the month I would get a sharp stabbing that would last seconds but was horrific.’

Aged 14, in 2015, she went back to the doctors because the pain was getting much worse, but claims she was told it was ‘probably nothing’.

The pain stepped up again, and she had an ultrasound on her kidney in November 2017, which revealed the cyst.

It is not clear how long the cyst had been there.

Most ovarian cysts are harmless and go away on their own but it may need to be removed if it is causing pain or could be cancerous.

Miss Woodthorpe said: ‘At the scan I went in alone and the radiologist just happened to scan over my ovary before looking at the kidney and saw the cyst.

‘The lady told me it would need further action and I really panicked as hospitals make me nervous.

‘I left the room and told my parents. They were both shocked.’

The cyst was originally 11cm, but by the time Miss Woodthorpe was operated on – three months later – it was 15cm.

She had a unilateral salpingo-ophorectomy – when only one ovary and fallopian tube are removed – in February 2018. 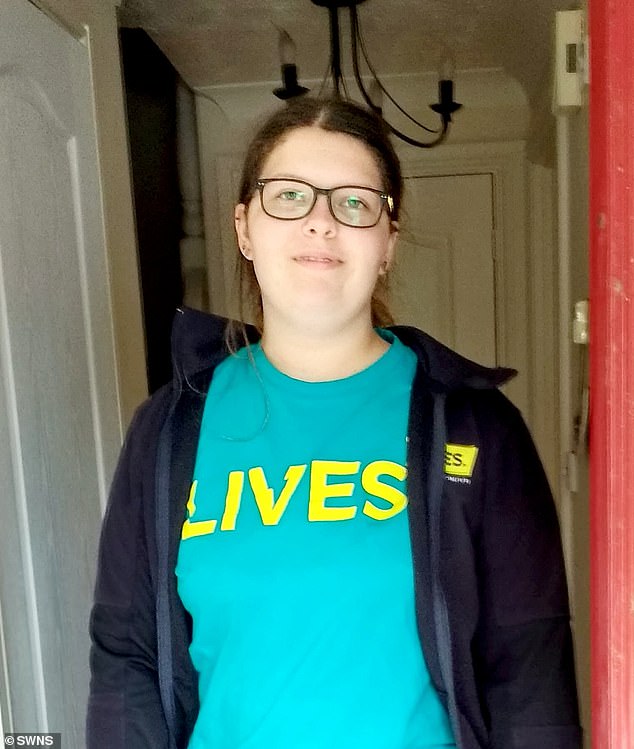 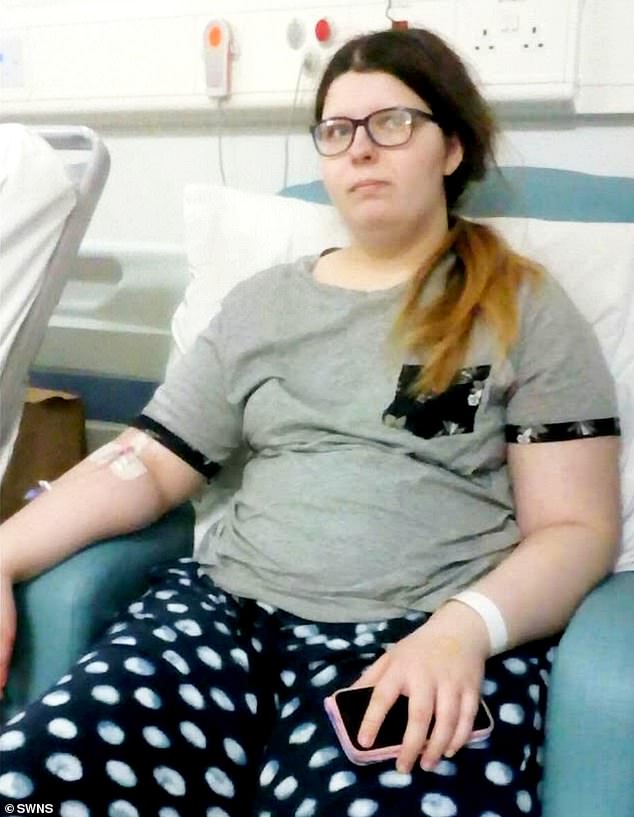 Miss Woodthorpe had the cyst and an ovary removed and had to leave her A-level studies while recovering for several months. Pictured, in hospital 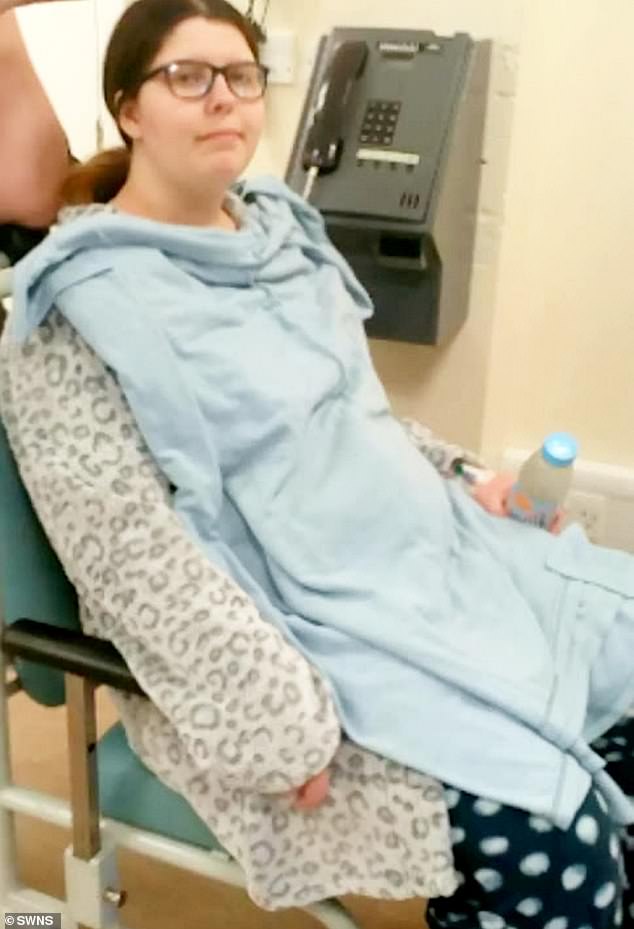 Miss Woodthorpe was in surgery for two-and-a-half-hours and in recovery for one hour. But she remained in hospital (pictured) due to complications

She said: ‘The tumour had actually twisted twice around my ovary, killing it, so the ovary was black and all had to be removed.’

Large cysts can cause the ovary to move out of position or twist, which can decrease the blood flow, according to the Mayo Clinic.

However there is no suggestion that the cyst itself can twist around the ovary.

‘I was in so much pain, it was a relief to have my ovary and the cyst removed.

‘I was under for two-and-a-half hours and in recovery for one hour. My parents waited outside recovery in the corridor the whole time.’

Miss Woodthorpe was in hospital for a further four days, due to complications. She said her wasn’t able to urinate and her stomach expanded and became hard.

‘After examining it they thankfully said it was benign.’

‘I did worry about the possibility of having children in the future, but I still have one ovary so I hope I’ll be able to become a mum one day.’

It took Miss Woodthorpe several months to recover from the procedure, and she had to leave school during her A-levels.

She said: ‘Still to this day I’m trying to build up to where I was years ago. 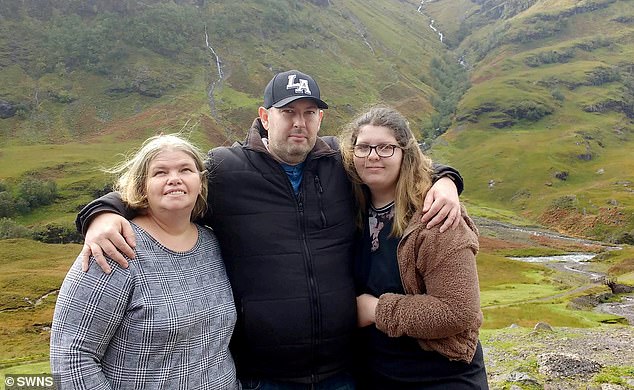 Miss Woodthorpe said her parents, pictured, have been there to support her 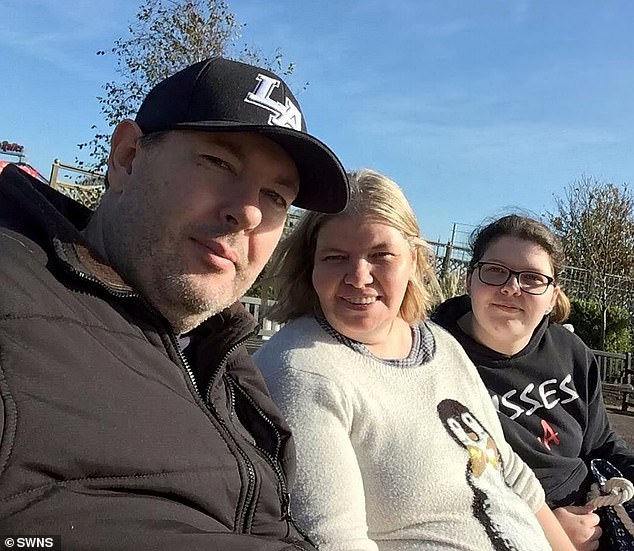 ‘Also ever since the operation my hair had fallen out in clumps due to the anaesthetic, I’m told.

‘I’ve now started studying again with open study college online so I can take it easy.’

Miss Woodthorpe is grateful that her parents, Anne and Paul, both 42, have been there to support her.

She said: ‘They have helped and supported me through everything and it was hard on them too.

‘They stayed with me every day all day and looked after me before and after.

‘They really deserve a medal.’

WHAT IS AN OVARIAN CYST?

An ovarian cyst is a fluid-filled sac that develops on a woman’s ovary. They’re very common and don’t usually cause any symptoms.

Most ovarian cysts occur naturally and disappear in a few months without needing any treatment.

An ovarian cyst usually only causes symptoms if it splits, is very large, or blocks the blood supply to the ovaries.

Ovarian cysts can sometimes also be caused by an underlying condition, such as endometriosis.

The vast majority of ovarian cysts are non-cancerous (benign), although a small number are cancerous (malignant). Cancerous cysts are more common in women who have been through the menopause.

Surgical treatment to remove the cysts may be needed if they’re large, causing symptoms, or potentially cancerous.

In some cases, surgery to remove both your ovaries may be necessary, in which case you’ll no longer produce any eggs.