A teenage girl who was illegally strip-searched at the Splendour In The Grass music festival said she never received the apology police claimed to have given her.

The girl, 16 years old at the time, was told to undress and squat after a sniffer dog sat next to her – taken as an indicator of drug possession – at the popular festival in Byron Bay, New South Wales in July 2018. No parent was present during the search.

The teenager – who is now 18 and cannot be named for legal reasons – told the inquiry when she realised she was about to be strip searched she ‘could not stop crying’ and was ‘completely humiliated’.

The case was one of five that the Law Enforcement Conduct Commission announced their findings about on May 8.

The report stated New South Wales Police apologised to her – however the teenager said she never received an apology.

The woman, now 18, was told to undress and squat after a sniffer dog sat next to her at the festival in Byron Bay. No parent was present during this search (stock)

‘They have definitely not sent me an apology,’ she told the Sydney Morning Herald.

‘It just feels like they don’t understand how much it affects people going through this.’

She said the first she’d heard of the apology was when someone from the LECC contacted her a day before the findings were released to ask if she had received it.

‘When I heard how many laws they broke it was just so shocking that they didn’t do pretty much anything right, and as a 16-year-old you don’t know what sort of process you should be going through or what your rights are,’ she said.

However the New South Wales Police Force are adamant an apology was issued to the teenager.

‘The NSWPF notes the findings of Operation Brugge and is considering all recommendations and findings made by LECC,’ a spokeswoman told Daily Mail Australia.

‘Northern Region Commander, Assistant Commissioner Max Mitchell, wrote to the 16-year-old teenager referred to as ‘BRC’ in the report in April 2020.

‘The NSWPF has also made significant improvements to its procedures since Splendour in the Grass in July 2018.

‘This includes, but is not limited to, improved guidance to police officers on the importance of having support persons present in all strip searches involving young persons.’

The LECC recommended that officers get better training on how to conduct strip searches, and when they should be done. 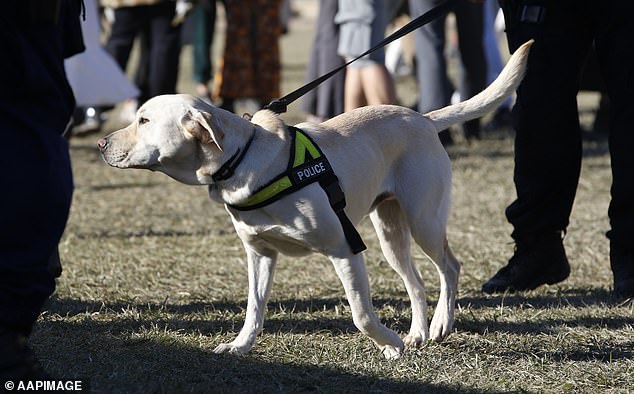 The report stated New South Wales Police Force issued an apology to the woman, who can’t be named for legal reasons, but she said she never received one (stock)