Teenagers charged over alleged hit and run that left a man dead in Wynnum West, Brisbane

Teenage boy, 15, and girl, 16, are arrested after allegedly ‘stealing an SUV and crashing into a Vespa rider – killing him’

A man is dead and a group of teenagers are facing serious charges after an allegedly stolen car crashed into a motor scooter.

The 59-year-old was rushed to hospital following the crash at Wynnum West, in Brisbane’s east, about 9.20am on Monday but died later that night.

Police will allege a group of teenagers, aged between 15 and 16, travelling in two vehicles fled the scene.

Officers allege the Nissan X Trail that smashed into the scooter was stolen from a nearby home the morning of the crash.

It was found at the site and has been seized.

A man has died after his scooter was struck by an allegedly stolen Nissan X Trail in Wynnum West, in Brisbane’s east on Monday morning

The four accused were found at a nearby address shortly after and taken into custody.

A second car, also allegedly stolen, was located close by.

Police said the motorcyclist was heading home from a social event on Monday morning when the Nissan allegedly swerved onto the wrong side of the road and collided with the scooter.

Inspector Lindsay Kilpatrick said it was a ‘tragic’ event and both the Nissan and the scooter were left severely damaged.

‘It’s both disappointing and frightening, it’s a tragic event for the male rider, his family, the local community, the witnesses, emergency services that have to come to these events,’ he said on Monday. 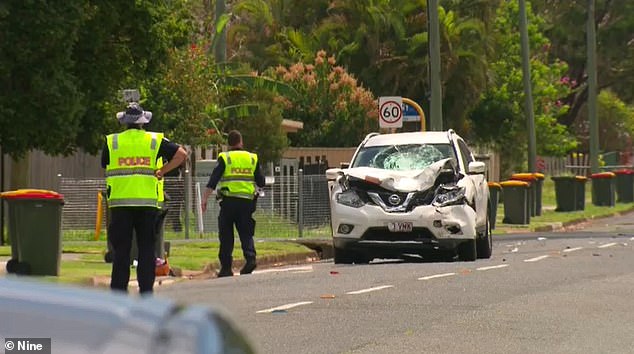 Police said the motorcyclist was heading home from a social event on Monday morning when the Nissan allegedly swerved onto the wrong side of the road, colliding with the motorcyclist

‘But the detectives are investigating and they will get to the bottom of what happened.’

A neighbour said she heard the collision from her backyard.

‘The man was in very bad shape, one of his legs was completely twisted, it didn’t look good. Everyone was just shocked, one lady must’ve been a nurse and just went into full nurse mode and tried to help the man,’ Skye Aminita told the Courier Mail. 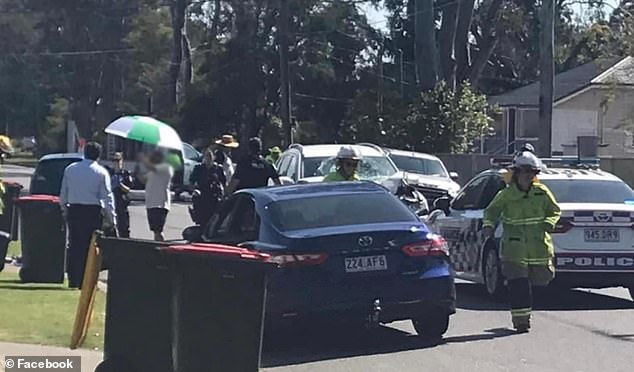 Emergency services are seen at the scene on Monday. Four teenagers have been charged

The alleged driver of the car involved in the crash is a 15-year-old boy who faces charges including dangerous driving causing death and failing to remain at the scene.

The alleged passenger, a 16-year-old girl, has been charged with dangerous driving causing death and unlawful use of motor vehicle.

They will appear before Brisbane Children’s Court.