Facebook has been dethroned and is no longer the social media platform of choice for users between the ages of 13-17, according to a new Pew Research Center survey.

The number of users in that age range using Facebook has dropped to 51 percent, compared to 71 percent in a 2014-2015 survey.

Instead, YouTube, Instagram and Snapchat are the top choice for teens, drawing 85 percent, 72 percent and 69 percent of respondents, respectively. It’s a dramatic increase from three years ago, when only about half of teens used Instagram and 41 percent said they used Snapchat.

Facebook had ruled the social media landscape among U.S. teenagers until recently, with YouTube, Instagram and Snapchat all coming in as more popular among people age 13-17

And they’re using the platforms everywhere: The study found that 95 percent of teenagers now own a smartphone or have access to one according to the study.

Despite making social media a huge part of their lives, teens have mixed feelings about whether that’s a good or bad thing. A plurality (45 percent) said social media usage had neither a positive or negative affect on their lives, while 31 reported the impact was mostly positive and 24 percent said it was mostly negative.

Lower-income teens were more likely to use Facebook than those from wealthier households, with about 70 percent of those living in a household making less than $30,000 a year reporting using Facebook. That’s compared to just 36 percent of teens who used the platform in households reporting income of $750,000 or more. 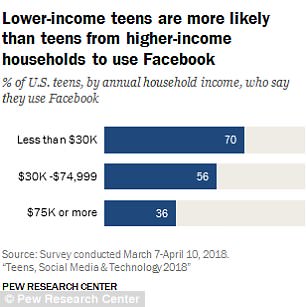 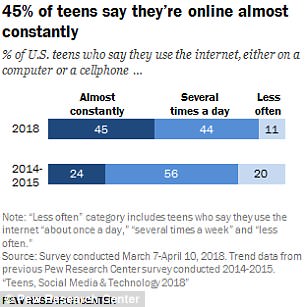 Lower income teens are much more likely to use Facebook than their wealthy peers. Usage of the internet has gone up among teenagers, with 45 percent reporting they use it ‘almost constantly,’ compared to just 24 percent three years ago

Usage of the internet has gone up overall among teenagers, with 45 percent reporting that they use it nearly constantly, compared to just 24 percent three years ago. Another 44 percent report going online several times a day, while 11 percent say they use it even less often than that.

Girls are more likely than boys to use Snapchat most often, with 42 percent reporting that as a first choice. Meanwhile, boys are more likely to login to YouTube most of the time, with 39 percent saying that it’s their go-to platform. 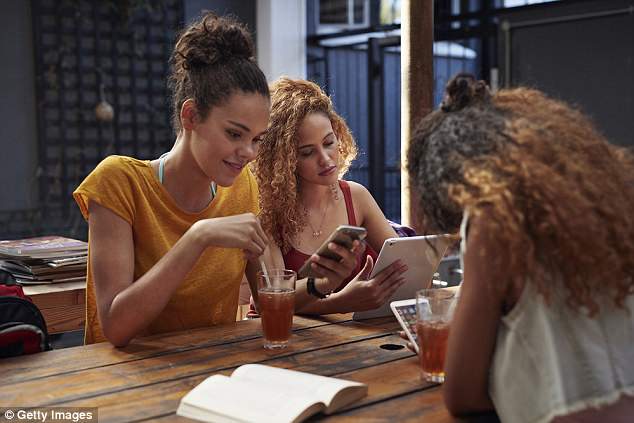 About 45 percent of teenagers said social media usage had neither a positive or negative affect on their lives, while 31 reported the impact was mostly positive and 24 percent said it was mostly negative