EXCLUSIVE: Horrifying Telstra voice-to-text blunder as man’s cheerful check-in on a mate is changed to ‘I’m going to kill myself’ – leading worried cops to swarm his family home

A landscaper was left ‘deeply shocked and embarrassed’ when police officers turned up at his home after a horrifying ‘stuff up’ caused by a voice-to-text message.

But when the message was converted to text it somehow got lost in translation – and the words ‘I want to kill myself’ were added.

A Sydney landscaper was left ‘deeply shocked and embarrassed’ when police officers turned up at his home after a horrifying ‘stuff up’ caused by a bizarre failure of Telstra’s voice-to-text message system. The actual SMS Rich received from his friend that prompted him to call the police

When Rich replied to the frightening message to ask if Timothy was ok, he got no response.

He then tried call but Timothy did not pick up.

Rich then called the police on the advice of friends, who quickly tracked Timothy’s number to his home, in Sydney’s Eastern Suburbs – and sent a car there.

Within an hour of Rich’s panicked call, three Sydney police officers were banging on the door of Timothy’s home.

His bemused wife led the three officers past their two teenage boys and into Timothy’s home office.

‘I was deeply shocked and embarrassed, I was minding my own business and then suddenly there’s three burly cops standing over me saying ‘you know why we’re here right?’ 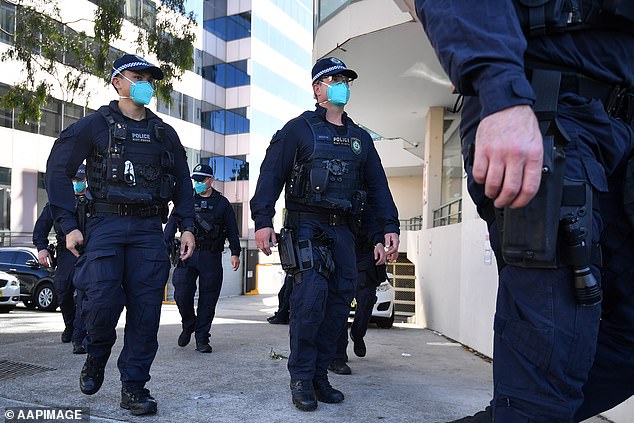 Telstra’s message service FAIL… and how it responded

October 14, 5.54pm:  Timothy calls his friend Rich to check in (they are both in a community group). Rich can’t answer so Timothy leaves a non-urgent message on Rich’s Belong (Telstra) voice-to-text message service.

October 14, 5.55pm: The service converts the message to text, but it mishears the voice message, adding a line to the SMS that Timothy did not speak: ‘I’m going to kill myself’.

October 14, around 6-6.30pm: Rich reads the incoming SMS and worried immediately tries Timothy back, who is now busy with his family. Rich phones mutual friends who say the threat is out of character, but advise calling the police as a precaution. He does.

October 14, 8pm: Three NSW Police officers arrive at Timothy’s eastern suburbs home, his wife answers and his shocked at their questioning. She shows then into the house, past his alarmed children. An embarrassed Timothy has to reassure police it’s a false alarm.

October 20: In a response to Daily Mail Australia, Telstra says it uses ‘a third party technology platform’ which ‘translates tens of millions of messages’ but ‘isn’t 100 per cent accurate’. It does not offer an apology.

Timothy managed to reassure the officers the voicemail he’d left Rich was a cheerful check-in.

‘I said something like ‘Hi good afternoon Rich, hope you’re going well, I’m doing well, let’s catch up when you’re free. It was good to hear you the other night.’

The only possible explanation he can see is that the voicemail message system completely misheard Timothy’s slight French accent.

‘It was a technological stuff-up, that’s for sure,’

Both men are part of a men’s community support program that takes mental health issues seriously.

‘I didn’t leave a voicemail saying I wanted to kill myself. It’s completely bizarre and it really upset my family.’

‘I’m still in shock, I just don’t understand how could that even happen? I thought today’s technology couldn’t make mistakes like that?’

Belong is a mobile service targeted at millennials and owned and run by Telstra. It uses Telstra’s messaging service.

A Telstra spokeswoman told Daily Mail Australia ‘like many other providers’ it uses ‘a third party technology platform to assist in the translation of tens of millions of voice to text messages each year’.

‘The technology is always improving, but as people may have experienced, converting audio to text isn’t 100 per cent accurate,’ she said.

‘We understand that this would have been a very stressful situation for Rich and Timothy’s families, and we are very glad that Rich cared for his friend the way he did.’