The UK is set to bask in temperatures peaking at 87F as a plume of heat makes its way to the country once more from the start of next week.

Following a dreary start to the month, the country will see a north-south divide as western Scotland continues to be drenched by torrential downpours while the rest of the UK enjoys spells of sunshine and dry weather.

The Met Office has issued a yellow rainfall warning for western Scotland where as much as 50mm of rain could fall in hilly areas.

However in stark contrast, bright and sunny spells are expected to make their return to the rest of the UK by Monday, with temperatures reaching 77F today before continuing to rise next week.

The mini-heatwave also comes as Prime Minister Boris Johnson brings in the so-called ‘rule of six’ from Monday in England meaning groups of more than half a dozen cannot meet socially, while lockdown will be imposed in the West Midlands from Tuesday.

Today hundreds of visitors descended upon Bournemouth beach to enjoy the warm and sunny weather. 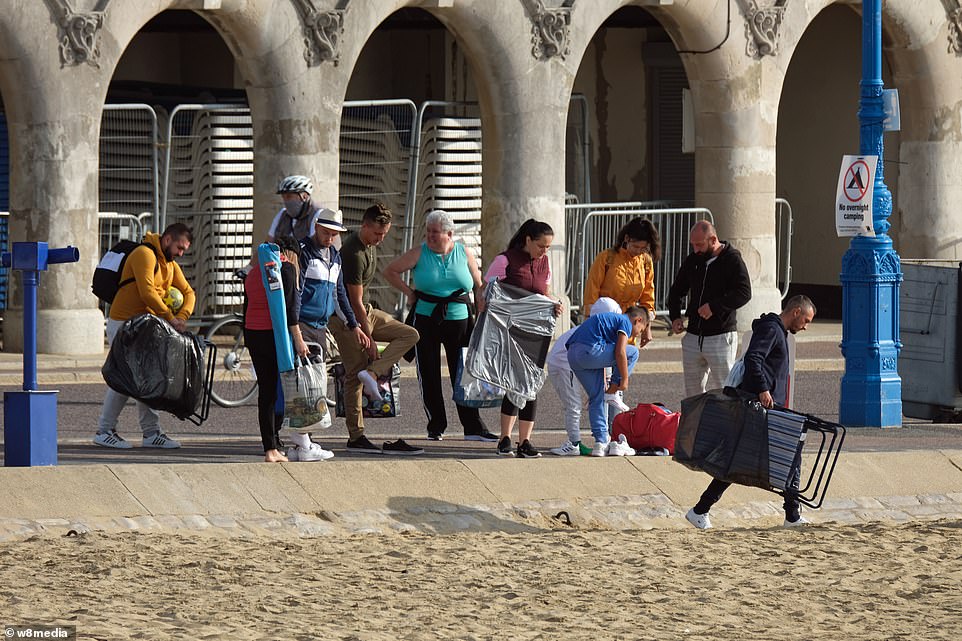 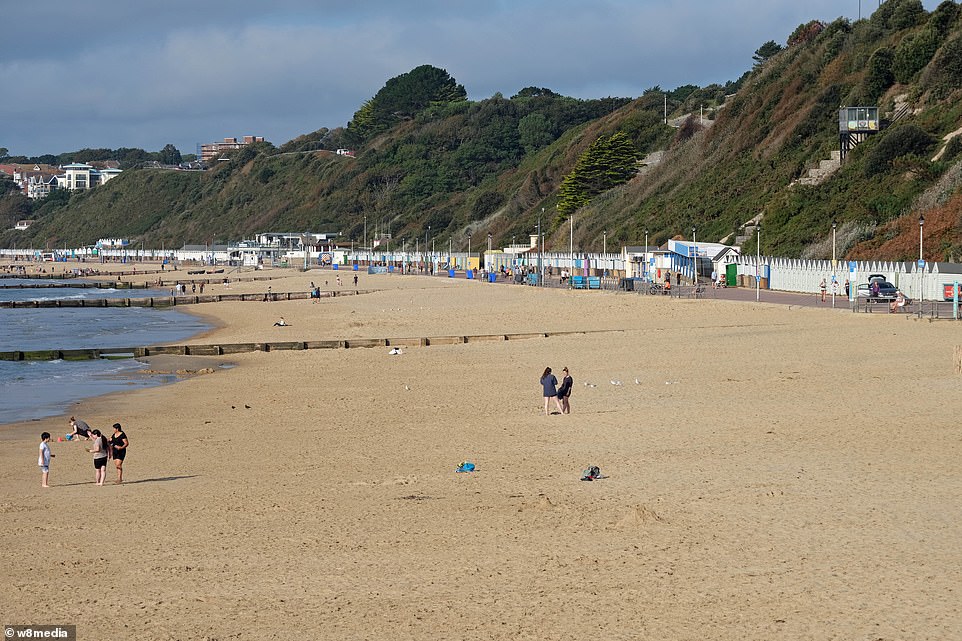 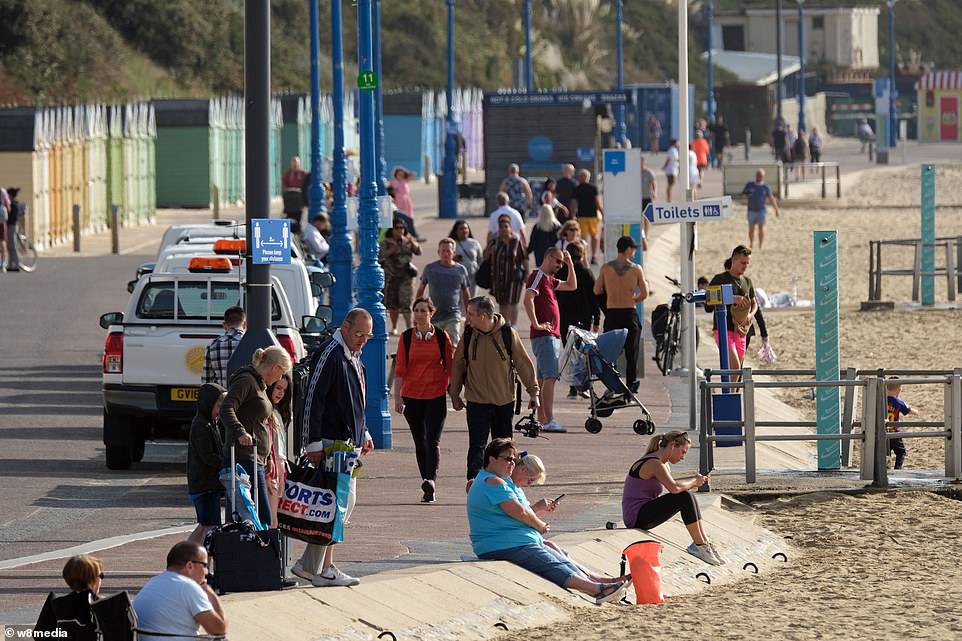 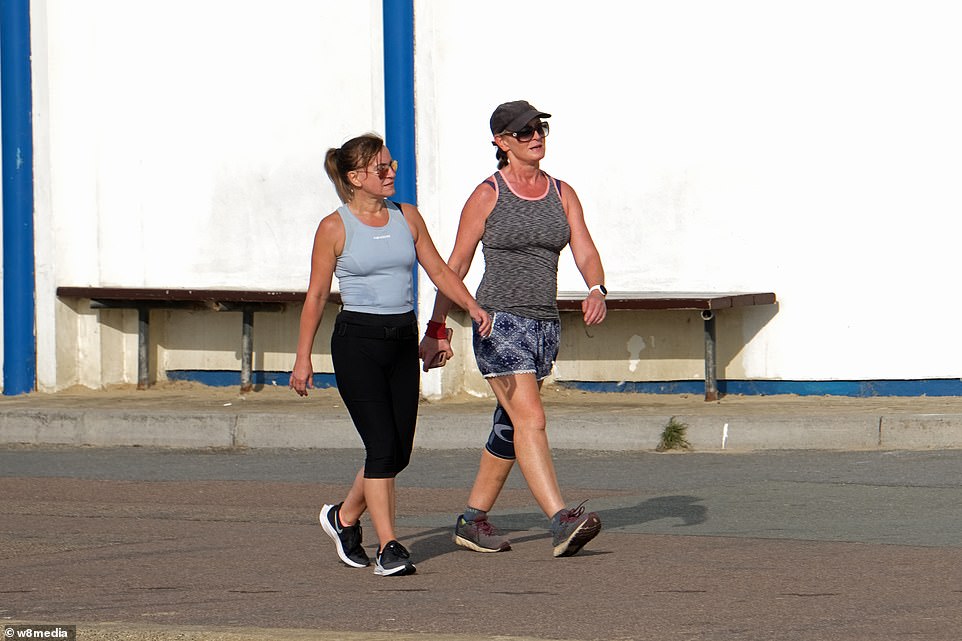 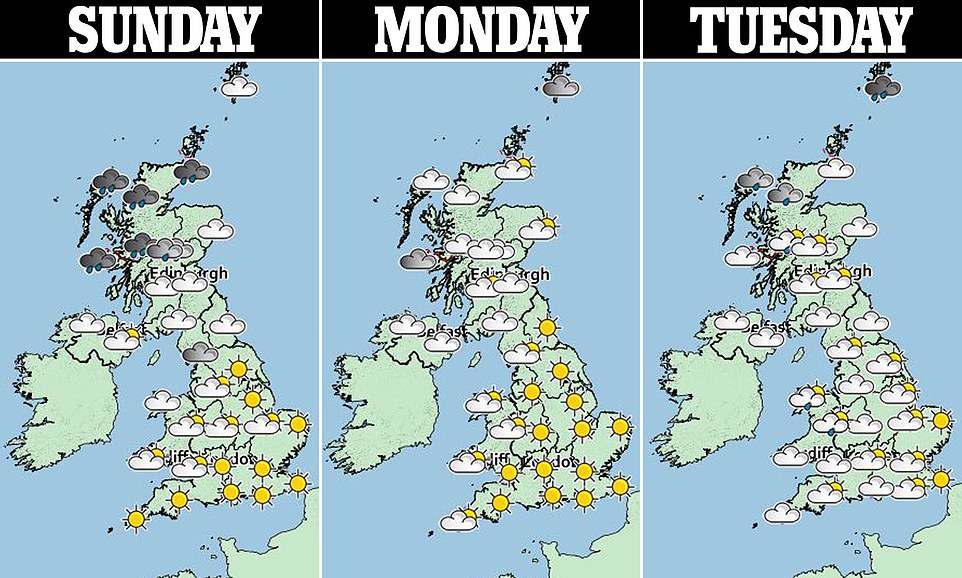 The top temperatures expected on Tuesday could hit 31C (87F) and remain into Wednesday, but there is the possibility of some thunderstorms mixed in.

Met Office forecaster Simon Partridge told MailOnline: ‘There’s a stark difference between western Scotland and the rest of the UK.

‘Across western Scotland there’s going to be rain that’s set to continue for the rest of the day. It will turn lighter and patchier as we go through the overnight period.

‘We’ve already see more than 50mm of rain in some parts of western Scotland overnight and a further 50mm is possible through the day today so there is a yellow rainfall warning for parts of north west Scotland. Also quite breezy so quite a windy day as well.

‘However in complete contrast for the rest of the UK it’s going to be a dry day. Mostly dry and the further south and east of the UK are more in the way of sunshine. We could see temperatures in the south east reaching 25C so a very different feel from one area to the other.

‘Overnight the rain in the north will become a little lighter and patchier so less of an issue but still just lingering around in the far north west of Scotland.

‘Elsewhere a dry night, light winds and we will see a little bit of patchy mist and fog around first thing in the morning across Wales and southern England.

‘On Monday things get even warmer. We still have a risk of rain unfortunately for north west Scotland and they will continue to see rain throughout the day however it will be a warm day across all parts of the country and we might even see temperatures in the low to mid 20s.

‘And then in the south east corner again, somewhere probably around the mid to the north of London, we will see temperatures peaking at 30C so a very warm and dry day, lots of sunshine and a light wind. 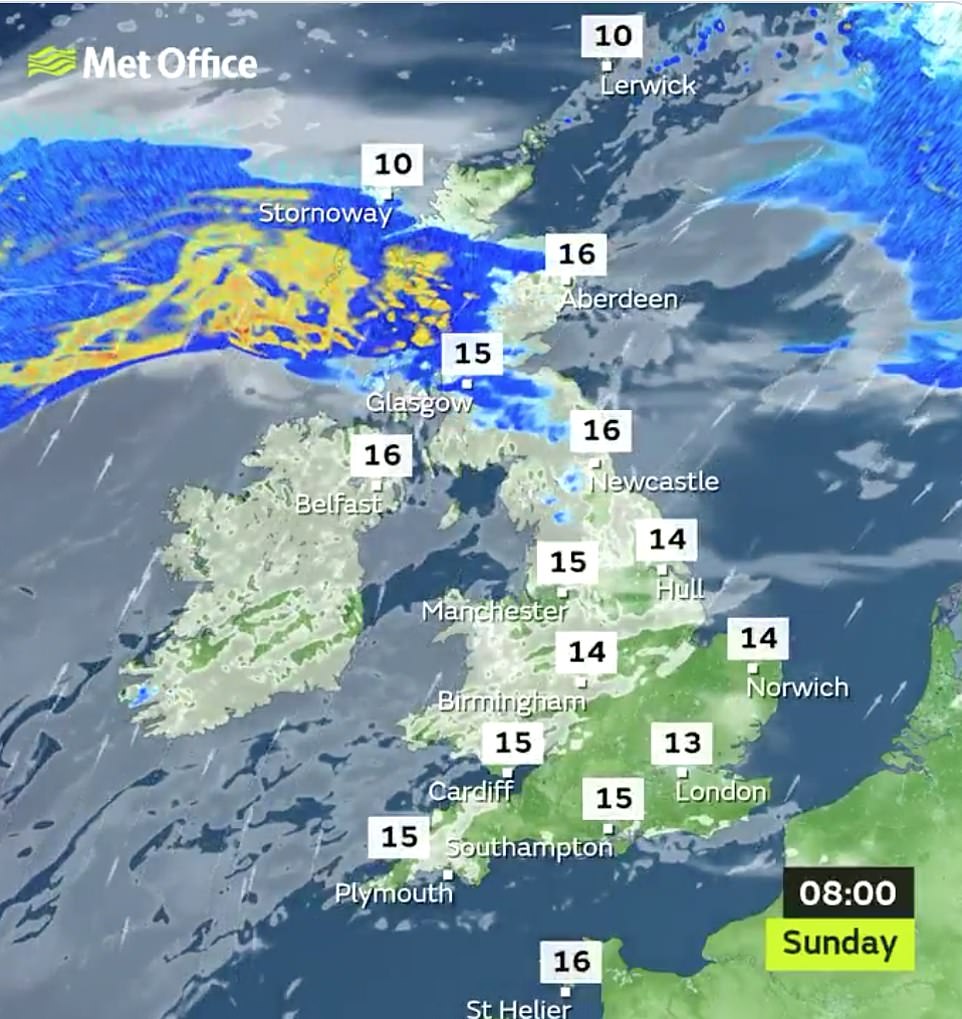 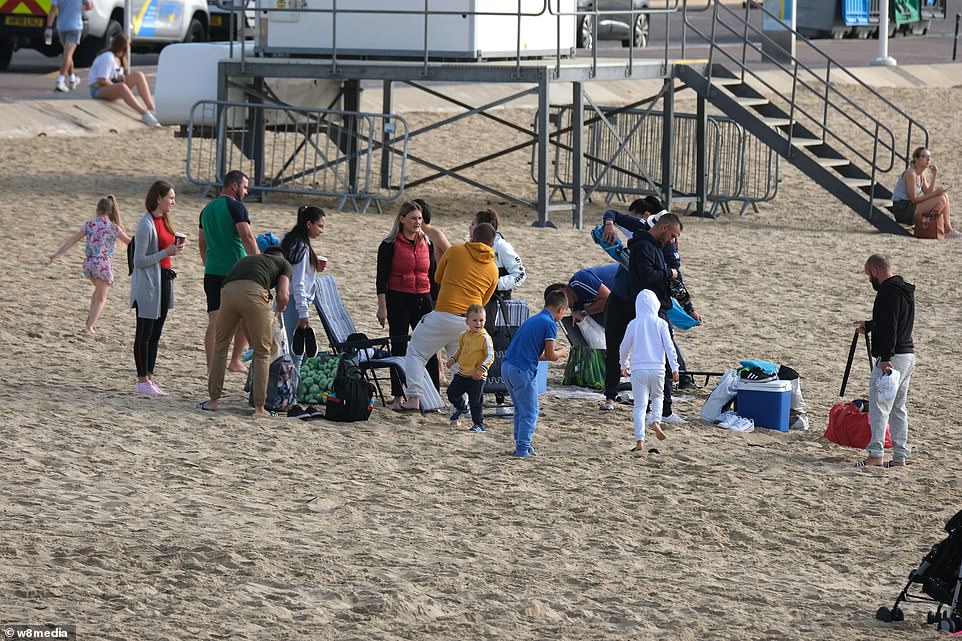 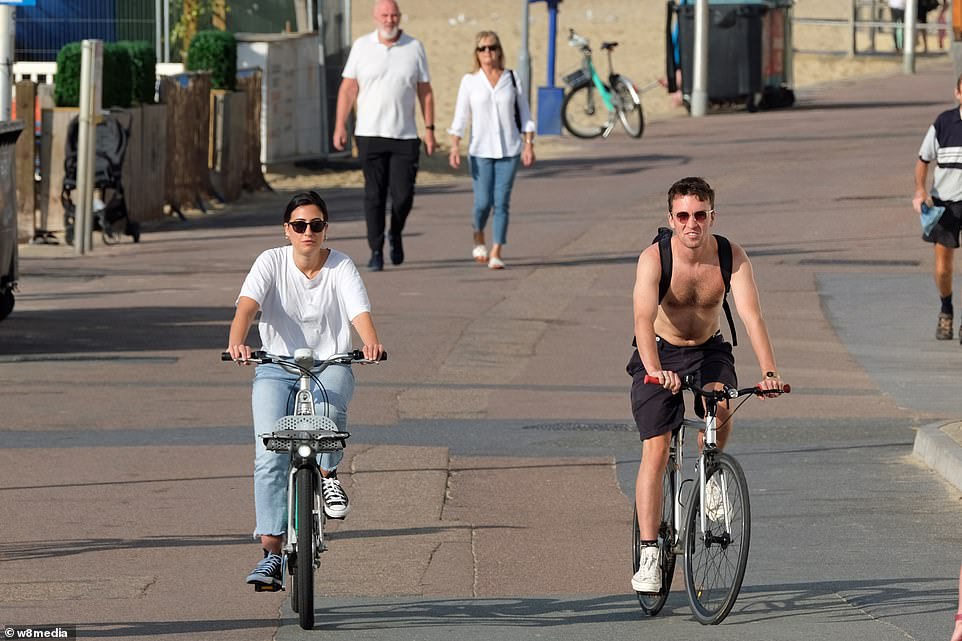 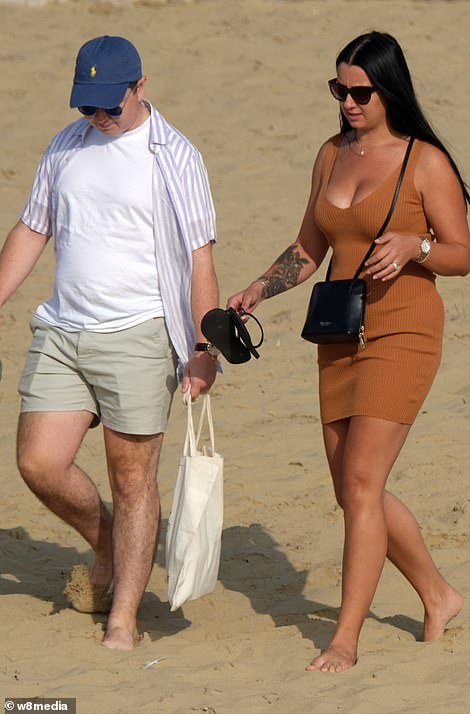 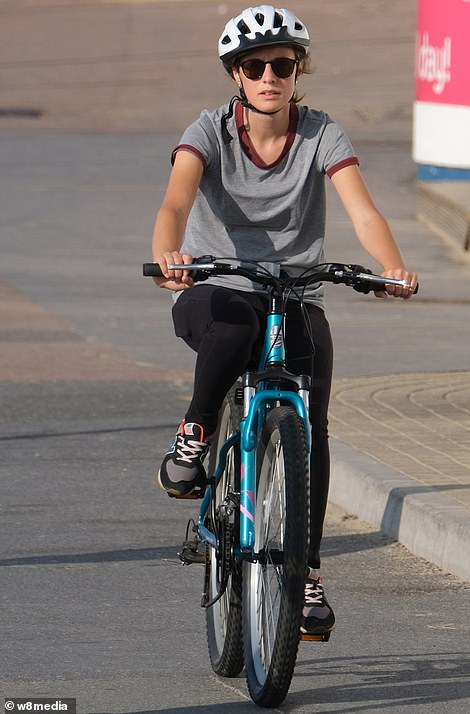 As temperatures continued to rise, people took a stroll along the beach in Bournemouth today (left) to enjoy the sunny weather. Elsewhere a cyclist was spotted riding along the promenade (right) 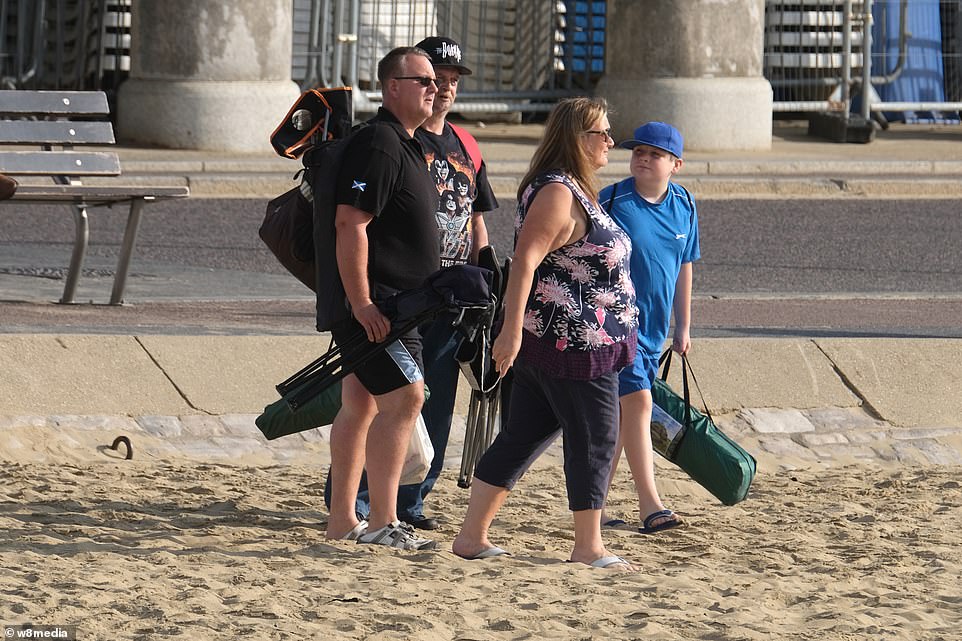 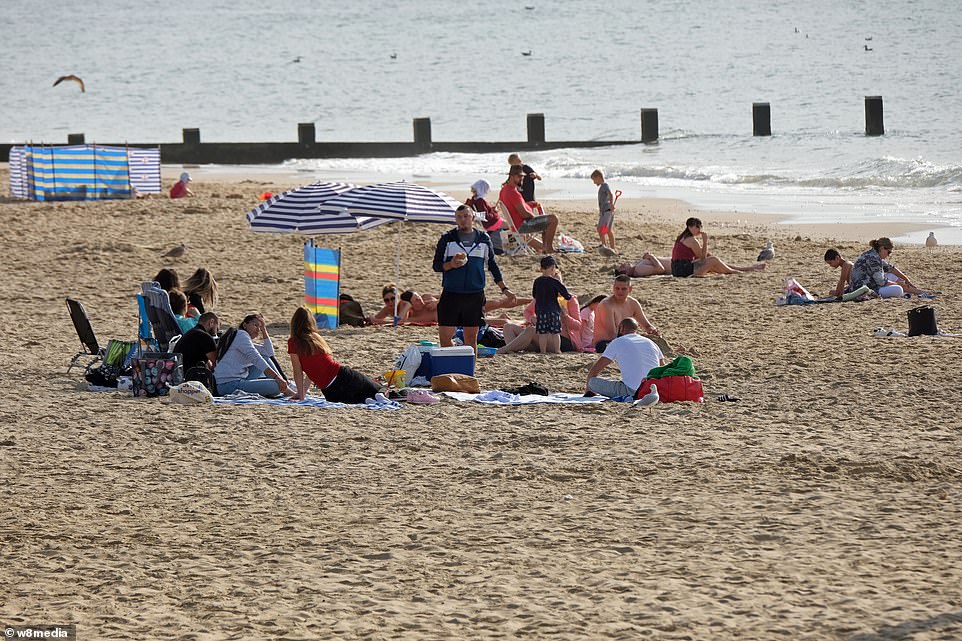 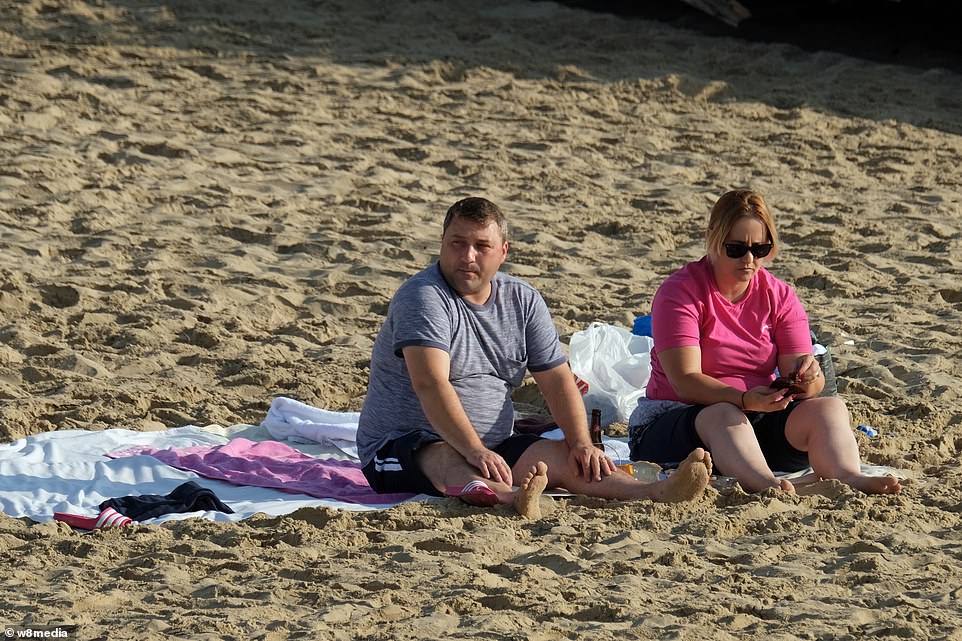 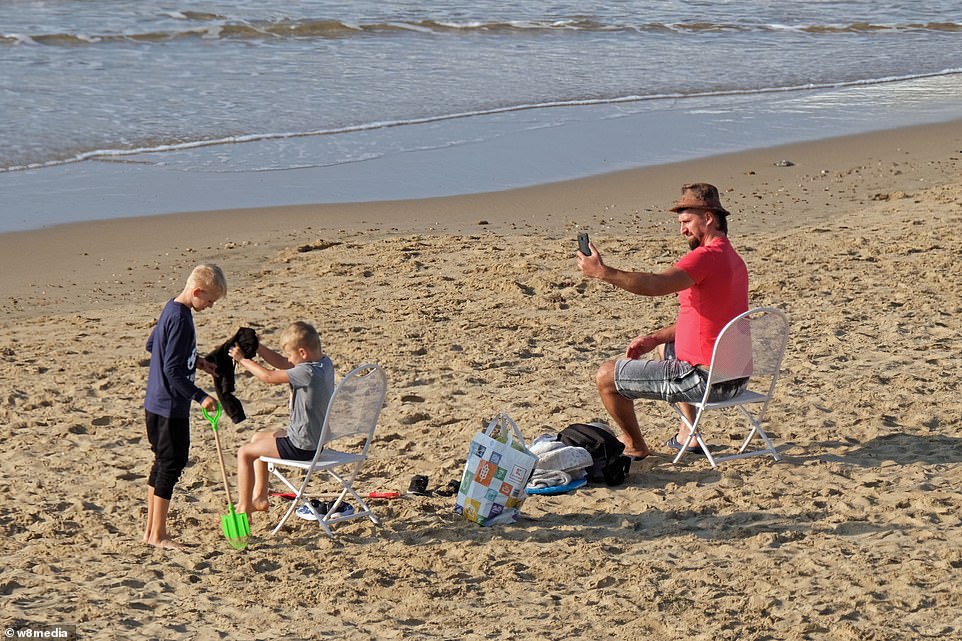 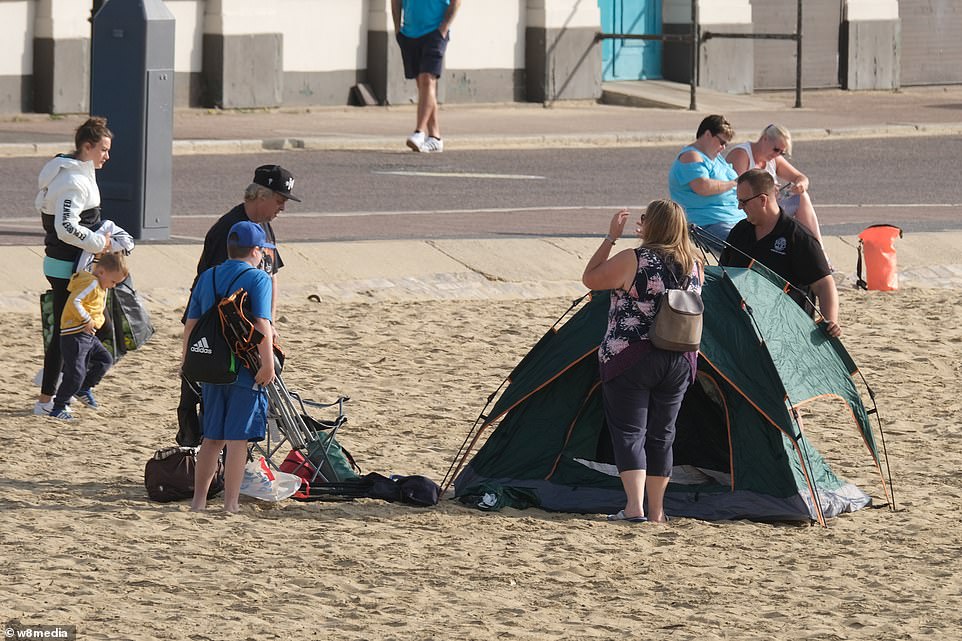 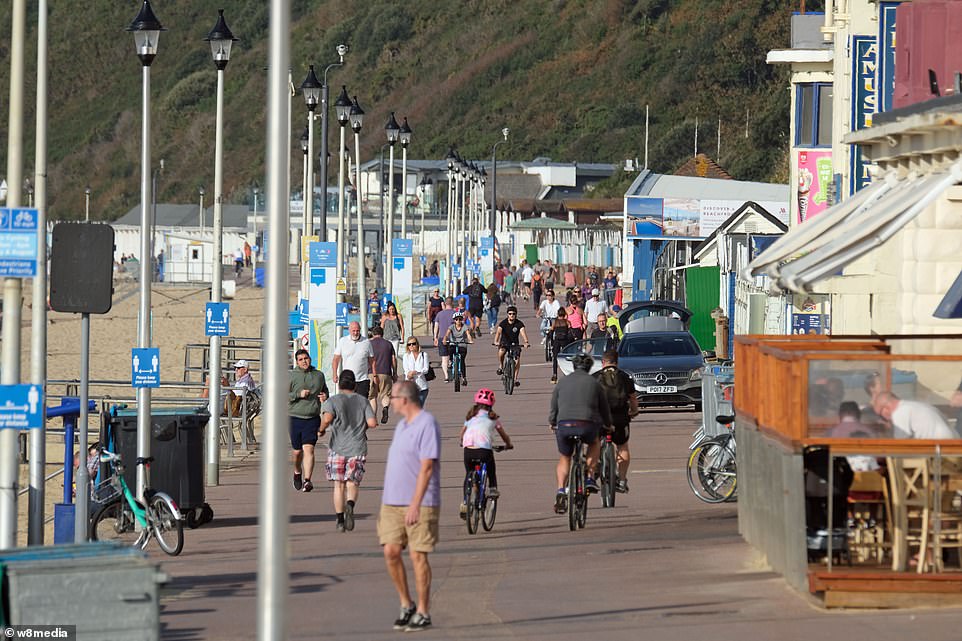 ‘Another mild generally dry night follows Monday night into Tuesday, still that little bit of rain through the north west and then there’ll be a slight change on Tuesday.

‘It will probably be overall a warmer day for the whole of the UK however it’s going to be in a very select places because we will see more in the way of cloud pushing in across many western parts of the country on Tuesday.’

From Monday gatherings of more than six will be banned in the UK as the government tries to halt a second wave of coronavirus.

The ‘rule of six’ is a dramatic reduction on the limit of 30 put in place on July 4.

Announcing the new restrictions, Mr Johnson said: ‘We need to act now to stop the virus spreading. So we are simplifying and strengthening the rules on social contact – making them easier to understand and for the police to enforce.

‘It is absolutely critical that people now abide by these rules and remember the basics – washing your hands, covering your face, keeping space from others, and getting a test if you have symptoms.’

Meanwhile Health Secretary Matt Hancock told Sky News: ‘Abiding by these rules is absolutely vital to protect life. We’ve seen the increase in the number of cases sadly in the last few days. We’ve seen that across Europe there’s a second wave that many countries have experienced. 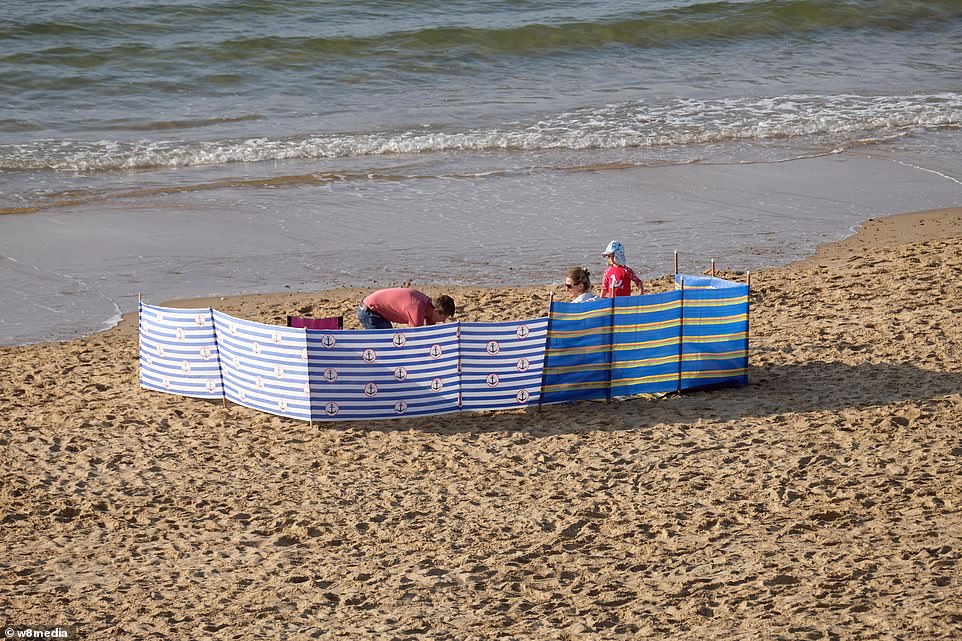 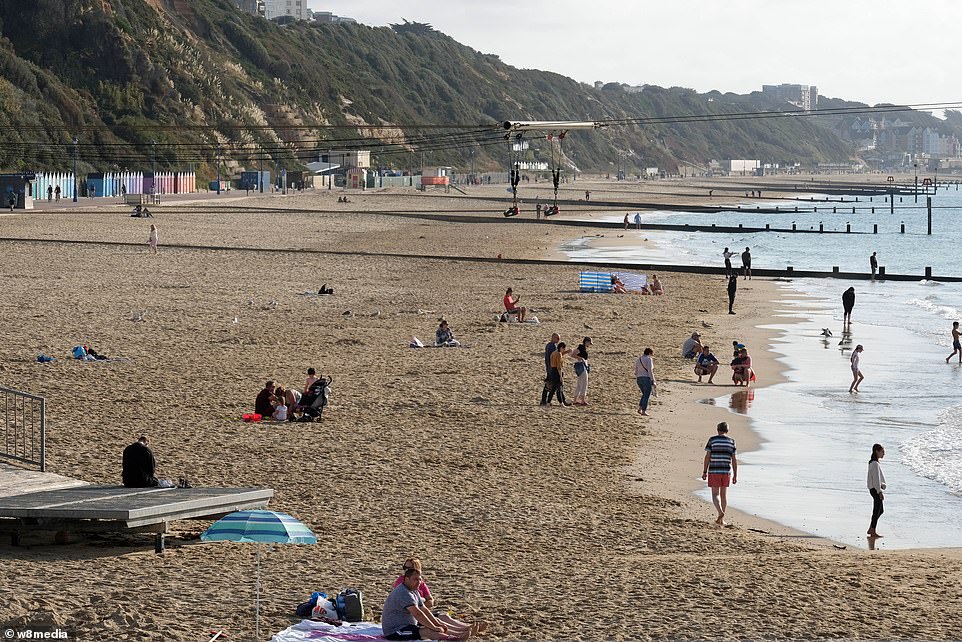 ‘Some of those countries have then got that second wave under control. If you look at what’s happened in Belgium they saw an increase and then they’ve brought it down, whereas in France and Spain that just hasn’t happened.

‘On the question of the Northern Ireland Protocol the Government has a number of international obligations and the primary amongst those in this context is about protecting the peace process.

‘In the case of coronavirus everybody understands how important it is that we together keep this under control, we can’t do it individually because of the nature of the disease.

‘So, yes, it is incredibly important that everybody follows these new rules and we’ll be bringing in strict enforcement.’