Police probing a money laundering gang believed to have smuggled more than £15 million cash out of Britain hidden in suitcases made a series of arrests today.

The 10 suspects, who are also suspected of trying to smuggle 17 migrants into the UK, were arrested in a series of dawn raids across west London.

Those arrested are believed to have been part of a ‘well-orchestrated conspiracy’ to launder millions of pounds of money made through Class A drugs and organised immigration crime, transferring it from the UK to Dubai over the last three years.

Pictured are plastic bags full of cash that the National Crime Agency (NCA), seized today during dawn raids across London. 10 suspects are now in custody, accused of smuggling more than £15 million between the United Arab Emirates (UAE) and London 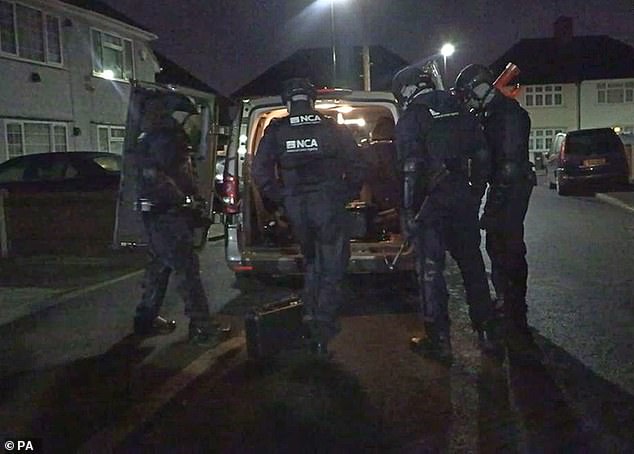 An undated handout videograb issued by the National Crime Agency of officers during early morning raids on seven home addresses in Hounslow, Hayes, Uxbridge and Southall, of suspected members of an organised crime group 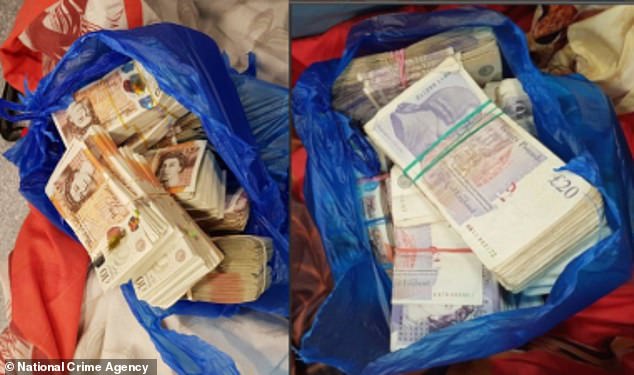 NCA officials said that those involved in transporting the cash from Dubai to London were part of a ‘well-organised conspiracy’. Pictured is some of the notes seized earlier today

Detectives said that close examination of travel records suggest the gang have transported more than £14 million in 2017 and 2018 alone.

A 41-year-old Indian national, understood to be the head of the network, was arrested at an address in Hounslow, west London.

He along with four other Indian men, four British citizens and a Frenchman, aged from 28 to 44, were held on suspicion of money laundering and facilitating illegal immigration at addresses in Hayes, Hounslow, Uxbridge and Southall.

The raids were conducted by detectives from the National Crime Agency (NCA), Britain’s equivalent to the FBI.

They recovered a quantity of cash, illegal drugs and luxury cars, including Range Rovers, Audi Q7s and BMW 5 series.

The raids follow an NCA investigation, supported by the Met Police, into cash seizures totalling more than £1.5 million made by Border Force officers over the course of 2019. 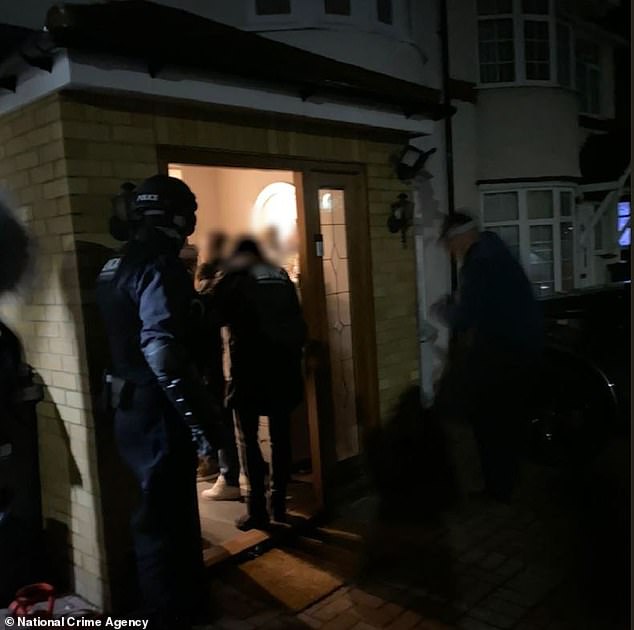 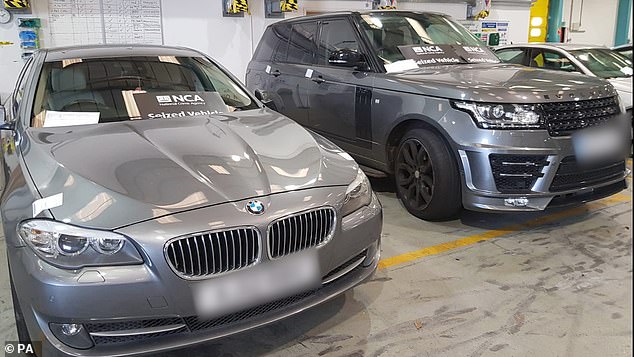 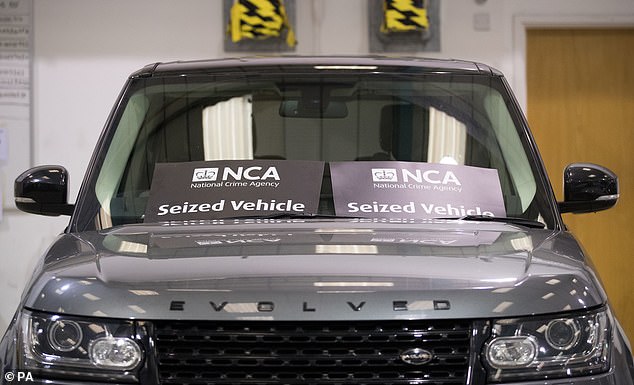 In addition to the mountains of cash, the NCA also seized illegal drugs and luxury cars, including Range Rovers (pictured), Audi Q7s and BMW 5 series

In all cases the cash was being transported between Britain and the United Arab Emirates (UAE).

Chris Hill, NCA senior investigating officer, said: ‘Cash is the lifeblood of organised crime groups and they need the services of money launderers.

‘We believe that the action we and our partners have taken will have caused permanent damage to a well-established money laundering network. 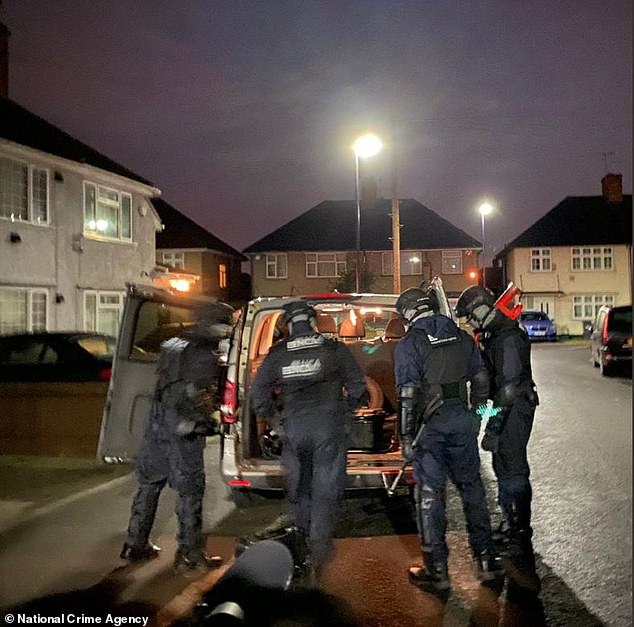 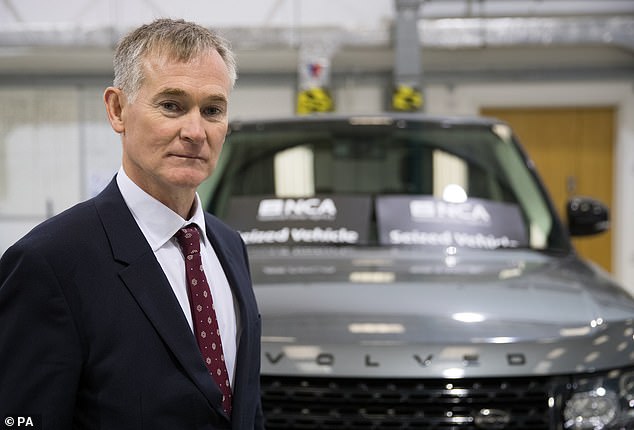 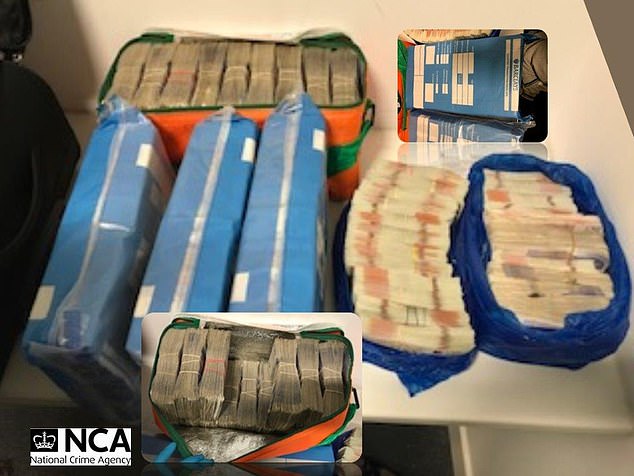 Pictured is some of the cash recovered by the NCA today. The raids follow an investigation by the NCA into seizures made by the UK border force during 2019 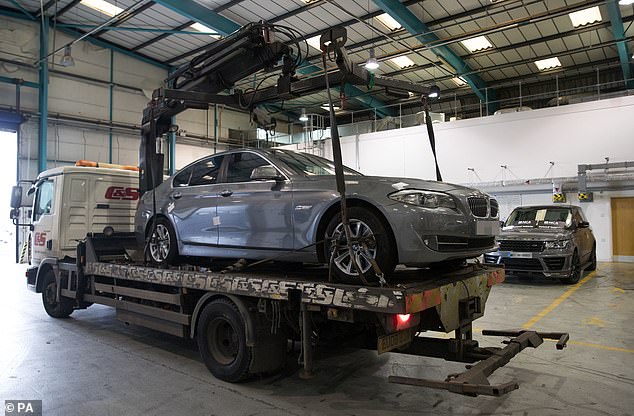 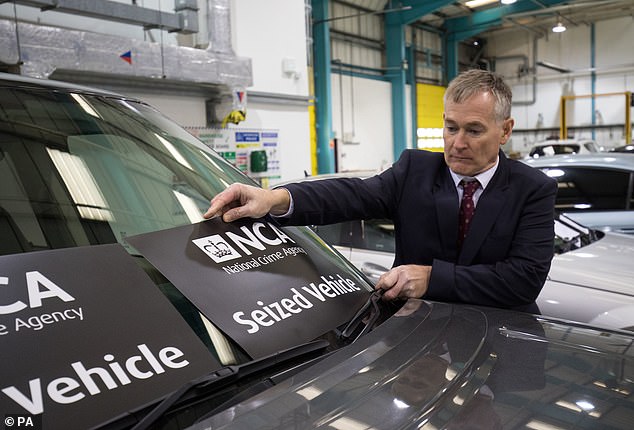 ‘We are determined to do all we can to target illicit financial flows and hit organised criminal networks where it hurts – in the pocket.’

‘We were also able to use our relationships with our international partners in the UAE to obtain evidence in relation to this case.

‘The NECC has a unique role in coordinating the response to cash smuggling with other national and international law enforcement partners.

‘Working together, our aim is to arrest and disrupt the criminals who carry out this type of activity.

‘Our joined up approach within UK Law Enforcement and across the globe helps bring more people to justice.”