Dr Deborah Birx, one of the top doctors dealing advising the White House over the coronavirus was in Tennessee on Monday to urge the closure of bars and to limit indoor dining at restaurants across the state and enforce the wearing of face masks in the hope of preventing an escalation in the coronavirus outbreak.

However, no sooner had she left the stage, Tennessee’s Republican Governor Bill Lee openly defied Dr. Birx’s recommendation and said that he would not be telling bars and restaurants to close, nor would be push for the wearing of masks.

Instead, Lee said he would allow county mayors to make the decisions on dining and masks at a local level.

‘Beyond the regions that currently have restrictions, that’s not a plan for us now,’ Lee said. ‘I’ve said from the very beginning of this pandemic that there’s nothing off the table. I’ve also said that we are not going to close the economy back down, and we are not going to. But I appreciate their recommendations and we take them seriously.’

Dr Deborah Birx, pictured, head of the White House task force, was in Tennessee on Monday and made a recommendation to shut down bars and limit indoor dining during a press conference 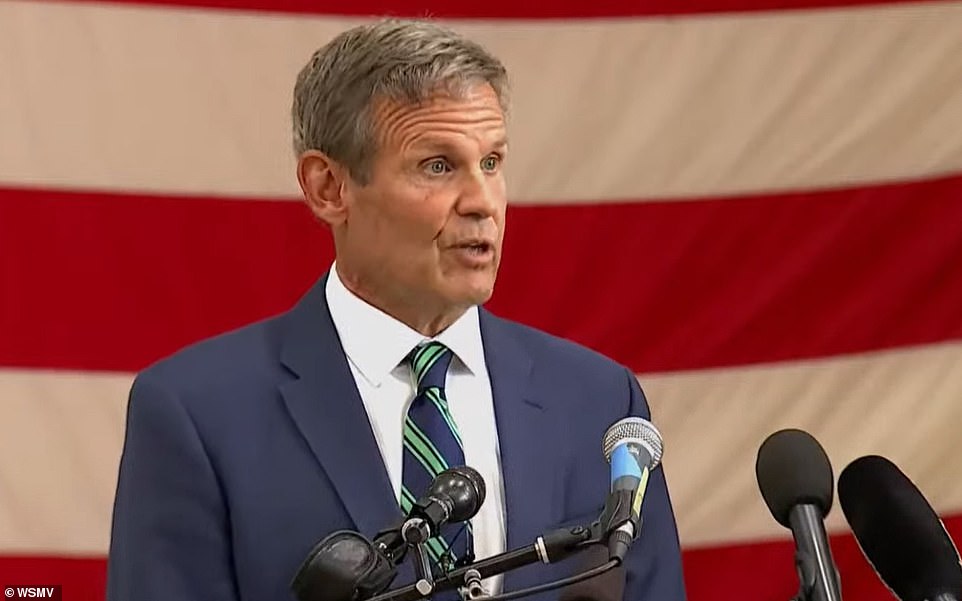 Tennessee Gov. Bill Lee (R) immediately shot down Birx’s recommendations to close bars and limit indoor seating at restaurants saying he would leave any actions to county mayors instead of a statewide mandate

Birx had already spoken with Lee and other local officials before the press conference in Nashville took place.

The disease expert who had travelled from Washington D.C. made a point of traveling to the state after the Tennessee was designated a ‘red zone’ for virus growth with Nashville in particular, identified as ‘an alarming hot spot’, according to The Tennessean.

‘It is at this very moment where we could change the trajectory of the epidemic before it goes into full … of what we call logarithmic spread, as we’ve seen across the South,’ Birx said.

Birx’s concern is that the virus now appears to be spreading among younger people who are often asymptomatic, and also into rural areas where the virus could reach new levels of infection.

She suggested that all residents in the state wear masks while bars should be shut with limited indoor dining believing that such measures could have ‘as big an impact on decreasing new cases as what we had from shelter-in-place.’ 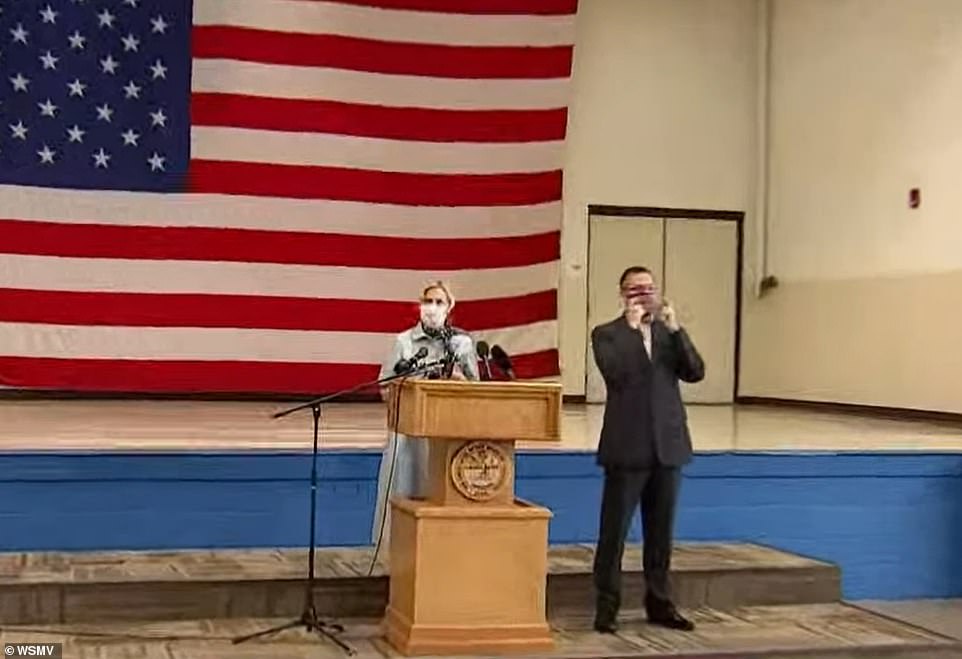 Birx, pictured, warned that Tennessee was on the verge of rapid COVID-19 spread and needed to have people wear masks 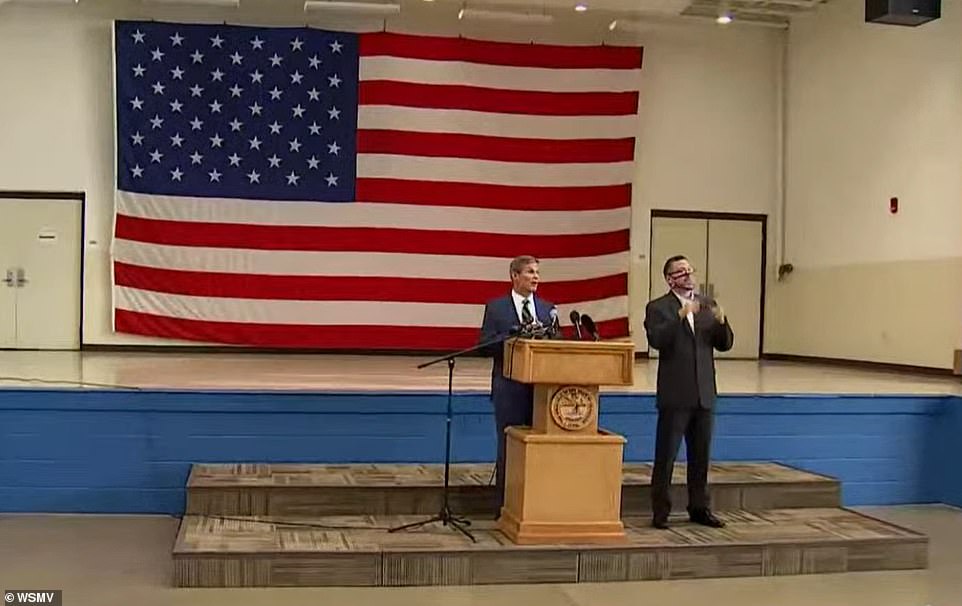 Governor Lee, pictured, also believes that Tennessee residents are more likely to listen to individual county mayors over mask requirements instead of a statewide mandate.

”If every rural mayor could mandate mask wearing — the virus is there,’ Birx said. ‘You may not see it today because it may still be in young people. But it is spreading, and it will hit your nursing homes and it will hit those that have serious consequences from this virus.’

Birx cited evidence that such a strategy was a sensible one noting that such policies were enacted in Arizona which saw the spread of the virus slow considerably.

‘They closed the bars, restricted indoor dining, 100% of the population in masks in all public spaces, decreased social gathering,’ Birx said. ‘Even though that state was in a difficult place, with extraordinarily high test positivity, they’ve been able to turn that around in the past four weeks.’

Within minutes of Birx speaking, Lee was on the same platform, without a mask of his own to openly state how he would not be following Birx’s recommendations on bars. He also explained that county mayors could make the decision individually as to whether residents in their locale were to be required to wear masks.

Governor Lee also believes that Tennessee residents are more likely to listen to individual county mayors over mask requirements instead of a statewide mandate.

“People wear masks because they believe there is a reason to do so,” he said. “And I believe they will increasingly understand that as their local officials, for example, advocate for that.” 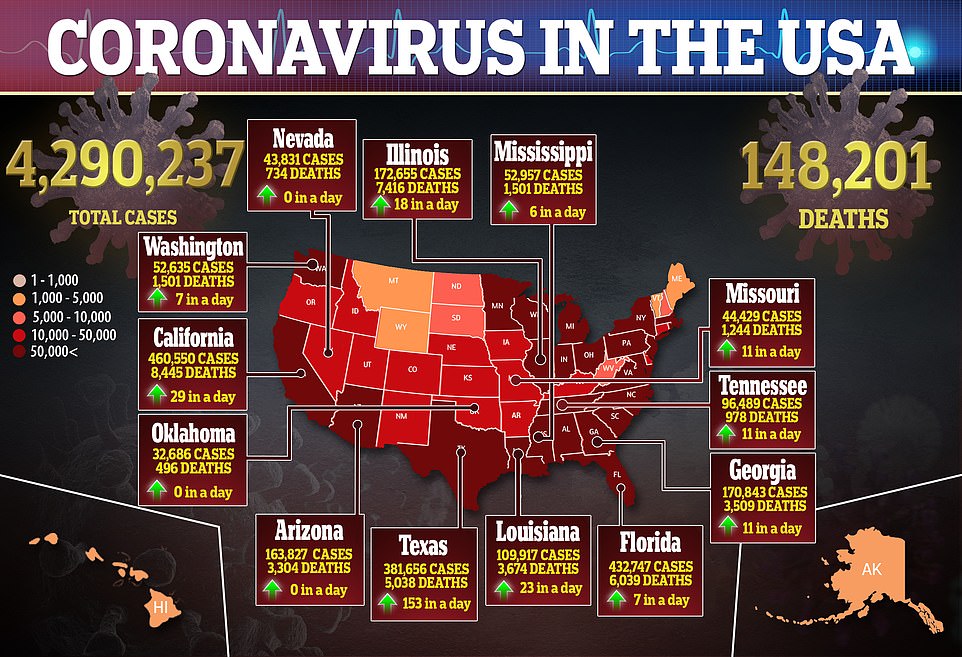 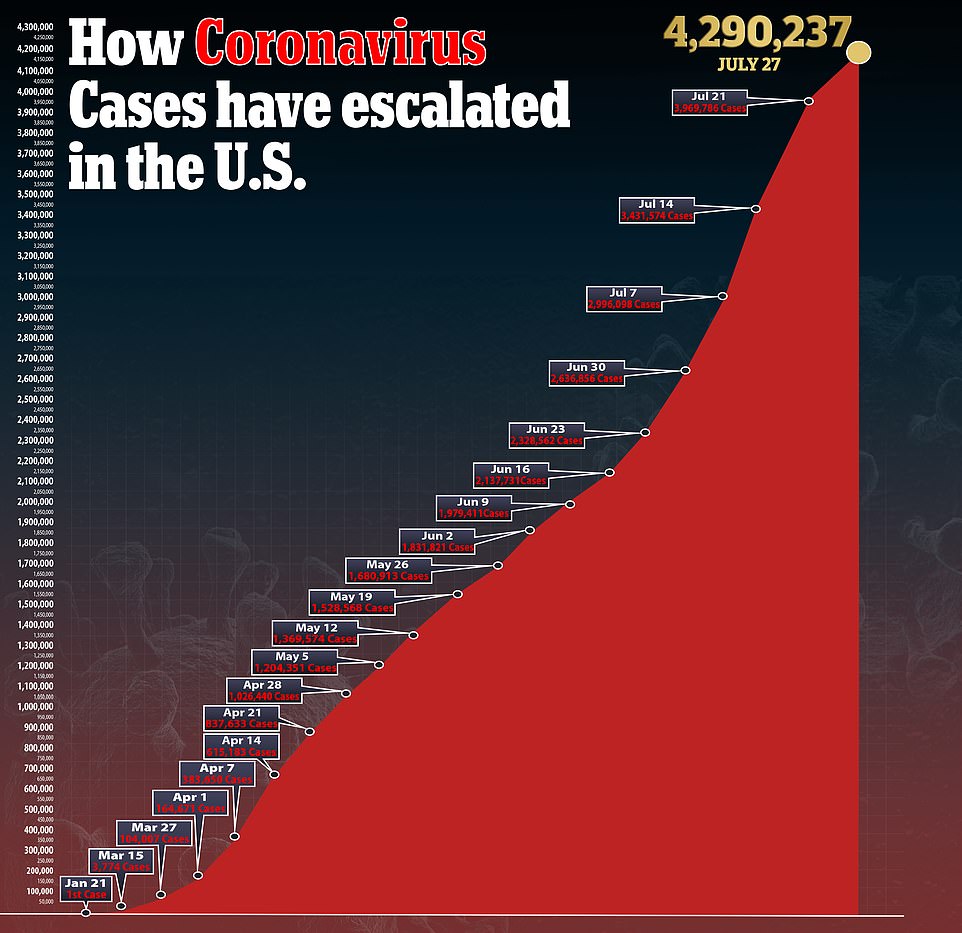 Elsewhere, new COVID-19 cases have hitting record highs in more than a dozen states while Texas, Florida, Arizona and California show signs of a plateau

There has now been almost 4.3 million infections recorded across the United States and 148,201 Americans have died from COVID-19.

The number of cases in the current hard hit states of Texas, California, Arizona and Florida are now showing signs of plateauing after a month of record surges, according to Dr Birx.

Health and Human Services Secretary Alex Azar says the leveling off of cases in the hotspot states is because people are social distancing and wearing masks but warned the US wasn’t ‘out of the woods yet’.

As cases appear to plateau in those hard hit states, the number of infections are now spiking, based on a seven-day average, in more than a dozen states, including Oklahoma, Missouri, Mississippi, Louisiana, Montana, New Mexico, North Dakota, Wisconsin, Alaska, Colorado, Hawaii and Wyoming.

Nevada, Texas and South Carolina have seen record highs in the number of deaths based on a seven-day average.

Dr Birx, who is the head of the White House COVID-19 taskforce, said the surge in cases that has plagued Sunbelt states since Memorial Day is now being seen elsewhere, which is a sign that the virus is now spreading North. 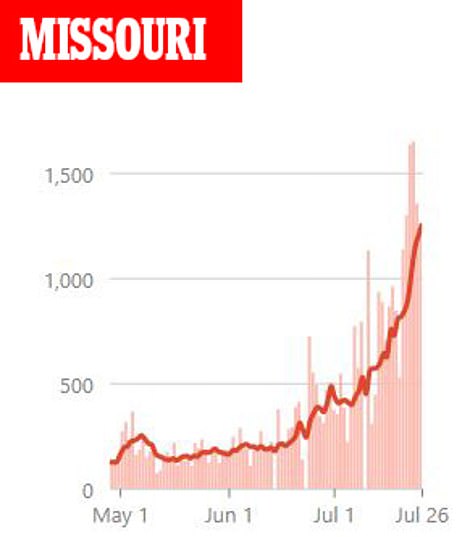 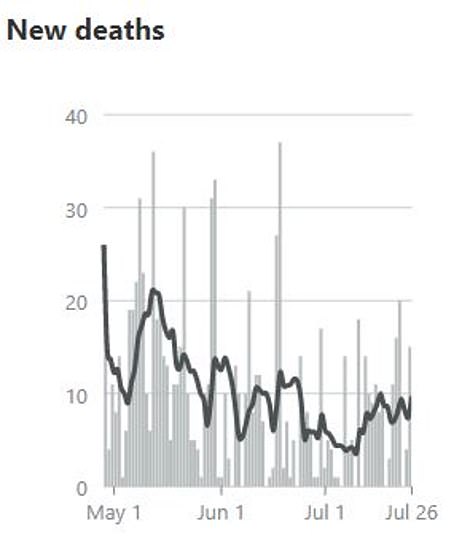 MISSOURI: There are currently 41,927 cases in Missouri and 1,197 deaths. Cases have been steadily increasing across the state since mid-June but deaths have not yet spiked 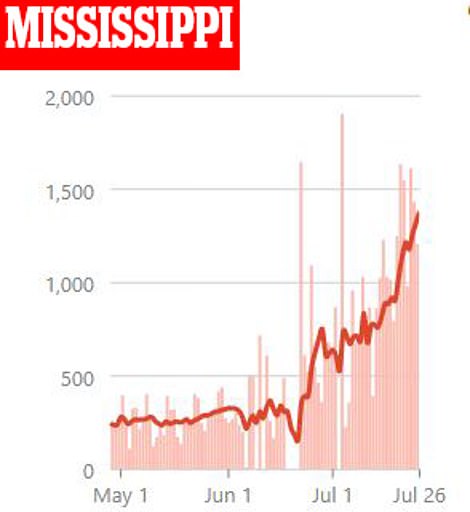 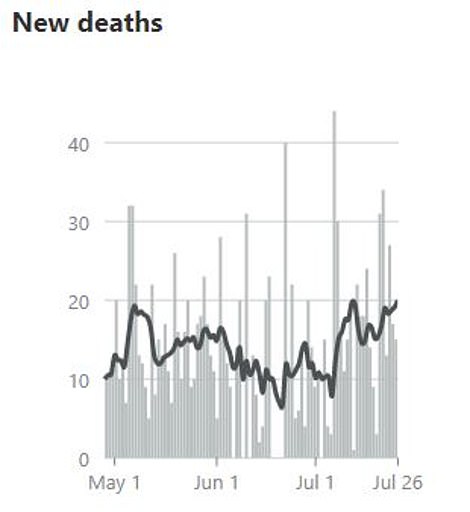 MISSISSIPPI: Cases have been rising steadily in Mississippi with the state now having 52,304 cases. There have been 1,495 deaths and the fatality rate is now showing signs of an uptick 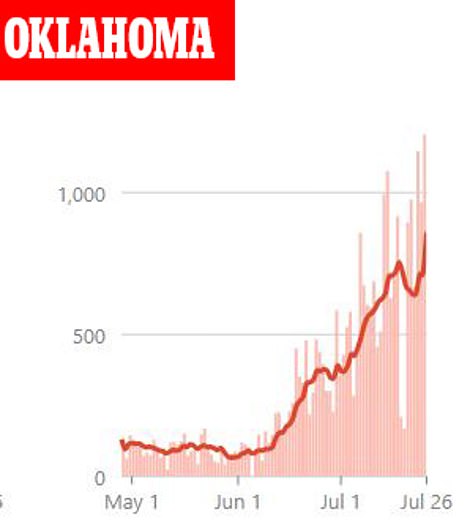 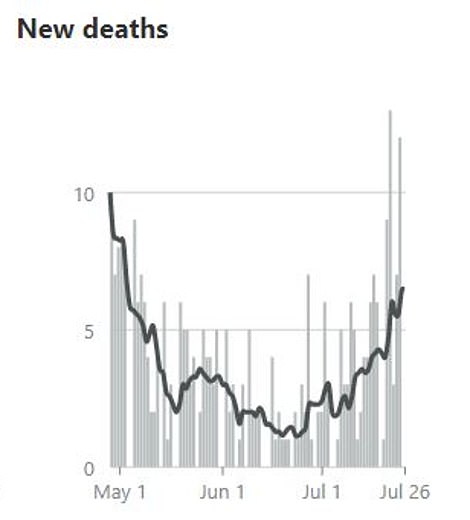 OKLAHOMA: Oklahoma currently has 31,285 cases and 496 deaths. Both cases and deaths have been surging this month

The states with rising cases should be closing bars, cutting back on indoor restaurant capacity and limiting social gatherings to 10 people, Dr Birx warned.

She also said all Americans should be wearing masks when out in public or around other people.

‘We can see what is happening in the South moving North,’ Dr Birx said. ‘We do believe there are states that do need to close their bars.’

Oklahoma hit a record for new cases five times throughout July, with 1,204 new infections on Sunday, bringing the state’s total to 31,285, according to data from the COVID Tracking Project.

In Missouri, infections surged to record daily highs on Saturday with 1,652 new cases. Infections across the state, which now has 41,927 cases, have been on an upward trajectory since late June.

Mississippi’s cases have been spiking to near record highs in recent days with 1,610 infections reported on Friday, down from the record 1,904 on July 4. Infections have surged this month with the total now at 52,304.

Meanwhile, the number of new infections in Florida, Arizona and Texas now appear to be trending downwards for the first time since late May or early June.

Deaths, however, are still rising in both Florida and Texas. While deaths have seen single daily highs in Arizona in the past week, average fatalities appear to show a leveling out.

Despite the downward trajectory, Florida on Sunday became the second state after California to overtake New York, the original epicenter of the US outbreak. 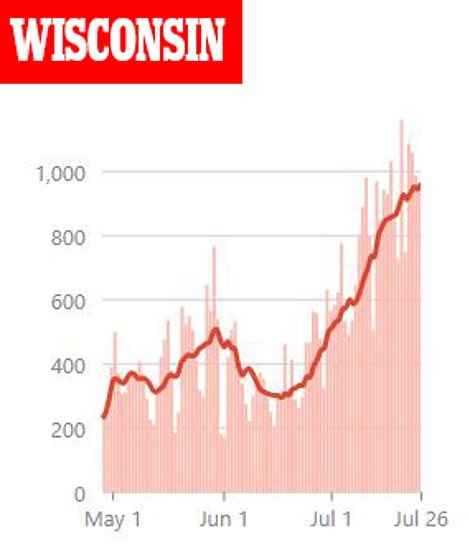 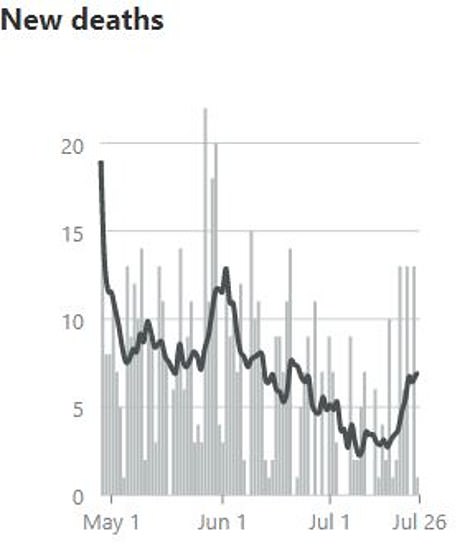 WISCONSIN: Cases in Wisconsin surged to a single-day high of 1,161 on July 21. Cases across the state, which now total 52,680, have been trending upwards since mid-June. There has also been an uptick of deaths in the state with the death toll now at 899 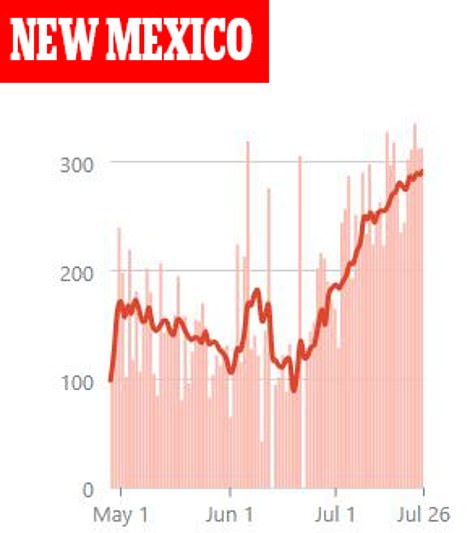 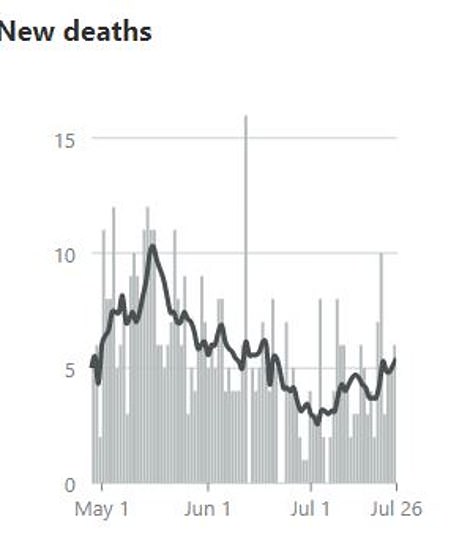 NEW MEXICO: New Mexico had a record 335 cases on Friday with the state’s total now at 18,788. Deaths are also on a slight upward trend with the death toll now at 607 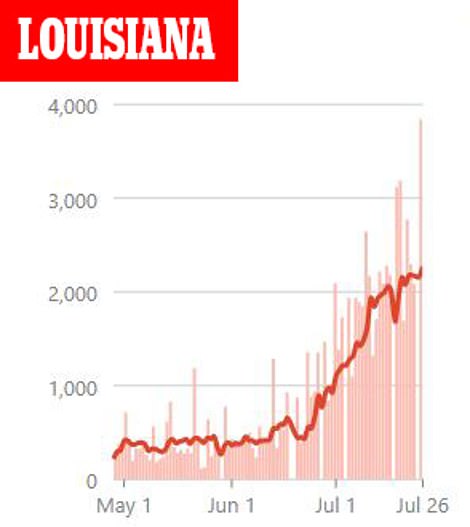 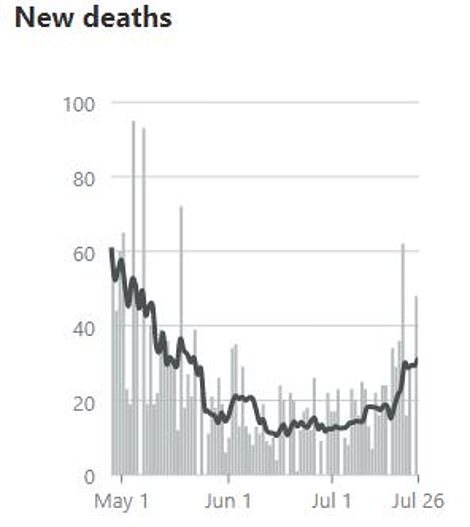 LOUISIANA: New cases surge in the southern state to record high of 3,840 on Sunday, bringing the state’s total to 107,574. Cases have been trending upwards since late June. Deaths started trending upwards last week after initially declining in May 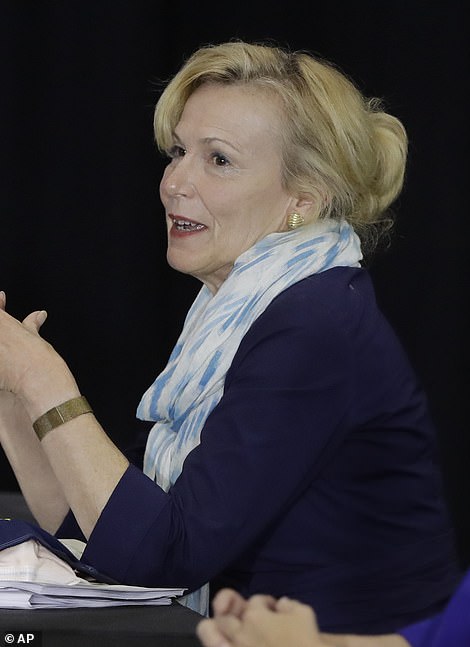 Dr Birx, who is the head of the White House COVID-19 taskforce, said the surge in cases that has plagued Sunbelt states since Memorial Day is now being seen elsewhere, which is a sign that the virus is now spreading North

Still, New York has recorded the most deaths of any US state at more than 32,000 with Florida in eighth place with nearly 6,000 deaths.

Dr Birx said last week that there were signs cases in Florida, Texas, Arizona and California were now plateauing.

‘We’re already starting to see some plateauing in these critically four states that have really suffered under the last four weeks,’ Birx told NBC’s Today.

‘This first wave that we see now across Florida, Texas, California and Arizona began with under 30 years olds – many of those who were asymptomatic.

‘Until you can see that explosion, it’s hard for people to understand how deeply you have to clamp down,’ Dr Birx said.

‘That’s why we called out the next set of cities where we see early-warning signs, because if you make changes now, you won’t become a Phoenix.’

The number of new infections in Florida, Arizona and Texas now appear to be trending downwards for the first time since late May or early June. Deaths, however, are still rising in both Florida and Texas. While deaths have seen single daily highs in Arizona in the past week, average fatalities appear to show a leveling out

California recorded a single daily high of 12,807 new cases on July 21. The state’s total number of cases now tops 453,659 and is the highest toll in the United States

Health and Human Services Secretary Alex Azar said people ‘stepping up to the plate’ is the reason for some of the ‘plateauing’ in coronavirus cases being seen in Arizona, California, Florida and Texas.

In an interview Monday on Fox News’ Fox and Friends, Azar said officials think ‘it’s due to the fact that people are actually wearing their masks.’

He said they’re also social distancing and practicing good hygiene, and he complimented governors for closing bars, where it’s difficult to be socially distant and wear a mask.

‘So people are stepping up to the plate and doing what we’re asking and what the governors are asking and we see it has an impact,’ Azar said.

‘While Dr Birx says we’re seeing signs of plateauing, we’re not out of the woods yet,’ he said, adding that next few months would be crucial.

As the pandemic has spread from the early epicenter of New York to the South and West, federal, state and local officials have clashed over how to ease lockdowns imposed to curb the infection rate, including in some states whether to rollback reopenings.

Hostility to the idea now appears to be dwindling, including from the Republican administration of President Donald Trump, who once dismissed mask-wearing as an effort to be politically correct.

Trump, who faces falling poll numbers over his handling of the health crisis ahead of the November election, has long refused to wear a mask in public but last week encouraged Americans to do so. 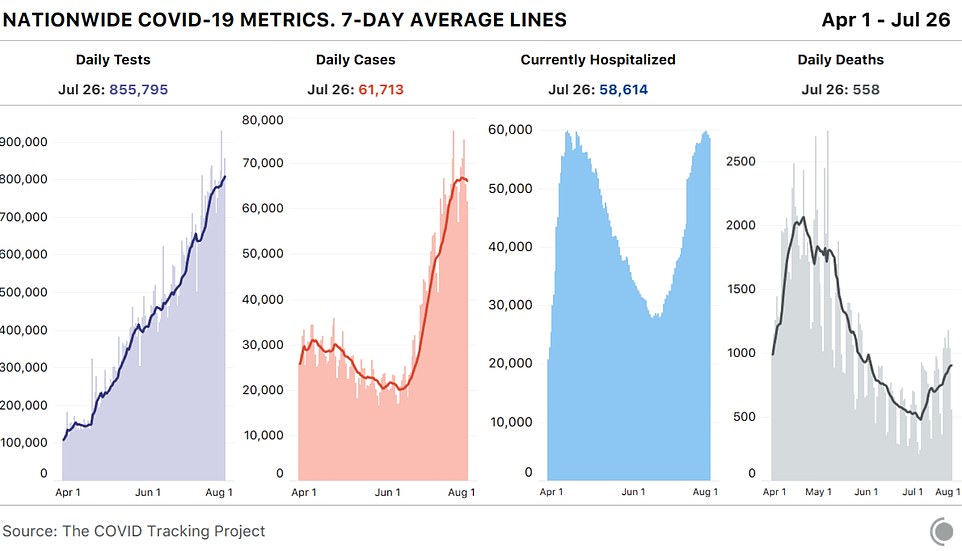 There has now been more than 4.2 million infections recorded across the United States and nearly 147,000 Americans have died from COVID-19 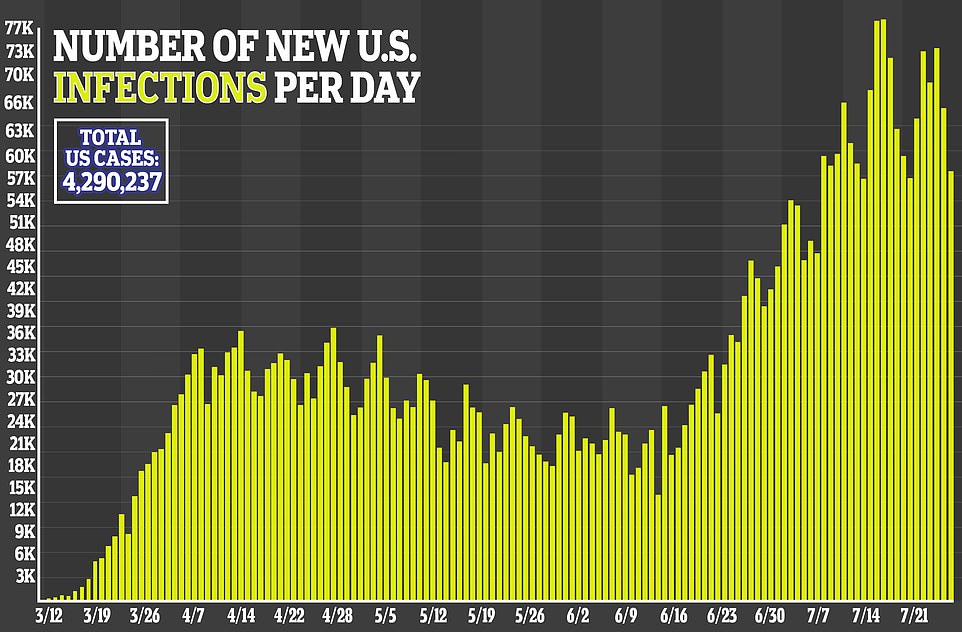 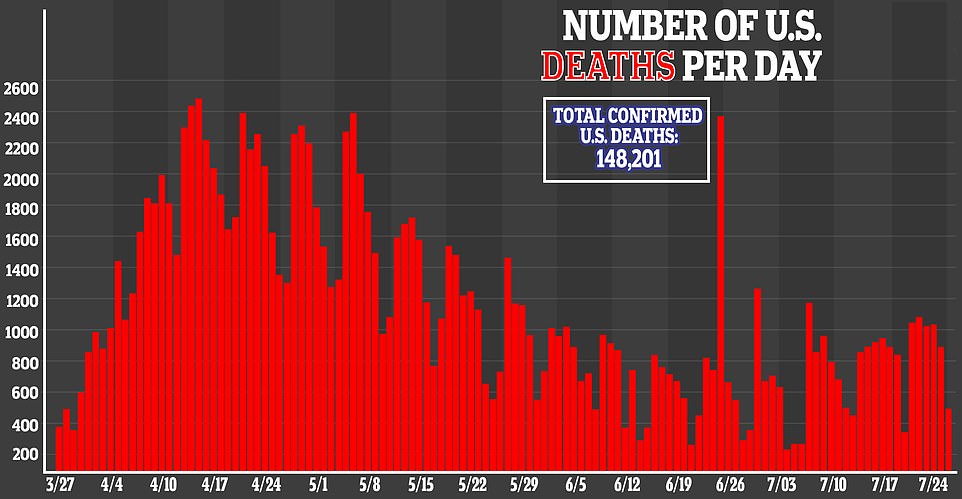