Tennis star Taylor Townsend, 24, reveals she is pregnant with her first child and shows off bump

A grand slam surprise! Tennis star Taylor Townsend, 24, reveals she is pregnant with her first child, as she shows off her bump one month after playing in the US Open – but remains tight-lipped about the father’s identity

The 24-year-old made the surprise announcement on Instagram on Wednesday, showing off her baby bump at the end of a two-minute video.

‘BIG ANNOUNCEMENT,’ she wrote. ‘Life has a funny way of putting you exactly where you are supposed to be. I’m so excited to embark on the journey of motherhood!!’

‘Life has a funny way of putting you exactly where you are supposed to be. I’m so excited to embark on the journey of motherhood!!’ she wrote on Instagram, where she changed her bio

Taylor celebrated the exciting news with an IGTV video that looked back at her career and accomplishments.

‘At four years old I was told I would never make it and I should quit,’ she says in the clip as old photos appear on screen.

‘At 12 I became the youngest-ever to win the Georgia state qualifier. At 15, I didn’t think I was good enough, but I proved myself wrong by winning the junior Australian open in singles and in doubles,’ she continues, while the video shows her play.

‘My entire life, my entire career, I’ve heard you can’t, you won’t, and I’ve used it as a reason to fight hard and as motivation to keep playing.

‘I’m sure this won’t be any different, so I’ll have to prove them wrong again,’ she says.

‘Because now I have the best reason ever to play. You might think what I’ve done so far is impressive, but just wait until you see what I do next,’ she says. 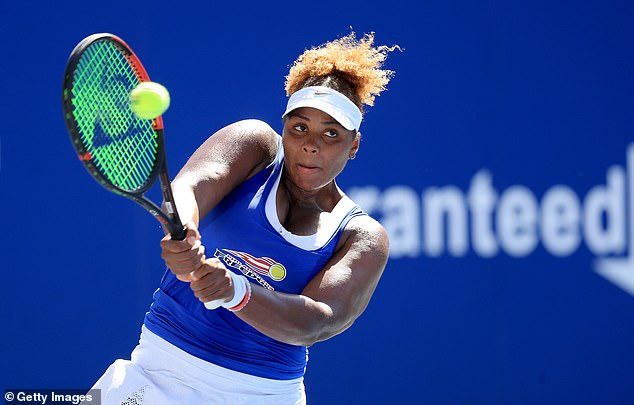 Expecting: Her March due date means Taylor (pictured during World TeamTennis on August 1) was pregnant during the US Open, where she played in singles and doubles tournaments 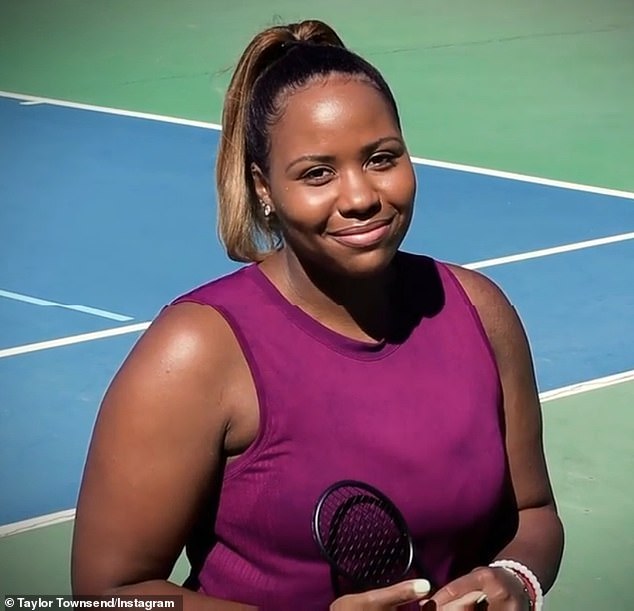 Privacy: Taylor has been private about her relationship status, so the baby’s father isn’t known to the public

Here, the camera shows Taylor on the court in a purple top and leggings, holding a tennis ball in one hand and cradling her pregnant belly in the other.

Her baby is due in March, and she has updated her Instagram bio to read ‘mom to be.’

Taylor has been private about her relationship status, so the baby’s father isn’t known to the public.

Her due date means Taylor would have been late in her first trimester or early in her second trimester during the US Open, where she played in singles and doubles tournaments.

Though she didn’t make it past the first round in singles, she and doubles partner Asia Muhammad made it to the semi-final round.

At the Auckland Classic in Australia earlier this year, the pair defeated Serena Williams and Caroline Wozniacki.

Taylor will hardly be the first professional tennis player to have a baby with hopes of returning to the game. 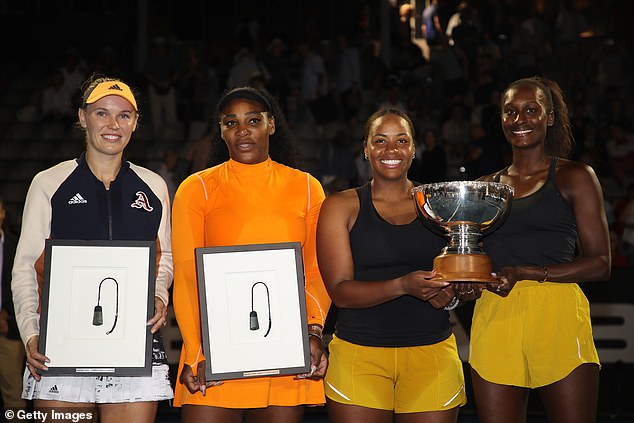 Pros: Taylor and her partner defeated Serena Williams and Caroline Wozniacki at the Auckland Classic in Australia earlier this year. Serena returned to the court five months after giving birth

Victoria Azarenka of Belarus also had a son named Leo in 2016.

Due in part to both moms, in 2018 the Women’s Tennis Association changed its rules for women who take time off for pregnancy.

The new rule freezes the player’s rank in the event of injury, illness or pregnancy.

‘Our players should feel comfortable and confident to take time away from the courts to have a family or recover from injury, and I think these new rules support that,’ Azarenka said in a statement at the time.

‘This is a really good first step and we are using it as a base to continue to look for ways to improve and highlight the importance of mothers working and being on Tour.

‘My goal as a member of the Players’ Council is to make sure that the WTA is the pioneer of being the most progressive and inclusive association in sports.’