It’s a ‘terrifying epidemic’ that sees young adults inhaling from giant nitrous oxide – or better known as laughing gas – cylinders, and it’s becoming increasingly popular, according to the experts.

Some young people who have inhaled the substance, which causes a feeling of euphoria, relaxation and dissociation from reality, have been left with spinal cord damage, burst lungs and ‘unable to walk’.

Taking to TikTok and other platforms, those negatively impacted by the trend have continuously warned about the risks – including Kerry Donaldson, 25, from Newham in London.

The former receptionist revealed in July 2022 how her ‘hippy crack’ binges damaged her spinal cord and forced her to rely on her dad for round-the-clock care.

Elsewhere, Alex Littler, from Cheshire, was rushed to hospital on 20 June this year after complaining of a swollen neck, breathlessness and that his chest felt like ‘popping bubble wrap’ when touched due to the air leaking from a ruptured lung.

The year 11 student was forced to confess to doctors and devastated mother Cathy McCann, 44, that he’d inhaled nitrous oxide – or ‘nos’ – over the weekend while at Parklife music festival in Heaton Park, Manchester, on June 11 and 12.

According to the European Union drugs monitoring agency EMCDDA, the recreational use of nitrous oxide is on the rise in Europe among young people, producing worrying numbers of poisonings.

The growing popularity of the substance stems from its wide over-the-counter availability, low price, ease of use and the false perception that it is safe, the Lisbon-based agency said.

Taking to TikTok and other platforms, those negatively impacted by the trend have continuously warned about the risks (pictured) 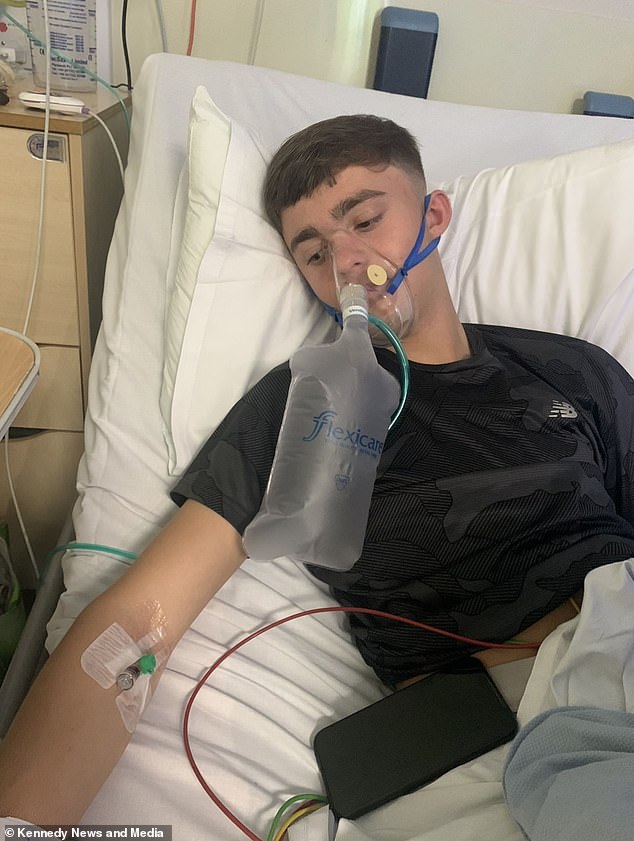 Alex Littler (pictured), from Cheshire, was rushed to hospital on 20 June this year after complaining of a swollen neck, breathlessness and that his chest felt like ‘popping bubble wrap’ when touched due to the air leaking from a ruptured lung 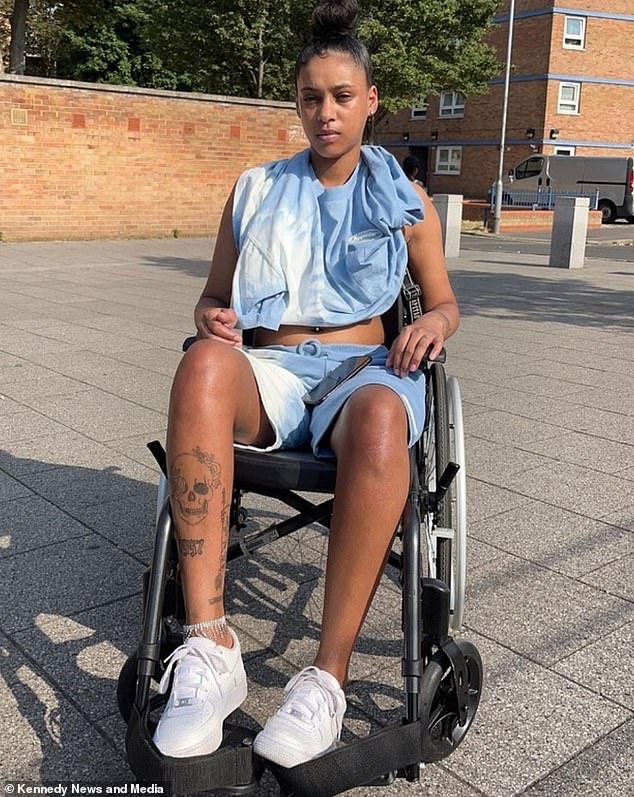 Kerry Donaldson (pictured), 25, from Newham in London, revealed in July 2022 how her ‘hippy crack’ binges damaged her spinal cord and forced her to rely on her dad for round-the-clock care 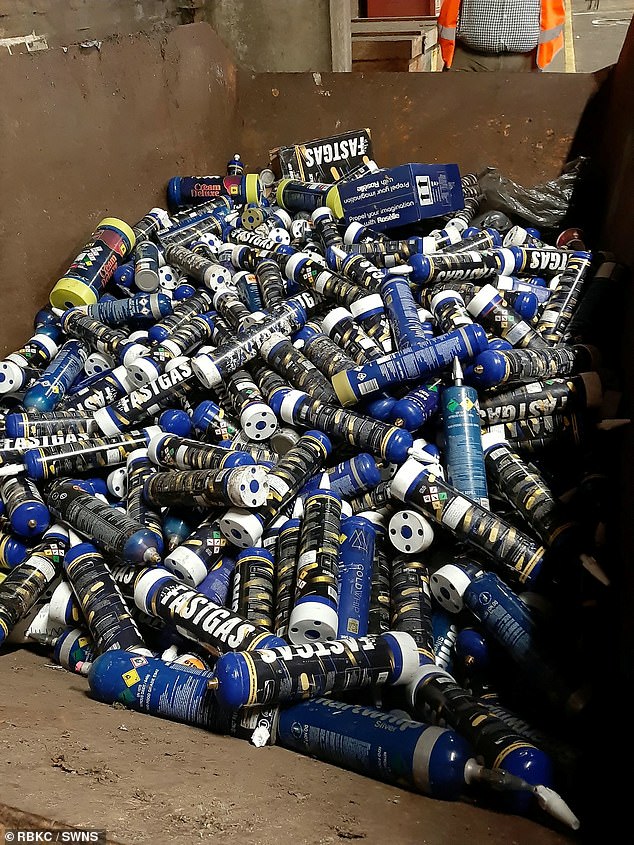 In the United Kingdom, nitrous oxide is the second most prevalent drug among young adults aged 16 to 24 years, after cannabis, the EMCDDA said.

It has a legitimate wide range of medical, industrial and commercial uses, particularly as propellant in whipped cream dispensers or water siphons for which purpose it is sold in compact, inexpensive cartridges online or in supermarkets.

In some European countries, particular concerns have been raised since 2017, when larger cylinders of the gas that deliberately target the recreational market appeared, often luring teenagers inexperienced with drug use.

The cartridges are normally consumed by filling party balloons, from which the gas is then inhaled, but more recently users have been inhaling directly from dispensers or cartridges, which poses a high risk of severe cold burns and lung injury. It also affects several brain and spinal cord networks.

What is Nitrous Oxide and is it illegal?

Nitrous Oxide, has been nicknamed ‘laughing gas’ due to the euphoric and relaxed feeling people who inhale it can sometimes feel.

The substance – also known as ‘hippy crack’ – is normally bought in pressured canisters, commonly transferred to a container, e.g. a balloon, from which the gas is inhaled.

Although possession of laughing gas is not illegal, English law prohibits its sale to under-18s if there is a chance they will inhale it.

Smaller nitrous oxide canisters – which are legitimately used in the catering industry – have been widely used for recreational drug-taking for at least a decade.

The small, silver cartridges contain four litres of the colourless gas, but the larger types – which cost just £25 – can hold between 322 litres and 5,500 litres.

Large canisters have become commonly littered in British streets in the last year. For example, the clear-up after Notting Hill Carnival in London over the August Bank Holiday filled four skips with empty canisters.

Amid mounting concerns, the Government’s Advisory Council on the Misuse of Drugs was asked to review the harm caused by the drug last autumn. It has yet to report.

In August, medics warned that as the substance’s popularity has skyrocketed, so have cases of spinal cord and nerve damage, including paralysis.

Dr Mark Ellul, a specialist registrar in neurology in Liverpool, claimed youngsters are coming into hospital with ‘severe and long-lasting’ damage after using the drug.

Nos can starve the body of a crucial vitamin and oxygen, which can lead to life-changing nerve damage and suffocation.

Official figures show the number of young people in England and Wales using the drug has soared 50 per cent in the last decade.

At least 45 people have died after taking the drug since 2010, with many more hospitalised.

Dr Nikos Evangelou, a neurologist at Nottingham University Hospital, tweeted that there is an ‘epidemic’ of spinal cord and nerve damage due to nitric oxide. ‘Terrifying to see paralysed young people from laughing gas canisters,’ he said. 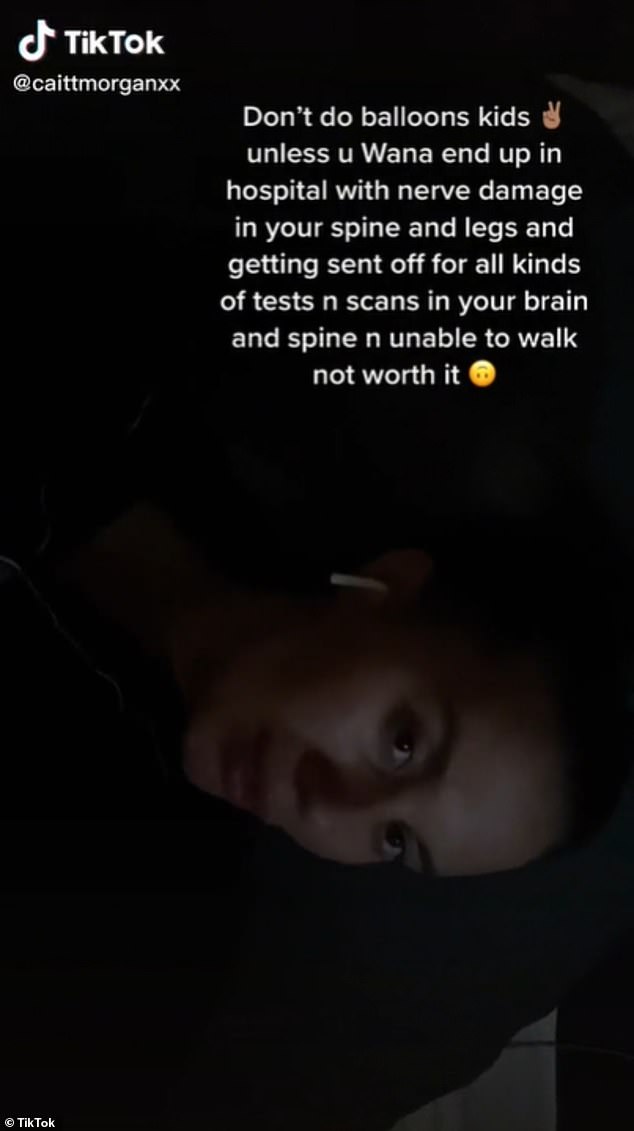 According to the European Union drugs monitoring agency EMCDDA, the recreational use of nitrous oxide is on the rise in Europe among young people, producing worrying numbers of poisonings. Pictured, a woman on TikTok warns of the risks of doing ‘balloons’

Dr David Nicholl, a consultant neurologist at University Hospital in Birmingham, took to TikTok to share concern about the ‘epidemic’.

A drug known as ‘hippy crack’ is to be banned in the Netherlands in a world first.

From January, the gas nitrous oxide will be illegal to buy, sell or own except for legitimate uses in medicine and catering.

In the UK it is the second most commonly misused substance after cannabis among 16 to 24-year-olds, but only possession with intent to supply is currently illegal.

The Home Office is considering a stricter ban. Inhaling the gas can induce heart attacks, fainting, nerve damage, vitamin deficiency, anaemia and weakness in the legs.

Dutch road safety campaigners say it has also played a role in 1,800 accidents across the country over the past three years.

But they then empty the gas – known in Dutch slang as ‘nang’ – into balloons and inhale it.

‘This stuff is dangerous. Seven years ago, this was a neurological rarity, even a couple of years ago I was seeing cases maybe once a month, now I’m seeing them every week,’ he said.

Dr Nicholl urged medics to ask young patients with unexplained neurological symptoms whether they use nitrous oxide and where they get it, so suppliers can be reported.

He called for the age limit for buying nitrous oxide canisters — which cost just £25 compared to £50 a year ago — to rise to 25.

Dr Ellul told The Guardian that his team now treats one case every few weeks. He said: ‘Most are young people, and many were previously unaware that the substance could be harmful. In some cases the effects can be quite severe and long lasting.’

The ‘high’ kicks in immediately, causing users to feel dizzy, relaxed and giggly, and lasts one to two minutes, on average.

Having too much, however, can make users faint or suffocate due to a lack of oxygen to the brain if they inhale highly concentrated forms of the gas.

Heavy and regular use can cause a vitamin B12 deficiency and anaemia. B12 is essential in the body’s production of myelin — the fatty sheath around nerves in the body.

A lack of myelin can trigger nerve damage, leading users to suffer painful tingling and numbness in their fingers and toes that makes walking difficult, as well as spinal cord damage.

In June, a 16-year-old boy almost died after taking laughing gas at Parklife festival, in Heaton Park, Manchester caused his lung to burst.

Alex Littler, from Ellesmere Port, Cheshire, was rushed to hospital after complaining of a swollen neck, breathlessness and that his chest felt like ‘popping bubble wrap’.

The year 11 student confessed to doctors and that he’d inhaled nitrous oxide while at the festival on June 11 and 12. He was diagnosed with a ruptured and leaking lung and told he was lucky to be alive.