A cyclist who collided with a car at an intersection and went flying into the air miraculously survived without any serious injuries.

Cairns man Steve Robertshaw was crossing a busy road in May when a small red hatchback turned into his path.

Dramatic dashcam footage from a vehicle stopped at the light captured the moment Mr Robertshaw slammed into the turning car’s bonnet before hitting the road hard.

The force of the impact broke his leg and wrist and left him in agony.

Mr Robersthaw spoke with Seven News and said police told him he was lucky to have avoided more serious injuries.

‘Even the police said, “Go and buy a Golden Casket (lottery) ticket, mate. We can’t believe you walked away from that”,’ he said.

Mr Robertshaw said he saw the car turning into the intersection but had right of way so continued to ride through.

‘Unfortunately, she accelerated around the corner. There was not much I could do. I kind of cartwheeled over the car. The bike got elevated to the top of the traffic lights.’ he said.

The cyclist had to spend two days in hospital with his injuries before he was discharged and allowed to return home.

Mr Robertshaw said he wanted the incident to be a reminder to motorists to be careful of cyclists on the road.

‘I think it’s a mentality thing … I think people have got to realise you can’t go around killing cyclists,’ he said. 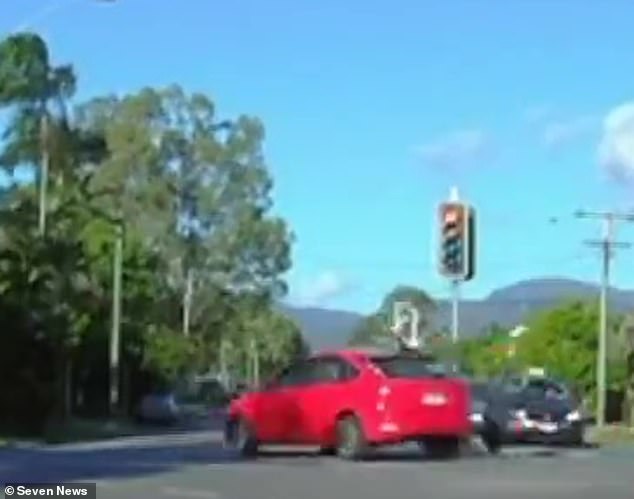