This is the terrifying moment a car speeds towards oncoming traffic on a busy Sydney motorway.

A silver sedan is seen racing past trucks and weaving in and out of traffic on the M5 in Milperra in Sydney’s south west, in footage that emerged this week.

In a video uploaded to Snapchat, the car is seen on the wrong side of the concrete barrier.

The driver doesn’t seem to worry, as they move past a truck and continue down the six lane highway.

Sitting in the farthest lane, the car then continues straight on and driving into traffic coming in the opposite direction.

It continues to weave in and out of traffic while it travels down the shoulder of the motorway, before turning around and driving int he right direction.

NSW Police Chief Inspector Phil Brooks described the dangerous actions as a ‘social media stunt’ which could have been catastrophic, The Daily Telegraph reported.

‘(This is) what appears to be a social media stunt. This is a number of road users taking risks to try and make themselves popular on Facebook,’ Mr Brooks said.

‘You’ve got two drivers that are driving at high speed, one operating a mobile phone whilst driving, the other driving in the breakdown lane going up the wrong way along the M5.

‘The outcome of this could have been quite catastrophic.’

Authorities are urging anyone who witnessed the incident or could identify the driver to contact police immediately.

They’re also on the lookout for the driver who filmed the act, as they were illegally using their phone while driving. 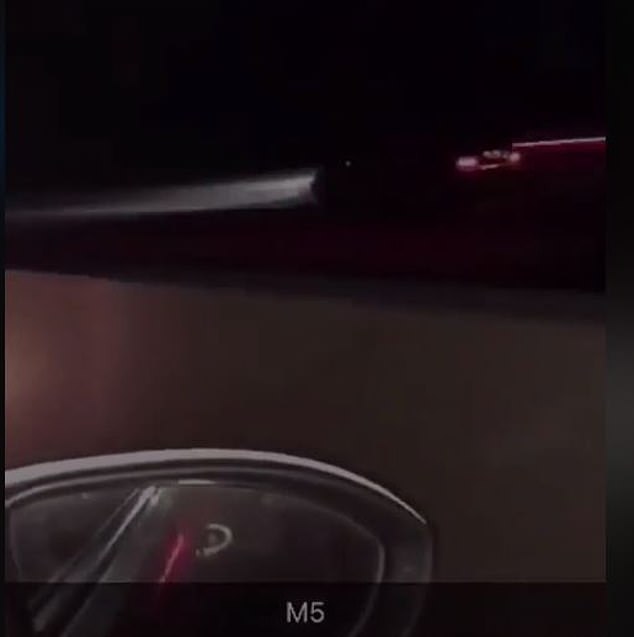 The video has been viewed more than 10,000 times and has garnered attention on social media, with many worried that the driver was putting other people’s lives at risk.

‘This is not cool or funny! People want to risk there own life fine, dnt (sic) do it at someone else’s expense,’ one Facebook user wrote.

‘Running a mock.. or more like the driver is digging his own grave,’ another person commented.

Other people are bewildered the driver wasn’t caught by police, especially since double demerits are in place state-wide.

‘Did he forget it’s still double demerits in Sydney,’ one user commented.

New South Wales Police are aware of the video and have been investigating the incident, but aren’t aware why the car was travelling on the wrong side of the road.