Larmand (above) who shot the drone footage, said he spotted three sharks that evening

Drone footage shows a group of surfers who appear to be oblivious they are surrounded by several great white sharks at Capistrano Beach in California.

‘They seem to not realize that there were several great white sharks in the immediate area,’ he said.

The footage shows the men performing several high-speed maneuvers as they inch closer to the predators without realizing it.

One of the men on an electric surfboard nearly hits a nearby shark in one section. And in another terrifying moment, another surfer falls into the water within inches of the sharks. 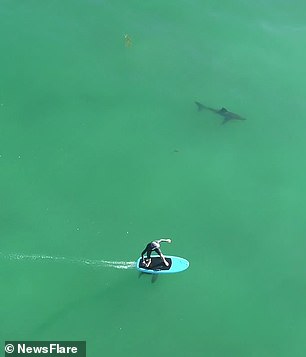 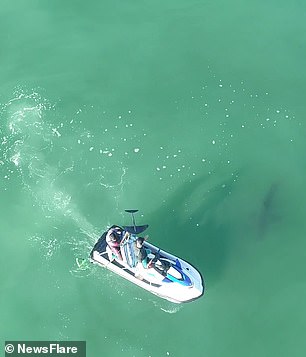 At other times while surfing, the performers (left) seemed not to notice how close the great white sharks had got to them. Only an hour into the performances did one on a jet ski finally spot the shark (right), which at this point was only several feet away

Larmand later wrote on his Facebook page that he had seen three great white sharks within a quarter mile of each other that night alone.

They continued to fool around on a jet ski and two eFoil electric surfboards.

Larmand added that the group only seemed to realize they had ‘some company’ a long while after, illustrated in the video when one points into the water.

He wrote: ‘[These] guys had no idea that they had some company out there this evening! Anyone wanna join them?

‘After about an hour one of them finally sees it, but not until it’s about a foot away!’

One person asked if the shark was hurt, after it appeared to have been clipped by an electric surfboard.

Larmand replied adding how equally surprised and shocked he was that nothing terrible had happened.

He replied: ‘Went right over the top of the shark, I don’t believe he hit the shark but the shark was definitely startled.’ 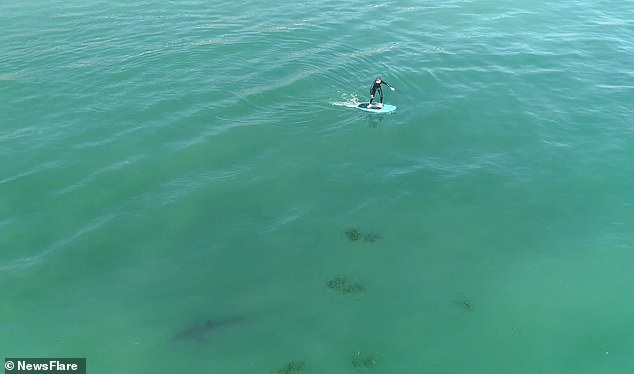 That figure is 200 sightings higher, approximately double, the amount recorded in the 1990s.