This is the horrifying moment a man stands over his bloodied victim after stabbing him with a machete in the center of Barcelona.

The shocking clip, which was uploaded to Twitter on Friday morning, shows a man waving around a large knife in a deserted street in the city’s Raval district.

His victim can be heard screaming and sobbing as he lies in a pool of his own blood.

Footage filmed from the first floor window of the house above shows the barefoot attacker marching up and down the street wearing only a pair of shorts.

At one point he seems to walk away before walking back and threatening the injured man once more to taunt him – holding the enormous knife just inches from his face.

It is not clear how severe the injuries sustained by the victim are, or whether Spanish police have been able to arrest the attacker.

According to information posted alongside the clip on Twitter by user Anna Punsi, Barcelona’s local police have identified the assailant. 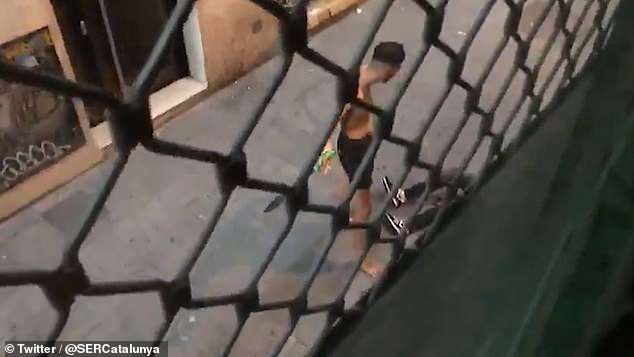 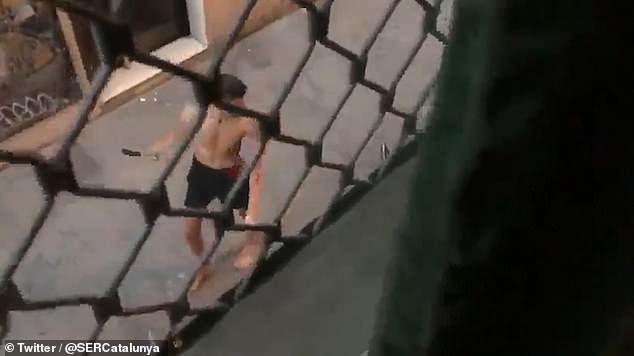 Ms Punsi also said the victim had received ‘serious injuries’ to his legs during the brutal stabbing attack.

The stabbing was said to have been the second stabbing in the same street in just nine days.

According to Ms Punsi, both the victim and attacker are thought to be of North African origin since they can be heard screaming in Arabic during the clip.

‘Victim and assailant are of Maghrebi origin,’ She wrote on Twitter.

‘The victim pleads in Arabic not to kill, cries and invokes his mother and God thinking that the other wants to end his life.’