Five men in hoodies, masks and gloves tried to trick a homeowner into letting them in so they could rob their house by pretending to be ‘a random kid’ and pleading for help.

Frightening security footage showed the group of thugs lurking around their target’s house on a quiet street in Tarneit, in Melbourne’s west, at 11pm on Tuesday.

When the leader knocked on the front door, the owner could be heard asking, ‘Who’s there?’

Pictured: A man in a face mask, black hoodie and gloves tries to trick a man into opening his front door

‘I need help,’ the man replied, without a sense of urgency.

‘Who’s there?’ the owner asked again.

The would-be thief then changed his tactic and, in a deep voice, said: ‘It’s a random kid, I need help.’

‘What?’ the owner asked, clearly baffled by response.

‘I need help,’ the thug repeated.

The owner was not fooled by the charade and said, ‘I’m calling the cops, mate.’

When the hooded man realised his plan was not going work, he backed away.

Pictured: The group of five men surrounded the home in Melbourne’s west and tried to get inside 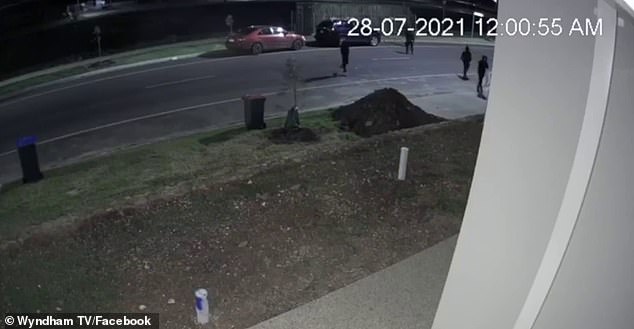 Pictured: The men came back to the house after an hour and surrounded it again

But other footage showed the group emerge from the shadows from across the road an hour later at midnight.

They carefully crept around the house again – one man attempting to hide by ducking behind a garden wall – before running off together moments later.

According to a local Facebook group, the incident was reported to police.

Victoria Police was unable to comment when contacted by Daily Mail Australia.

The video was shared on social media to warn others in the small suburb to be on alert. 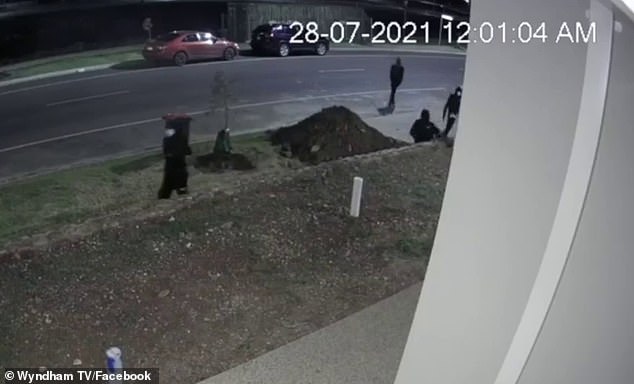 Social media users congratulated the homeowner for standing his ground and refusing to open the front door (pictured: the men surrounding the house)

‘Good on you for not opening the door,’ one user commented. ‘Very smart.’

‘Omg this is so scary it’s always important to lock the doors,’ another wrote.

But others laughed at the gutless hooded man’s attempt at tricking someone into thinking he was a child.

‘Seriously, “it’s a random kid” comment. Okay, let me not open the door,’ another laughed.