This is the terrifying moment a van driver lost control of his vehicle on black ice and crashed head-on into a family travelling in the opposite direction with a three-year-old girl sleeping in the back.

The shocking crash took place on an unnamed road near Newmiln in Perthshire, Scotland on December 23 at 4.03pm.

Grant Donaldson was driving partner Louise Thomson, 38, and their three-year-old daughter Sophie home to the village of Tibbermore, Scotland when the van approached and smashed headfirst into them.

Despite the horrific crash, nobody was seriously injured.

Mr Donaldson, 44, says that he is releasing the footage to highlight the dangers of driving in icy conditions.

The van came around the right-hand bend in the middle of the road, at which point the driver lost control and his vehicle slid sideways.

He seemed to wrestle control back but it was too late and he could only watch on in horror as he smashed into the silver Range Rover.

Sophie, three, woke up screaming immediately in the back of the car with her parents rushing out to check on her,

She was later checked over by doctors at Nine Wells Hospital in Dundee, and apart from some bruising from the car seat harness she was uninjured.

Mr Donaldson injured his neck and back, and Ms Thomson had a bruised chest and knees, sore neck and compressed vertebrae in her spine.

The van driver appeared from around the bend and seemed to lose control of the vehicle on the icy road in Perthshire, Scotland 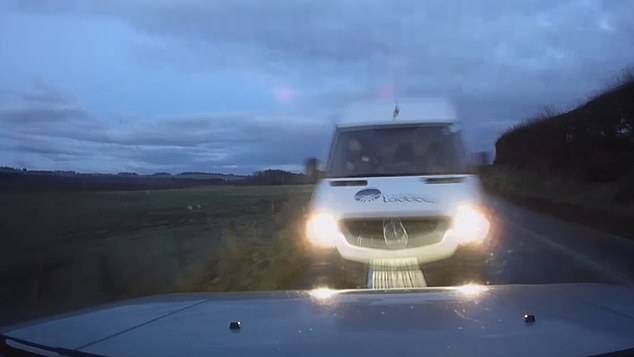 Ms Thomson posted an update on Facebook later in the evening: ‘Just home from Ninewells, all ok!

‘Sophie’s fine, some marks from the car seat harness but nothing to worry about.

‘Grants got a sore head, back and neck. I’ve ended up with bruised chest and knees, sore neck and compressed vertebrae in my spine – I’ve lost height and my car!’

Speaking today Mr Donaldson said: ‘The road was very icy with black ice, I never drove above 35mph as it was too dangerous to go any faster. 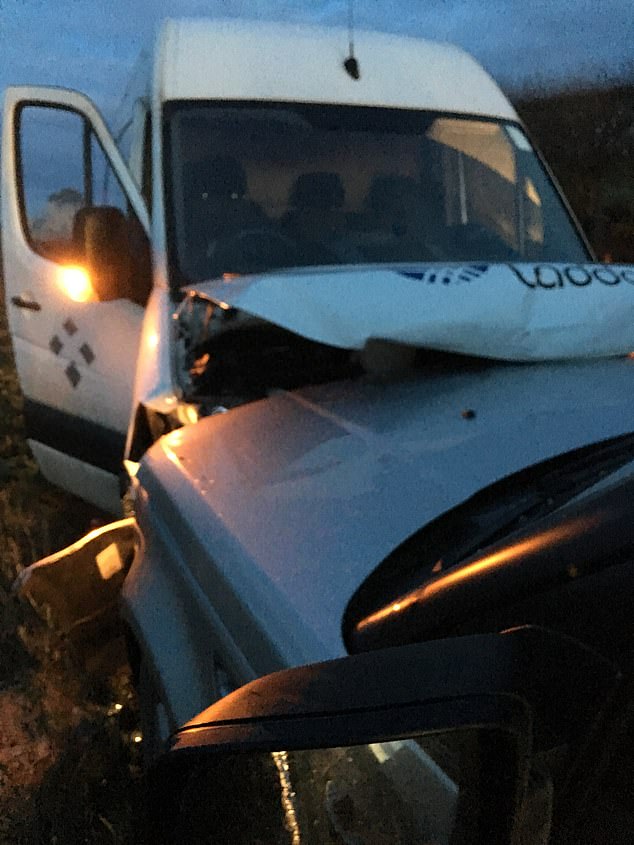 He crashed head-on with the family’s silver Land Rover, which had a three-year-old girl sleeping in the back

‘We had already driven on the road earlier in the afternoon and saw a van on its roof in a field – so I knew the road was treacherous.

‘The van driver denied speeding, he said it wasn’t his fault and wasn’t aware the road was icy. Once he realised the incident had been recorded on dash cam, he refused to talk to us.’

Ms Thomson later told the Scottish Sun: ‘We were travelling home and the van came round the bend really fast, started going sideways then just smashed head-on to us.

‘He said he didn’t realise the road was icy. Our three-year-old daughter was sound asleep in her car seat in the back. 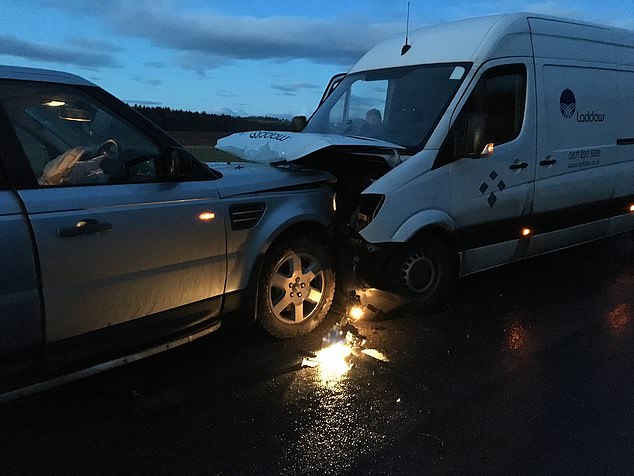 Incredibly, despite the terrifying head-on impact, nobody was seriously injured in the collision

‘She is okay just got a fright with the impact and noise.’

Edmund King, AA president, said: ‘The lesson in this frighting footage is that road conditions can be treacherous even when they look tranquil.

‘When temperatures drop below freezing you don’t need snow and visible ice to make the roads dangerous.

‘All drivers should drive to the conditions and that often means driving well below the speed limit to compensate for the weather and type of road. You don’t need snow for drivers to go slow.’

A spokesman for Police Scotland said: ‘Police Scotland attended a 2-vehicle road traffic collision on the unclassified road between Madderty and Tibbermore shortly after 4pm on Sunday 23rd December.

‘Although some of the persons involved were taken to hospital, there were no serious injuries.’