A grief stricken mother has described how a blaze ravaged her Texas home, killing her three ‘amazing’ children and their grandmother after they lit a fire to keep warm during the storm.

Olivia, Edison and Colette Nguyen and their 75-year-old grandmother Le Loan died in the early hours of Tuesday morning at their Sugar Land home during the statewide blackouts and water outages.

Authorities are still investigating how the fire started. They say the family had been using their downstairs fireplace to keep warm but it is unclear yet if that was the source of the blaze.

She has since recalled the last moments she can remember about the tragic night and how she was trapped downstairs during the fire screaming her children’s names.

Jackie Nguyen’s three children – Olivia, Edison and Colette Nguyen – and their grandmother Le Loan, 75, died in a fire last week that was lit to keep them warm amidst the Texas blackouts. Pictured: Jackie Nguyen, with burns on her face, on February 21, 2021 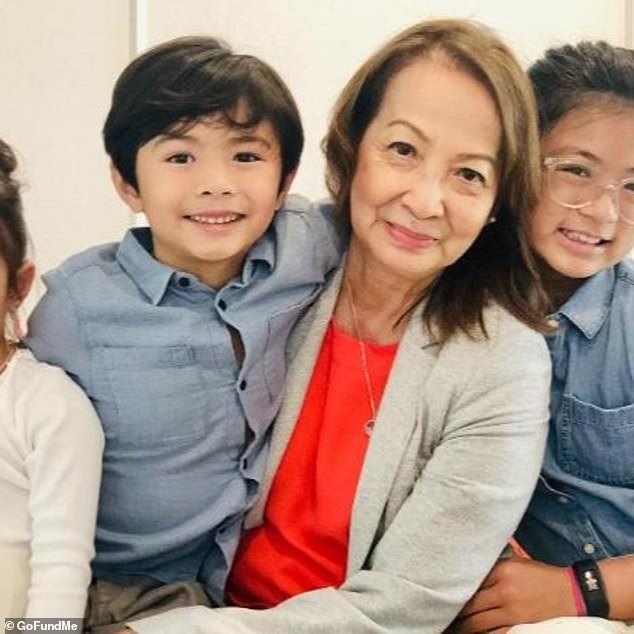 Her mother Le, the children’s grandmother (pictured with the three children), had always taken care of them, Nguyen said, often picking them up from school and their various activities to help her daughter further her career in finance

The young family are among the victims of the storm that also claimed the life of 11-year-old Cristian Pavon who froze to death in his home. Texas Senator Ted Cruz has been heavily criticized after it emerged he fled to Mexico as those in his state were dying.

The tragic ordeal involving the Nguyen family unfolded last week after the children’s grandmother Loan Le lost power at her home in the Houston suburb of Sugar Land on Monday.

She went over to her daughter’s house around five miles away where Nguyen and her three children still had power.

‘We thought we were really lucky because we still had power until the early evening,’ Nguyen said.

But their power soon went out as well.

The family hunkered down for the night, lighting the fireplace and playing board games and card games.

At around 9.30 p.m., her eight-year-old son Edison went to his 11-year-old sister’s room, which had bunk beds, while their grandmother planned to sleep with the youngest of the children, five-year-old Colette. Nguyen went to her room.

The next thing Nguyen says she can remember properly is waking up in hospital.

‘Tucked my kids into bed and really the next thing I know I’m in the hospital,’ Nguyen told CNN. ‘A few hours later the fireman and police officer came and said that no one else made it.’

Sugar Land firefighters responded to the fire at around 2 a.m. after a neighbor saw the family’s home up in flames, according to Doug Adolph, a city and department spokesman. 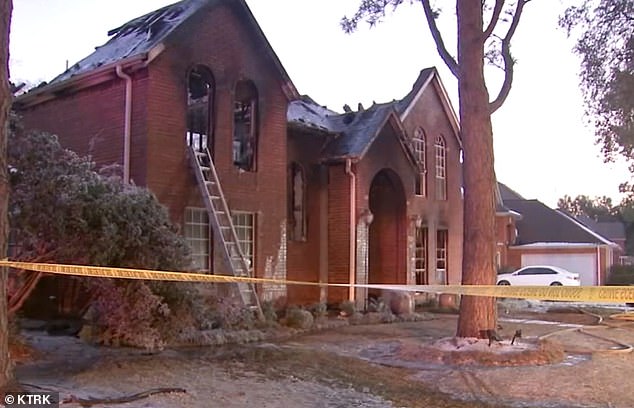 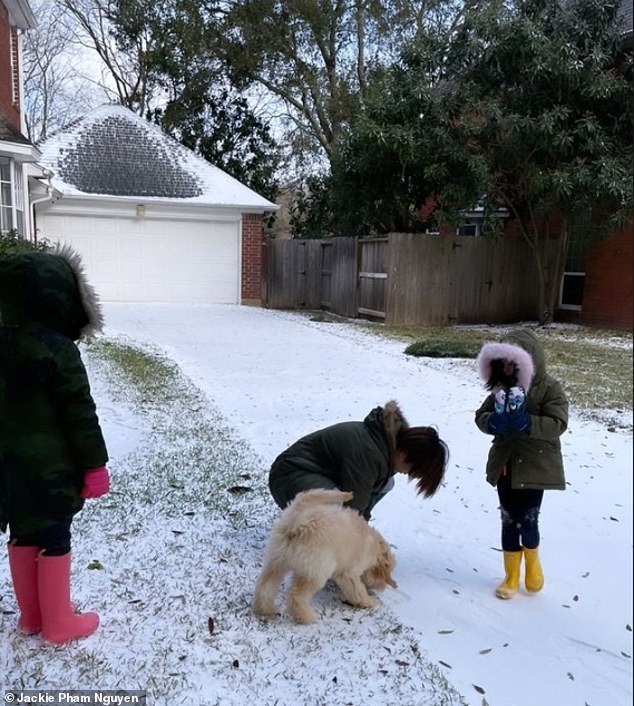 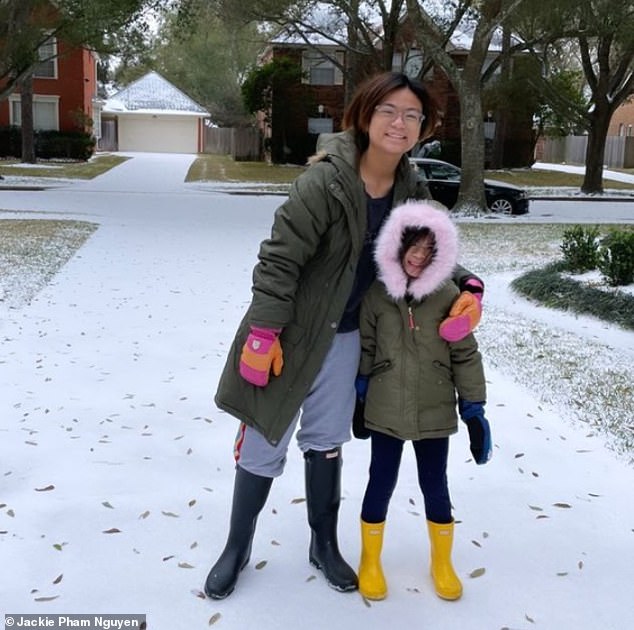 Authorities are still investigating how the fire started. Nguyen’s two daughters are pictured outside their home six days ago

She recalls being on the first floor of the house where her bedroom was but was unable to get upstairs to her children.

Nguyen said she screaming their names hoping they would appear.

‘I just remember feeling like it was so dark and I can still kind of hear everything crackling around me.’

Adolph said that the mother of three ‘had to be physically restrained from running back into the house’, and that it took nearly and hour to get the fire under control.

He also said there were no updates on the on-going investigation into the cause of the fire nearly a week later, only saying the family had been trying to keep warm with a fire place based of posts on their social media accounts.

‘We can’t say for sure that was the cause of the fire. We just don’t know yet,’ he explained. ‘It’s possible that the investigation may never identify an exact cause.’

‘Obviously they were trying to stay warm,’ Adolph said at the time. ‘We can’t say that’s what the cause was, we just think we know they were using a fireplace.’

The neighborhood had been without power for at least eight hours, Adolph said.

The three children and their grandmother died. Nguyen and a friend were taken to hospital having suffered injuries including smoke inhalation and burns.

‘My heart is broken, I’m never gonna be the same. ‘I’m in this crisis tactical mode now and I’m just really focused on all this final arrangements because this is the last sort of thing I’m going to do for my kids,’ the grieving mother said.

‘My kids were such phenomenal, amazing, little badass humans,’ saying that Olivia and Colette – who the family called Coco – would have celebrated back-to-back birthdays on March 27 and 28.

‘Colette is just a little firecracker and she has so much charisma,’ Nguyen told the network. ‘She also, as a 5-year-old, had that level of confidence. She was never afraid, totally unapologetic, not intimidated.’

Edison, Nguyen’s middle child, was a ‘sweet boy’ with a flair for art and an interest in architecture, while, she said, her daughter was mature and ‘ahead of her peers.’ 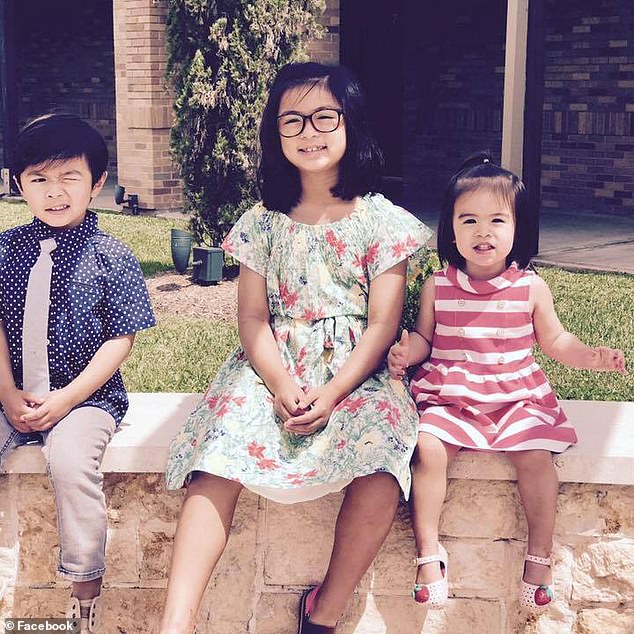 Olivia, center, Edison, left,  and Colette, right, Nguyen and their grandmother Le Loan, 75, died in the early hours of Tuesday morning during the blackouts 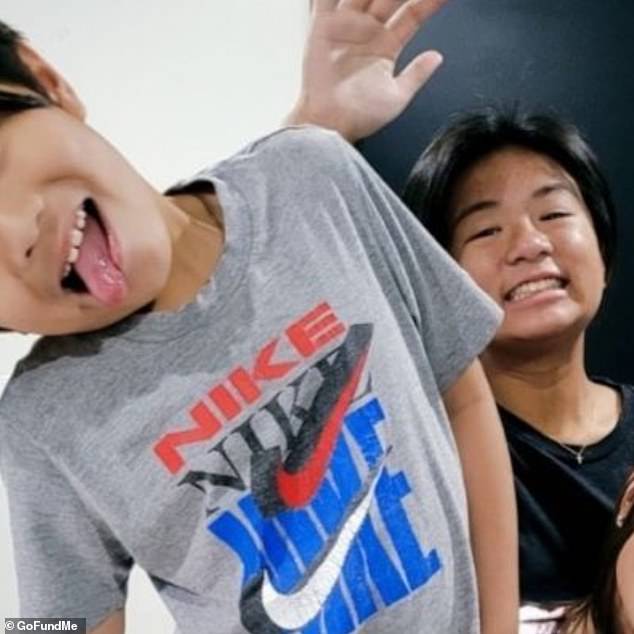 Firefighters were called out around 2 am and tackled the blaze but the four victims were confirmed dead. The children’s mom Jackie Nguyen and a friend were also injured and taken to hospital

Her mother Le, the children’s grandmother, had always taken care of them, Nguyen said, often picking them up from school and their various activities to help her daughter further her career in finance.

Le had arrived in Kansas as a refugee from Vietnam with nothing, and Nguyen credits her for sacrificing to give her a better life.

‘My parents did everything for their kids, like, as immigrants, and coming to this country and then, that love that they gave me, it was tenfold when it came to the grandkids,’ Nguyen said. ‘I think grandmas are unsung heroes and untold stories.’

A GoFundMe page for the children had already raised over $300,000 with donations still coming in a week after the tragedy.

Other family of the three young children had previously hit out at officials ‘who should have been prepared’ for the Texas storm.

The children’s aunt, Vanessa Kon, told The Daily Beast: ‘We don’t know what happened. We don’t know why the lights went out like that. The city should have been prepared for it. Why was the power off? If the power wasn’t off, this wouldn’t have happened.’

The children’s father, Nathan Nguyen, is separated from Jackie and he lived elsewhere.

Kon’s comments come as Joe Biden’s press secretary on Sunday confirmed the president may visit Texas ‘as soon as this week’.

Jen Psaki said the president is ‘eager’ to help but added: ‘He’s also very mindful of the fact that it’s not a light footprint for a president to travel to a disaster area. He does not want to take away resources or attention.

‘And we’re going to do that at an appropriate time in coordination with people on the ground​. C​ould be as soon as this week.’

Biden had declared a major disaster in the state where 14million were without water at one point with towns cut off from the electricity grid for seven days.

The move – announced on Saturday – makes federal funding available to individuals across the state, including assistance for temporary housing, home repairs and low-cost loans for losses on uninsured property. 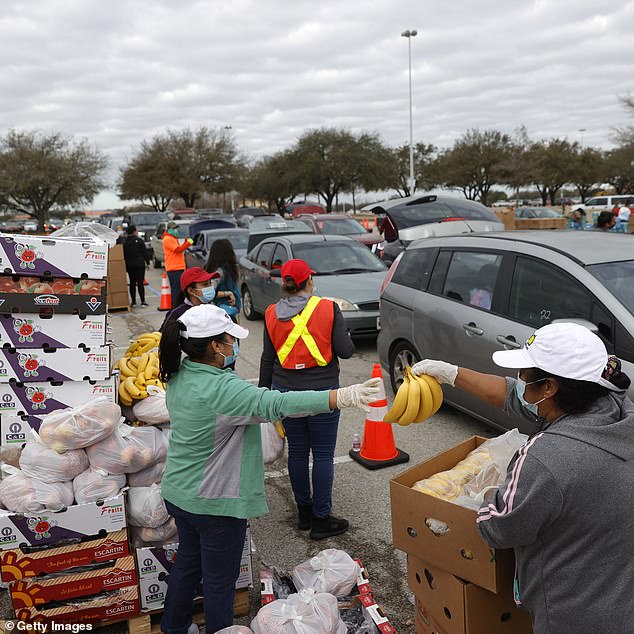 Volunteers prepare to load food into cars during the Houston Food Bank food distribution at NRG Stadium on Sunday. Thousands of people lined up to receive food and water at a mass distribution site for Houston residents who are still without running water and electricity following winter storm Uri 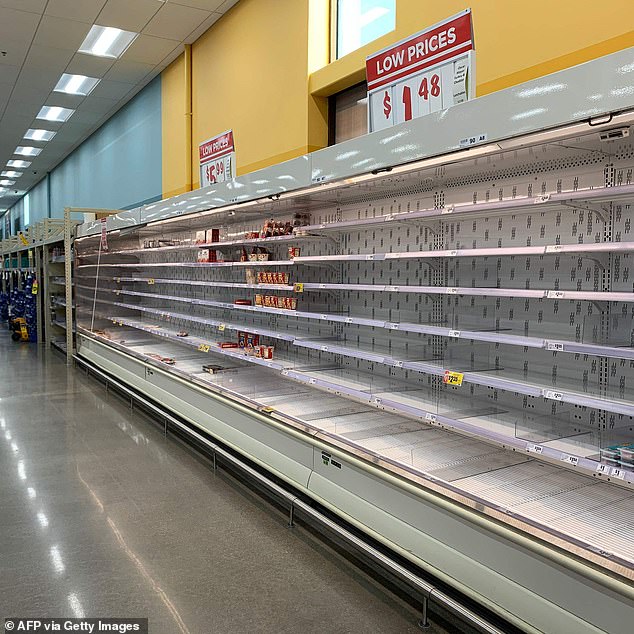 Shoppers are seen wandering next to near empty shelves in a supermarket in Houston, Texas following winter storm Uri on Saturday 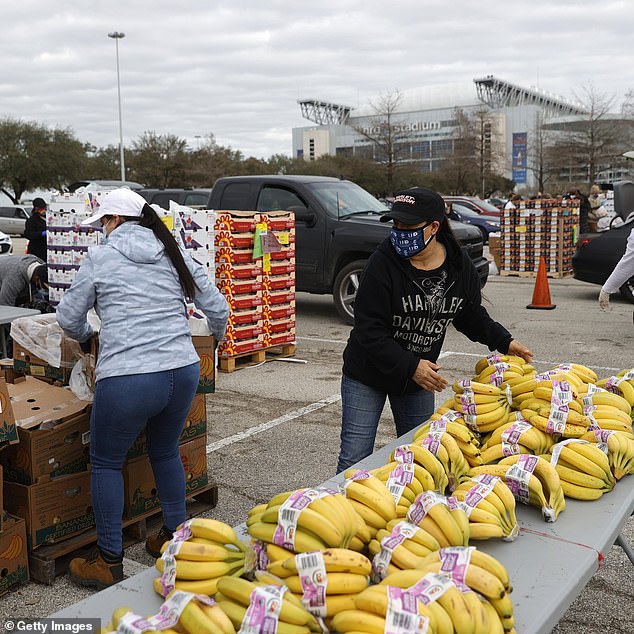 The Houston Food Bank is pictured Sunday. Joe Biden’s press secretary on Sunday confirmed the president may visit Texas ‘as soon as this week’

At least 30 lives have been lost in the Lone Star state amid the storm.

Other victims of the crisis include 11-year-old Cristian Pavon, who perished of hypothermia in his family’s mobile home in Conroe, near Houston, a day after he was pictured enjoying the snow – the first he had ever seen in his life.

Another man reportedly froze to death in his recliner chair with his ‘nearly dead’ wife by his side and a mother and daughter died from carbon monoxide poisoning as they bundled in their car in a garage.

Texas is the only state in the continental United States with an independent and isolated grid. That allows the state to avoid federal regulation – but also severely limits its ability to draw emergency power from other grids.

ERCOT, which operates the grid, saw 4.5 million of their customers without power during the cold snap.

Texas had experienced a similar, though less severe, disruption during a 2011 cold snap. Still, Texas power producers failed to adequately winter-proof their systems. 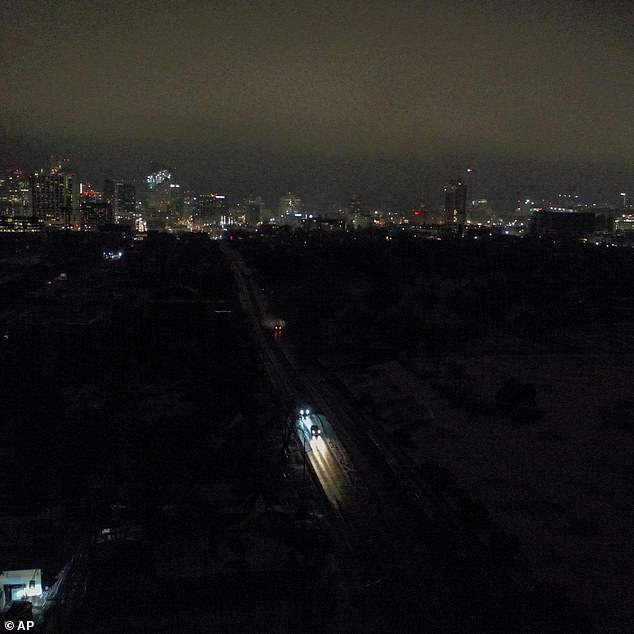 Before dawn on Monday, the state’s grid operator was ‘seconds and minutes’ away from an uncontrolled blackout for its 26 million customers, ERCOT CEO Bill Magness has said.

More than 14.5 million Texans endured a related water-supply crisis as pipes froze and burst. About 65,000 customers remained without power as of Saturday afternoon, even as temperatures started to rise, according to website PowerOutage.US.

Senator Ted Cruz has been mocked for sharing photos of himself handing out bottled water in a ‘shameless’ photo-op just days after he jetted off to Cancun with his family.

Late on Saturday night Cruz posted a series of pictures of himself on Twitter showing him delivering water to those in need together with the hashtag #TexasStrong.

The senator was forced to return from his Mexican beach resort vacation while millions of fellow Texans were left dealing with horrendous conditions.

At one hospital, workers stood outside to collect rainwater. Others stood in line at a running tap in a park. A mother of three took her children to shelter in a furniture store after she could see her breath forming in the family´s trailer. University professors fundraised so their students could afford meals. 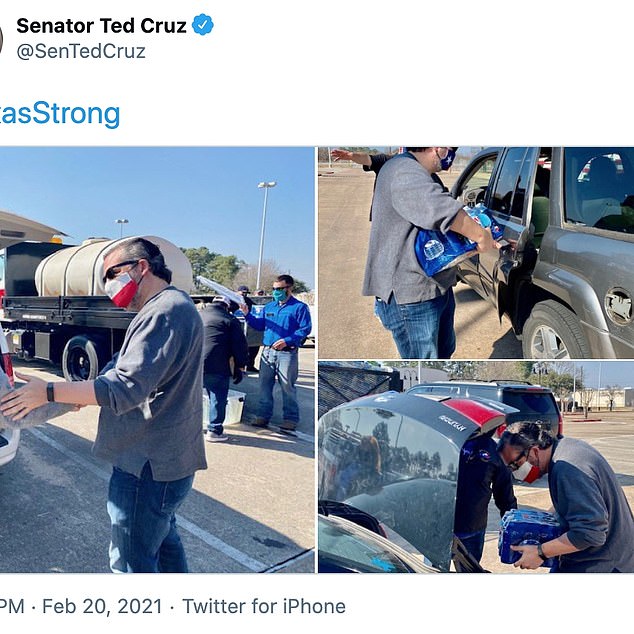 Senator Ted Cruz tweeted a photo op late on Saturday night with the hashtag #TexasStrong. It only served to generate further anger online from those furious at the senator’s recent behavior that saw him leave Texas for the beach in the midst of a crisis 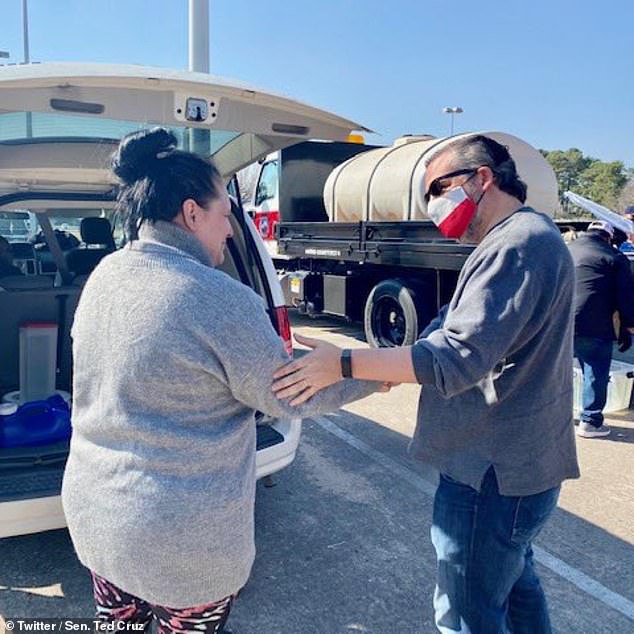 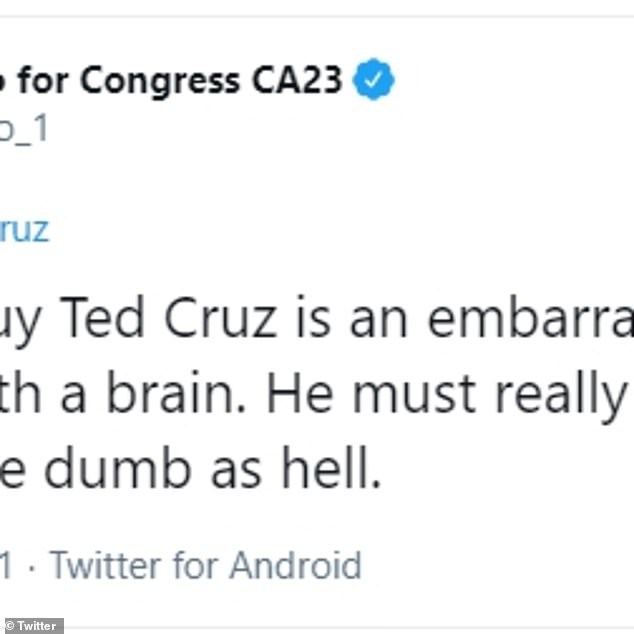 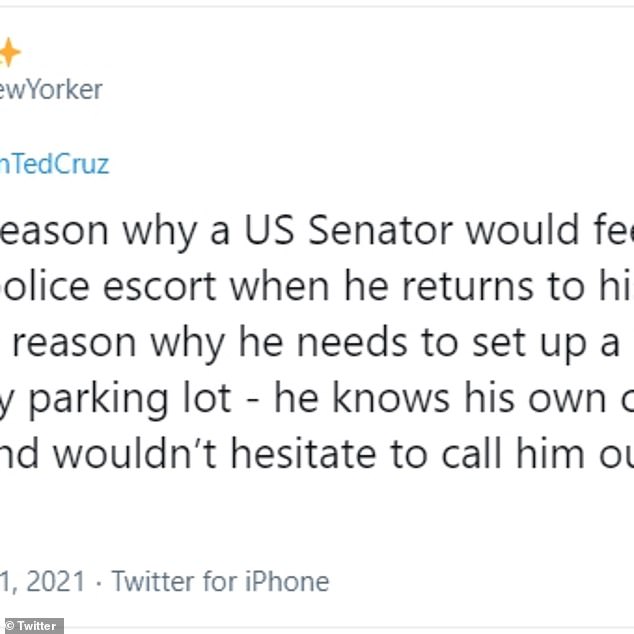 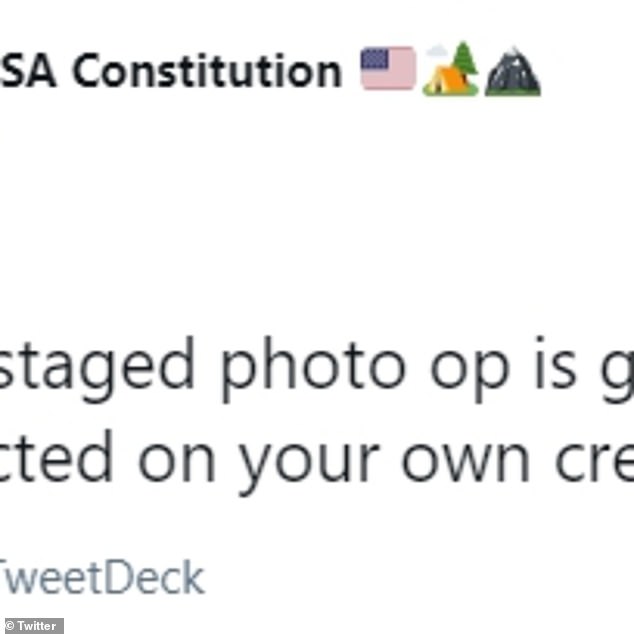 The state´s Republican leadership has been blamed for ignoring warnings that winter could wreak the havoc that it did, and for not providing local officials with enough information to protect residents now.

Things got worse Tuesday; by Wednesday, some started to get their power back, but a new shortage emerged – drinkable water.

Frozen pipes burst across the state. And the water that did come out of taps was often undrinkable due to dangerously low water pressure levels. At one point, an estimated 13 million people were under a boil-water order, nearly half of Texas´ population.

At week´s end, as the cold weather began to loosen its grip, the power came back for most Texans.

But the effects linger: Some Texans on variable-rate power contracts faced electric bills in the thousands of dollars, leading the governor to hold an emergency meeting Saturday with lawmakers. 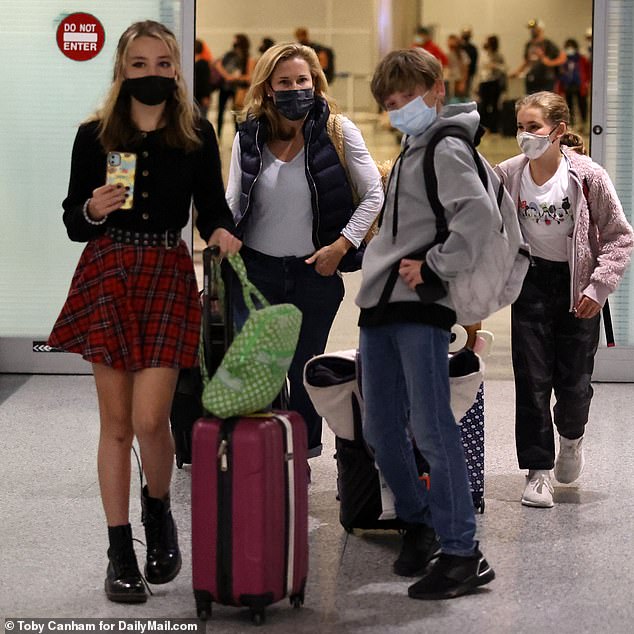 As Heidi marched out of the Houston airport with her kids and an unidentified boy – all of whom were wearing masks – at 6pm on Saturday night, DailyMail.com asked her several questions, all of which she refused to answer 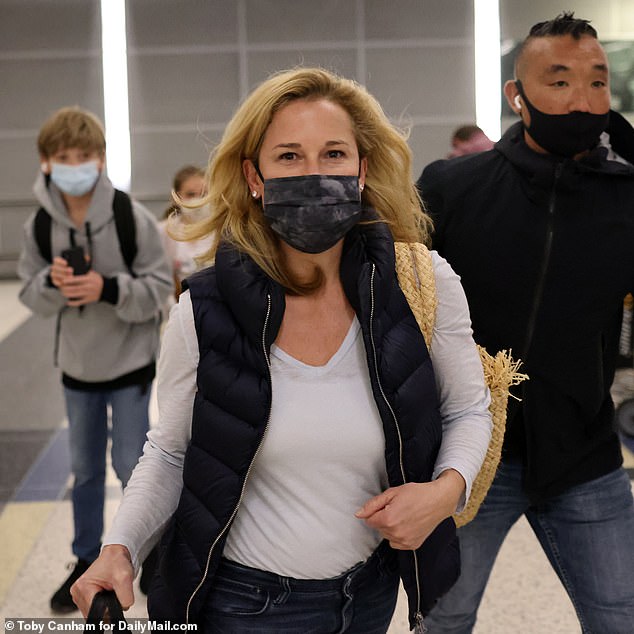 Heidi Cruz wife of Texas Senator Ted Cruz arrives back in Houston from Cancun, Mexico with her children in tow