Texas boy, 12, finds both his parents dead in their trailer home in murder-suicide

Texas boy, 12, finds both his parents dead in their trailer home after his father shot his mother then killed himself in murder-suicide while retrieving belongings from their home

A 12-year-old boy found both his parents dead in a ‘horrible’ crime scene inside their trailer home on Thursday morning after his father shot his mother then turned the gun on himself in a murder-suicide while he and his three children were in a car outside.

Aidee Rueda, 33, was shot and killed by her husband at their home in San Antonio, Texas, on Thursday at around 8.30am.

According to police, she her 36-year-old husband – has not been named and he is not listed in property records related to their home – were arguing.

On Wednesday night, she and the kids stayed away from the home and she had only gone back to it on Thursday to retrieve some belongings.

Aidee Rueda, 33, was shot and killed by her husband at their home in San Antonio, Texas, on Thursday at around 8.30am. The scene is pictured after they were found

She asked a co-worker to accompany her and as she went into the trailer, the co-worker stayed with her children in the car.

When she failed to emerge after some time, the 12-year-old boy went inside to see what the hold up was.

He discovered what cops have now described as a ‘horrible, horrible’ scene.

‘For anybody to walk in and see that especially a child is horrifying. I’m not even going to describe it but it was a horrible, horrible scene and no one should have to witness that, especially a child,’ San Antonio Police Chief William McManus told KSAT.

He said that while authorities had never been called to the house before, the children have since told them that their parents fought often.

The other children are aged between five and 12. 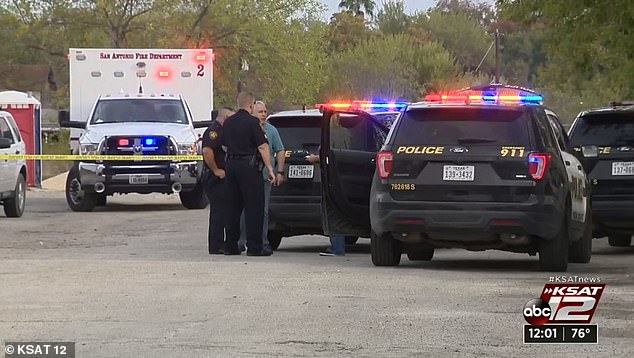 Police described it as a ‘horrible’, ‘horrible’ scene that the young boy walked into. He is now getting counseling