Texas boy without an immune system lives in isolation

A 10-month-old boy born without an immune system has been confined to his sanitized home his entire life and only leaves for doctor’s visits.

Sebastian Romero was diagnosed with severe combined immunodeficiency (SCID) at two weeks old, a rare genetic disorder known as ‘bubble boy’ disease that left him with no infection-fighting cells.

Exposure to any illnesses, including the common cold, could kill him due to his body’s inability to fight off disease. This means no family outings and Christmas this year was spent without visitors.

However, the once fatal disease has the possibility of life thanks to a bone-marrow transplant that Sebastian received earlier this year which has been slowly building his immune system.

His mother Blanca Romero, 33, told Daily Mail Online that the family-of-five shower and change clothes immediately when entering their Texas home and will continue to take these necessary safety precautions until his cell count is high enough that a cold won’t put him in the hospital. 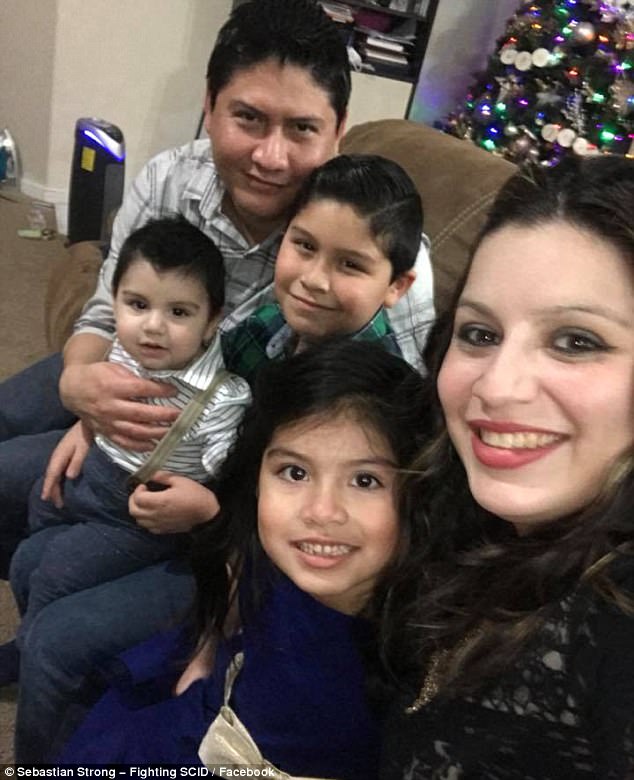 Their Texas home is completely sanitized and the older children, five and eight, must immediately shower and change their clothes when they come home from school

At just days old, Sebastian’s routine newborn testing revealed that his T and B cell count were abnormally low.

T and B cells are specialized defender cells that recognize germs and quickly multiply to fight infection.

After getting an emergency appointment with an immunologist, further blood testing revealed that he had SCID.

Severe combined immunodeficiency occurs in one out of every 40,000 – 75,000 births. Because it is due to a mutation in the X chromosome, the disease only occurs in boys but girls can be carriers.

According to the US Department of Health and Human Services, a normal T cell count should be between 500 and 1,200 per cubic millimeter of blood, but Sebastian had none.

Blanca said she and her husband Emil, 35, sanitized their entire home, putting five air filters around the house and converting the master suite into an isolation room.

For the first three months of Sebastian’s life, he and his mother lived in isolation while Emil took care of their two other children Kayla, five, and Abraham, eight.

‘We would FaceTime and that’s the only way I would see the kids. Sometimes they would crack the door and put facemasks on,’ she said.

Blanca would only leave the room to get food and avoid hugging and kissing her older children.

‘If they touched me I would go right into the shower,’ she said.

During this time, the couple had been talking with doctors about a bone marrow transplant for their son.

The transplant is the only known treatment for SCID.

It means sufferers are born without an immune system and cannot fight the simplest of infection – even the ‘common cold’ passed on by a mother’s kiss can be fatal.

The only way of keeping these children safe from infection is to care for them in a ‘bubble’, a high-tech sterile room.

They can survive if they have a bone marrow transplant, giving them a new immune system – however this can take up to two years and is not successful in all patients.

If a transplant fails to improve a sufferer’s immunity, their organs can become irreversibly damaged, which can be life-threatening.

Bone marrow is the soft tissue inside bones that makes blood-forming cells called stem cells which turn into white blood cells to fight infections, red blood cells to carry oxygen throughout the body and platelets to control bleeding.

After months of being on a donor list, Sebastian’s chances of a successful transplant began to decrease.

The mother-of-three was a match and donated her stem cells to Sebastian.

Before the transplant, the boy underwent 10 days of chemotherapy in order to wipe out any harmful blood cells to prepare for the new ones.

In that time he began losing his hair but Blanca said: ‘He’s always so smiley. Even throughout chemo – it would give me strength.’

Sebastian had a successful transplant in May and doctors said it may take two years for the cells to fully settle and completely build a new immune system.

Since then, Blanca said he has gone from producing zero T cells to 437 and now has 36 B cells as per his doctor’s visit last week.

She added that doctors want to see at least 600 T cells before considering letting him outside. 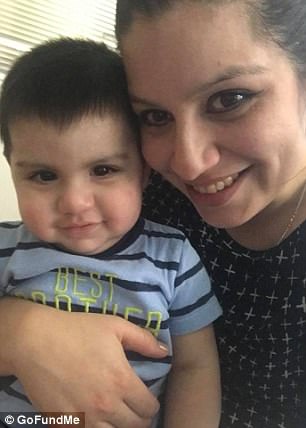 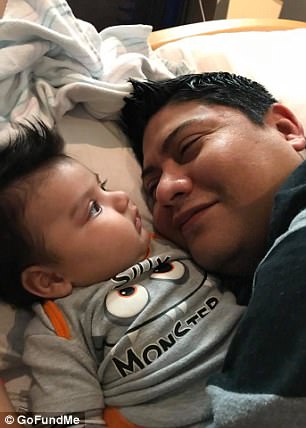 Mother Blanca Romero, 33, told Daily Mail Online that Sebastian is starting to develop infection-fighting cells after he received a bone marrow transplant in May 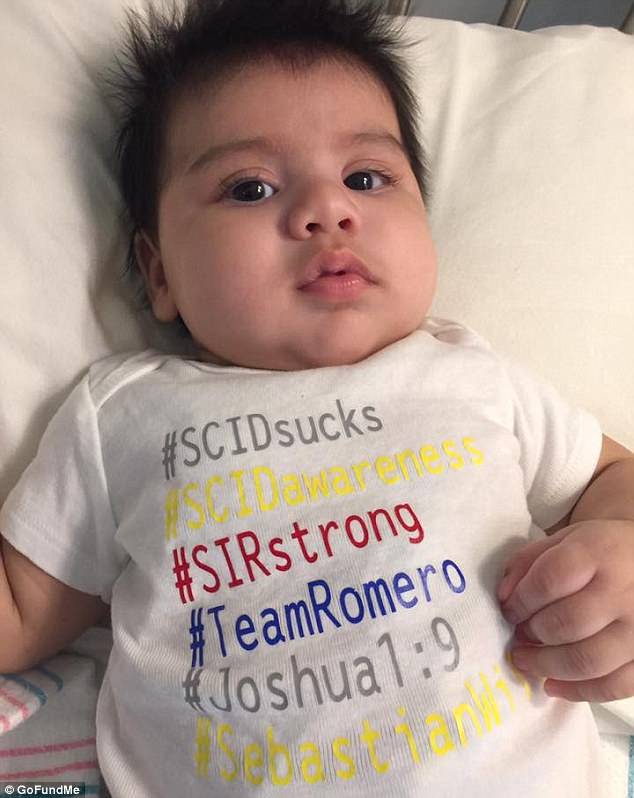 Since the bone marrow transplant, Sebastian has produced more than 400 T cells which will build his immune system and fight off infection

SCID became widely known during the 1970’s and 80’s, when David Vetter, a boy with SCID also from Texas, lived for 12 years in a plastic, germ-free bubble.

Vetter received a bone marrow transplant from his sister, but his body rejected it. He became ill with mononucleosis and died months later.

Blanca said that she and her husband would prefer to keep their son inside rather than run the risk of infection even with wearing a bubble.

‘Some families use a protective plastic cover over a stroller but I see every place that air can come in and it’s a risk,’ she said.

Last month Sebastian got sick and developed a phlegmy cough.

Blanca rushed him to the Texas Children’s Hospital where a blood test confirmed he had croup, a respiratory infection common in infants, but in SCID babies the infection can be deadly.

After a few weeks in the hospital Sebastian recovered which is a sign that his immune system is growing stronger to fight off harmful bacteria.

Now the family takes extra precaution to keep the youngest healthy by making their home a protective sanctuary.

‘When the kids come home they know they have to take off their clothes go straight to the bathroom to take a shower,’ Blanca said. ‘Then I’ll sanitize their backpacks and everything inside of it.’

She added that the older children’s teachers will email Blanca the homework for that night so she can throw away the papers that may carry any germs from the day.

Blanca has not worked since Sebastian was born and is planning to return to her job in supply chain in January.

‘He won’t be able to go to daycare because there’s too many germs,’ Blanca said.

Emil will stay home and care for Sebastian until his cell levels are high-enough.

With only one parent able to work at a time, the financial burden has been tough and the family has created a GoFundMe to cover medical expenses.

Sebastian takes a preventative antibiotic three times a week and will continue to take it until his body can fight off infection on its own.

Though he suffering from a rare disease, Blanca said that Sebastian is reaching milestones by crawling, playing with his siblings and is developing as any other baby would.