A Texas father-of-two who was once left paralyzed by a rare autoimmune disorder has overcome the odds to complete a half Ironman triathlon.

Trent Fielder, 44, from Burleson, was getting ready to drive home from work in 2011 when his feet couldn’t work the gas pedals anymore.

Just hours later, he was left paralyzed from the waist down.

Doctors at a hospital performed a CT scan and a spinal tap and discovered he had Guillain-Barré syndrome, a disorder in which the immune system attacks the peripheral nervous system, paralyzing parts of or – in some cases – the whole body.

Fielder spent years in physical therapy, training to gain back mobility in his upper back, core and legs.

In October 2018, nearly seven years after he was first left wheelchair-bound, Fielder finished the grueling half Ironman, a 70.3-mile race of swimming, bicycling and running.

He says he hopes to inspire others in a similar situation and to show that there is life after paralysis.

Trent Fielder, 44 (pictured before the half Ironman triathlon), from Burleson, Texas, was getting ready to drive home from work in December 2011 when his feet couldn’t work the gas pedals anymore 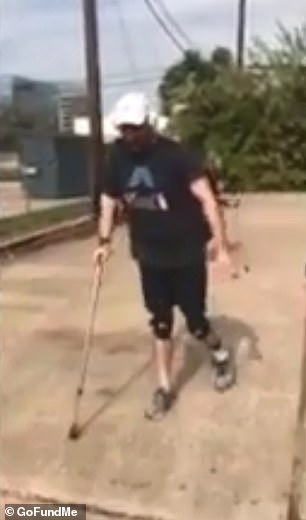 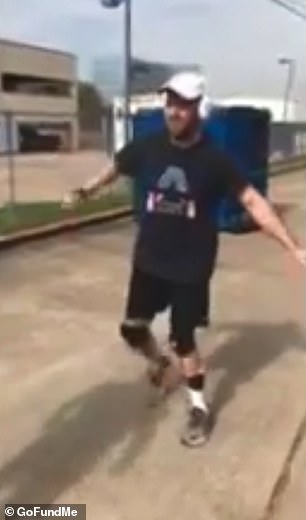 He was diagnosed with Guillain-Barré syndrome. This is a rare autoimmune disorder in which the body’s immune system attack its peripheral nervous system. Pictured, left and right: Fielder completes the last leg of the half Ironman

When the incident occurred in December 2011, Fielder said he felt especially tired that day, reported the Star-Telegram.

It had been just seven months after his wife gave birth to twins – a boy and a girl – so  he assumed it was just the combined stress of his job and being a first-time father.

However, when he got in his car to drive to his house, he couldn’t make his feet press down on the gas or brake pedals.

At the hospitals, after doctors ran tests, he couldn’t get up from the exam table.

‘When the first doctor said: “Have you ever heard of Guillain-Barré?” I wasn’t trying to be sarcastic,’ Fielder told WFAA. ‘I asked him if that was another doctor in the hospital.’

It is rare, affecting about one in 100,000 people worldwide and fewer than 20,000 cases per year, according to the National Institute of Neurological Disorders and Stroke.

Weakness and tingling in the extremities are the first symptoms. These sensations can quickly spread, eventually paralyzing the entire body.

After the first symptoms of the syndrome, sufferers’ conditions usually worsen for about two weeks before plateauing around the four-week mark.

Just four months later, in April 2012, the family moved from Florida to Texas to be closer to Fielder’s family.

Soon after, they were dealt with a series of blows.

Fielder was also diagnosed with Chronic Inflammatory Demyelinating Polyneuropathy (CIDP), a neurological disorder that results in progressive weakness in the legs and the arms.

It is caused by inflammation of nerve roots and damage to the myelin sheath, which are sleeves of fatty tissue that protect nerve cells.

CIDP is considered to be the chronic counterpart of Guillain-Barre syndrome, according to the National Institute of Neurological Disorders and Stroke.

Then, in December 2013, Fielder had surgery, hoping it would relieve some of the pain he felt in his back, the Star-Telegram reported.

But it didn’t go well and instead, one month later, he developed an embolism, which is when blood clots the artery.

He entered a rehabilitation program at Texas Rehab in Fort Worth, but his condition wasn’t improving.

Over the next two years, he worked on strengthening his core, his upper back and his posture.

Fielder told the Star-Telegram his push to do even more came in January 2016 when he heard his daughter say a prayer: ‘Dear God, in this new year, I want my daddy to walk again.’

He started doing physical therapy in a pool and felt sensation and movement in his hips for the first time years, but he hadn’t regained feeling in his legs.

Fielder also began training at Adaptive Training Foundation, a non-profit that helps veterans and others overcome physical impairment, in the fall of 2017. 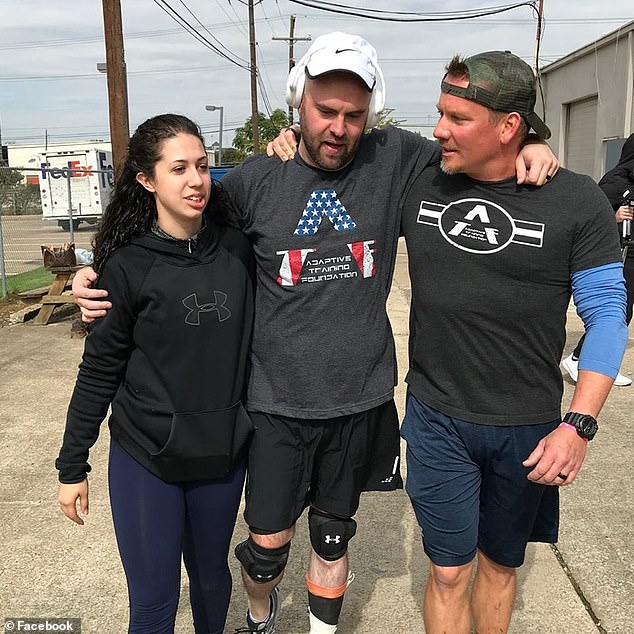 Just a few months later, Fielder was also diagnosed with Chronic Inflammatory Demyelinating Polyneuropathy, the chronic counterpart of Guillain-Barré. Pictured: Fielder, center, with friends after completing the half Ironman 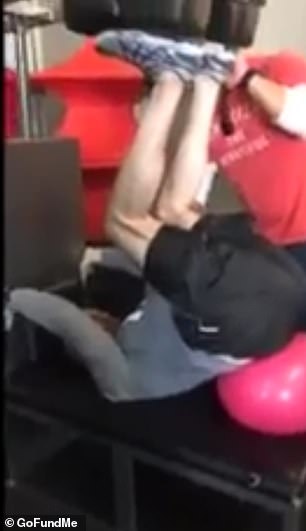 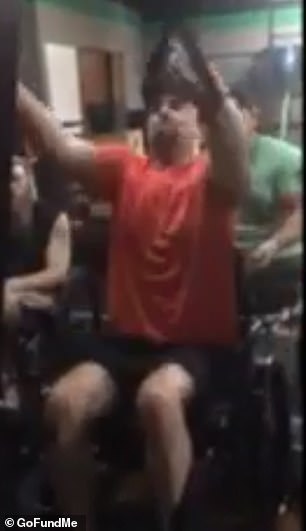 The father-of-two spend months in physical therapy to strengthen his core and upper back. He learned to walk again by wrapping golf balls, surgical tape and PVC pipe to his legs, which sends vibrations to his hips when he steps. Pictured, left and right: Fielder training for the half Ironman 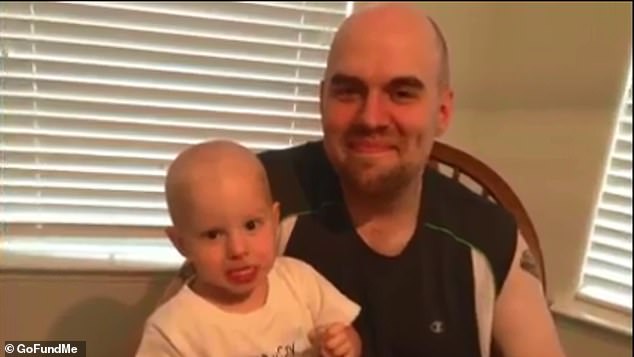 He was finally able to take his first steps with his legs wrapped in golf balls, surgical tape and PVC pipe, which is a plastic pipe usually used for plumbing.

When he took a step, it created a vibration which traveled up to his hips so he could control movement, according to a GoFundMe page.

Fielder began swimming and walking again. He first used braces and then was able to walk unassisted, the Star-Telegram reported.

‘The reflexes weren’t there,’ he told the newspaper. ‘The test results showed I had a crippling disease. But I still kept getting stronger.’

When he graduated from the Adaptive Training Foundation class in January 2018, he decided his next challenge was to compete in a half Iron Man.

Arlene White, a nurse at the cardiac rehab at Texas Health Burelson became his triathlete coach and worked with him for eight months.

‘I knew if I was going to do it for myself and for my own reasons, I wouldn’t be able to work through the pain,’ Fielder told the Star-Telegram. ‘Every day I trained, biked or was in the wheelchair, I would just pray for other people.’

In October 2018, he participated in the half Ironman marathon in New Orleans. Video shared online shows him crossing the finishing line on his own, falling on his knees and bursting into tears.

Fielder told the Star-Telegram that he next plans to walk 22 miles in 22 hours for 22 Kill, a suicide prevention non-profit organization with a focus on veterans and first responders.