A prisoner on Texas death row for killing a 5-year-old girl and her grandmother in a gang-related shooting at a child’s birthday party in Fort Worth a decade ago was executed Wednesday evening.

Erick Davila received lethal injection for using a laser-sighted semi-automatic rifle to spray bullets at about 20 people – more than a dozen of them children.

Annette Stevenson, 48, and her granddaughter, Queshawn Stevenson, were killed and four others were wounded, including the girl who was celebrating her 9th birthday.

Davila, 31, belted to a gurney in the Texas death chamber, offered no apologies.

He appeared almost cocky as several relatives of his victims entered the witness area of the death chamber, raising his head off the gurney and acknowledging some that he appeared to know.

‘I may have lost the fight but I’m still a soldier,’ he said when asked by the warden if he wanted to make a statement.

‘Take it as it is. To my supporters and family, y’all hold it down. Ten toes down. That’s all I got to say’

He was pronounced dead at 6.31pm CDT, 14 minutes after the lethal dose of the powerful sedative pentobarbital was administered. Davila was the ninth prisoner executed in the US this year, five of them in Texas. 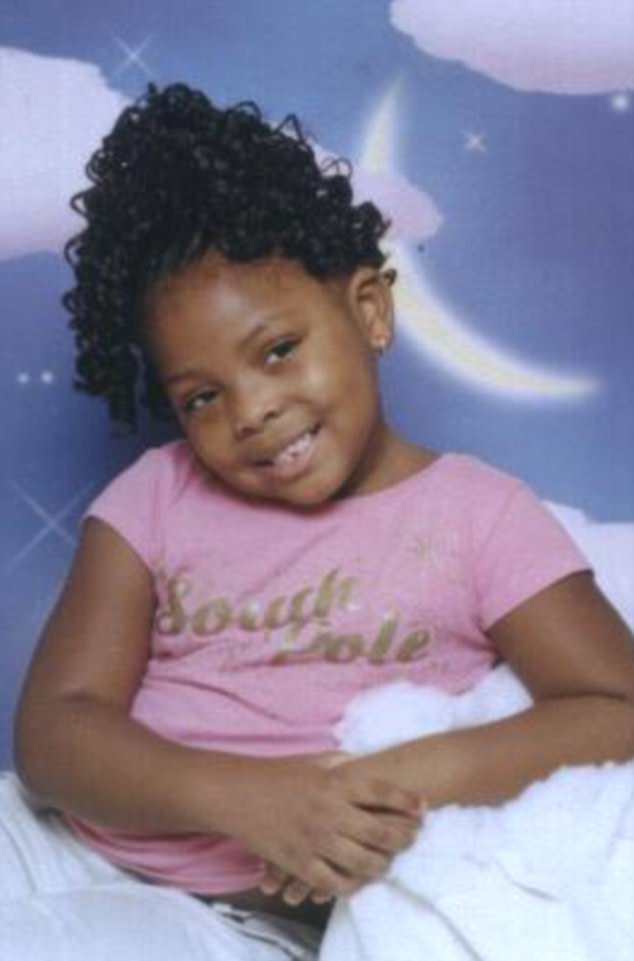 Annette Stevenson, 48, and her granddaughter, Queshawn Stevenson (pictured), were killed and four others were wounded, including the girl who was celebrating her 9th birthday

Authorities said the April 6, 2008, attack was in apparent retaliation for a previous run-in Davila had with the slain girl’s father, who was attending the party.

The US Supreme Court rejected an appeal from Davila’s lawyers about 30 minutes before the punishment was carried out.

Queshawn Stevenson’s sister, then 11, testified she saw a man inside a dark car holding a gun with ‘a red dot,’ and a short time later saw him standing next door and shoot. Davila was caught the next day after a brief police chase.

Davila’s attorneys argued to the Supreme Court that his execution should be stopped because it was improper for his trial judge, Sharen Wilson, now the Tarrant County district attorney, to request an execution date.

They also questioned the role of a lawyer working with Wilson on capital appeals cases who had represented Davila in an earlier appeal.

Prosecutors withheld information that Davila was so high on drugs during the shooting that he was ‘likely intoxicated to the degree that it would have rendered him temporarily insane,’ lawyer Seth Kretzer told the high court in a filing.

He argued that could have influenced jurors to decide on a lesser penalty, and questioned the constitutionality of how Texas juries decide death sentences.

Prosecutors also argued that Wilson prohibits assistants from participating in cases where they were defense lawyers and that courts have upheld the state’s capital sentencing procedure.

They said evidence shows Davila’s trial attorneys properly were provided notes from police investigators, that voluntary intoxication is not a defense under Texas law and that the shootings were intentional and deliberate.

Katherine Hayes, an assistant Texas attorney general, told the justices that Davila told detectives he went ‘to a shoot ’em up,’ was trying to ‘get the guys on the porch’ and never mentioned any intoxication to police.

Defense lawyers at Davila’s trial tried to show he didn’t intend to kill multiple people, a criterion for the capital murder charge. They argued he instead only intended to kill Jerry Stevenson, whose daughter and mother were shot to death.

Authorities said Stevenson belonged to a rival gang and that Davila believed members of that gang shot him in 2005. Stevenson denied belonging to the gang.

Davila was accused but not tried in another fatal shooting just days before the birthday party slayings. While awaiting trial for capital murder, he also attacked Tarrant County jailers and maintenance workers during an escape attempt.

He previously served prison time for a 2004 burglary in Tarrant County and was released after about a year.