Texas man, 84, becomes the oldest kidney donor in the US after donating to his neighbor

An 84-year-old Texas man became the oldest kidney donor in the US after giving his to his 72-year-old neighbor.

Linda Nall, from Austin, was diagnosed with lupus more than 30 years ago, in 1986.

Despite being put on several medications, her condition began deteriorating to such an extent that she was told she was in dire need of a kidney transplant.

She began a social media campaign and stuck a sign in her front lawn that read: ‘I am [blood] type O and I need a kidney transplant.’

When Frank Dewhurst, who lives six doors down from her and is the former president of the Homeowner’s Association, paid her a visit, she assumed it was about official matters – perhaps that her lawn post needed to be taken down.

Instead, Dewhurst told her that he also had type O blood and wanted to donate his kidney to her.

After undergoing months of testing, Dewhurst was found to be a perfect match for Nall.

Frank Dewhurst, 84, of Austin, Texas, donated his kidney to his neighbor, Linda Nall, 72, making him the oldest kidney donor in the US. Pictured: Nall, right, with Dewhurst a few days after the transplant 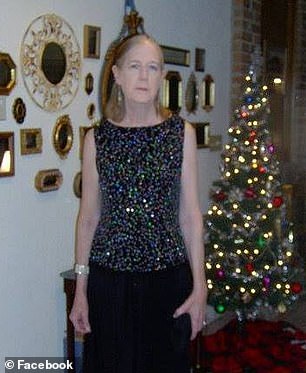 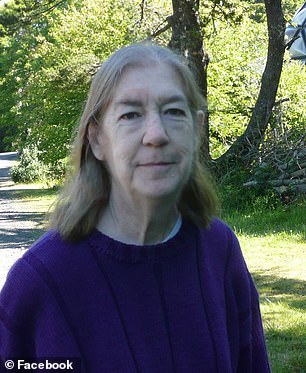 Nall (left and right) was diagnosed with lupus, an autoimmune disorder that causes the body’s immune system to attack its own tissues and organs, in 1986. Her kidneys began scarring and doctors told her that her best chance of survival was to find a living donor

‘When he told me he wanted to give me his kidney, I was shocked,’ Nall said, according to a news release from Houston Methodist Hospital, where the surgery occurred.

‘It’s an incredible thing he has done for me and I am so grateful.’

Nall was 39 years old when she was diagnosed with lupus, an autoimmune disorder that causes the body’s immune system to attack your own tissues and organs.

Lupus is often hard to diagnose the disease because the signs and symptoms can mimic other conditions including arthritis and fibromyalgia, a disease that causes pain and stiffness in the muscles and joints, of which Lady Gaga is a known sufferer.

According to the National Resource Center on Lupus, an estimated 1.5 million Americans live with the disease.

Among those suffering is singer Selena Gomez, who revealed her diagnosis in 2016.

WHAT IS THE KIDNEY DONOR PROCESS?

1. Make sure the donor’s and recipient’s blood are compatible

2. Tissue-typing blood test, which looks at the number of genetic markers the donor and recipient share

3. Cross-matching blood test, which is to ensure the recipient will react to the new kidney

Other tests in no particular order:

These tests can take as long as six months to complete.

However, the actual number may be higher because no large-scale study has ever been conducted on how many Americans have lupus.

In 2001, the disease began attacking her kidneys, causing serious damage and scarring, Nall wrote in a Facebook post.

Doctors told her she needed a kidney from a live donor, not only because it would last longer, but because the wait for a cadaver kidney, from a deceased donor, could be between five to seven years.

This was time that Nall didn’t have.

Her husband, Carl, wasn’t an eligible donor because his blood type is AB and Nall needed a donor with blood type O.

She spent a year-and-a-half setting up a Facebook page, creating T-shirts and the sign that went up in her yard.

Dewhurst saw the sign, discussed donating with his wife, and then visited Nall. 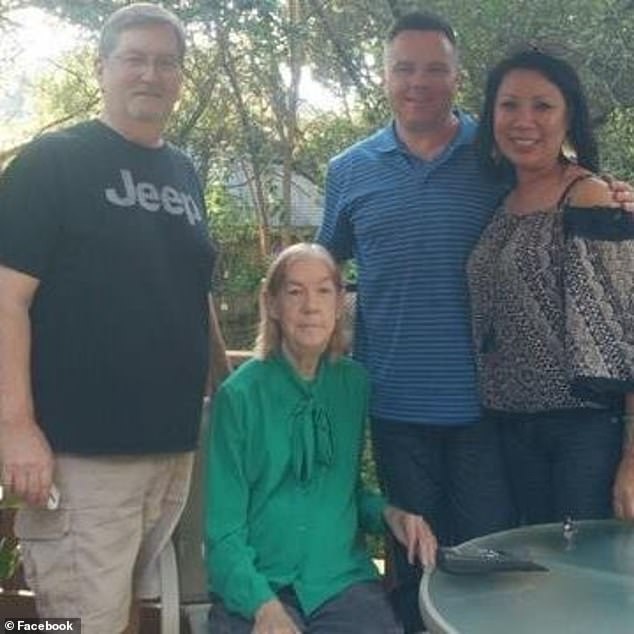 Nall (pictured, seated, with family members) started Facebook campaign and put a sign on her front lawn that read: ‘I am [blood] type O and I need a kidney transplant’ 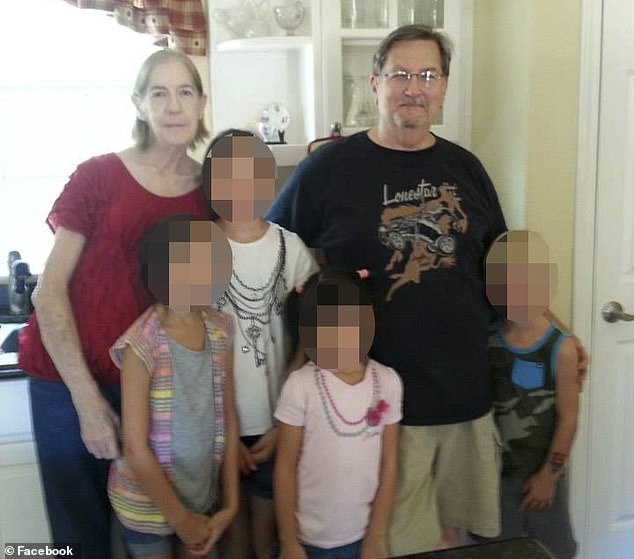 Dewhurst learned of her medical condition after he saw the sign and, after discussing it with his wife, offered to donate his kidney. Pictured: Nall, far left, with her husband, Carl, and family members

‘After undergoing a number of tests, I was cleared to donate and very happy to do so,’ Dewhurst said in the release.

Dr Hassan Ibrahim, chief of kidney diseases at Houston Methodist Hospital, says there is a misconception that older people are discouraged from donating.

‘Besides Mr Dewhurst, we have taken kidneys from an 80-year old, a 79-year old and other donors in their late 60s and early 70s,’ Dr Ibrahim said, according to the release.

‘They receive a full workup to make sure they are physically strong enough to donate. If everything checks out, there is no reason to keep them from saving someone’s life.’

Of the roughly 21,000 people who received kidney transplants in 2018, five percent were from donors aged 65 or older.

Nall’s transplant occurred on April 30th. Dewhurst was discharged 48 hours after surgery and Nall was discharged four days later. Both report that they are recovering well.

‘I can’t wait to spend more time with family and friends and just socialize more,’ Nall said, according to the news release.

‘I have lived a long time not being able to eat what I want to eat and do what I want to do. I am going to make the most of Frank’s generous gift and live life to the fullest. I cannot wait.’