Texas man, 40, is arrested after ‘threatening an active shooter-style event’ when writing a negative online review for a Florida hotel he stayed in

A Texas man was arrested after allegedly threatening an ‘active shooter’-type event in a review of a Florida hotel he didn’t enjoy staying at.

Police said Joseph Lee McKinney, 40, of Leander, Texas, was arrested Saturday morning in Port Canaveral, Florida, after he got off a cruise ship, according to Space Coast Daily.

Authorities said that workers at the Hilton hotel reported receiving an electronic guest review from McKinney on Friday, in which he supposedly claimed to be unhappy about his recent stay at the hotel.

Joseph Lee McKinney, 40, was arrested after he allegedly sent a negative review to a Florida Hilton hotel in which he threatened an ‘active shooter-style’ event 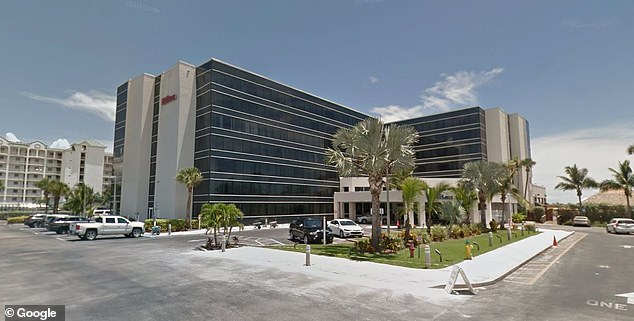 Workers at Florida’s Hilton Cocoa Beach Oceanfront Hotel reported the negative review to police. Authorities then track down McKinney on a cruise ship and arrested him Saturday

‘The review contained threatening language that made reference to an “active shooter style” event at the hotel,’ Cocoa Beach Police Sgt. Manny Hernandez told the newspaper.

Police stayed at the hotel overnight until investigators were able to track down McKinney.

Several law enforcement agencies worked together to determine that McKinney was on board a cruise ship and then arrested him when the cruise ship stopped at Port Canaveral.

Cocoa Beach Police Chief Scott Rosenfeld said that McKinney’s arrest should ‘send a message that we have zero tolerance for any threat of mass violence.’

Brevard County Jail records indicate that McKinney is still in custody and is awaiting trial. He is being held on a $25,000 bond.