Developed by the large anti-smoking and public health non-profit the Truth Initiative, the text-based coaching is being integrated into the group’s This Is Quitting and BecomeAnEx online quitting aids.

The need for adolescent-focused programs is dire, according to a slew of recent studies and declarations of a youth vaping ‘epidemic’ from the Food and Drug Administration (FDA) and the Surgeon General.

FDA Commissioner Gottlieb called for cessation drugs for teens last month, but in the mean time the Truth Initiative’s program hopes to help fill that void with text-coaching designed with teens in mind.

Between 2017 and 2018, the number of high school students using e-cigarettes double, according to a University of Michigan study published in December.

The rise of vaping was the steepest single-year change documented by the survey in all of its 44 years – a greater increase than has ever been seen in teen drinking, smoking or drug use.

E-cigarettes were first marketed as smoking cessation tools themselves, but for the teen population they’e taken a quick, dark turn, fueled by the enormously popular USB-like device, the Juul.

The devices, which heat high-concentration nicotine ‘e-liquids’ into vapor are still so new that we don’t fully understand their health effects.

Early research on them suggests that e-cigs likely have equally disastrous effects on cardiovascular health as cigarettes do.

Other studies suggest that terpenes used to flavor e-liquids – especially the sweet ones that have enticed so many young users to the products – may be carcinogenic.

The results of studies on whether or not e-cigs drive teens to take up smoking have yielded a mixed bag of results, but, tellingly, many young adult vapers also smoke cigarettes.

‘A few years ago it would’ve been incredible to me that we would be here today discussing the potential for drug therapy to help addicted young people quit,’ Dr Gottlieb said at a January 18 public hearing on the issue.

But the day is here.

And while it may take some time for adolescent-safe addiction medications to be developed or for pre-existing drugs to be FDA-approved for the younger patients, Truth Initiative has quickly risen to the call for action with its new text service. 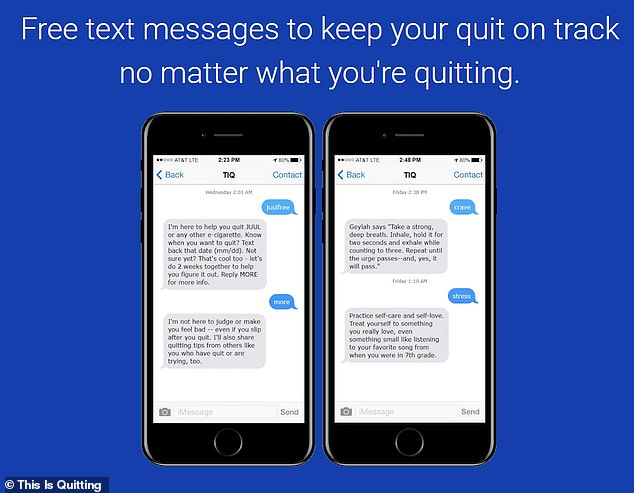 The messages are similar to Truth Initiative’s  quit smoking app (pictured) but tailored to teens and young adults who ‘don’t see themselves as smokers,’ its developer says

The program is free and kicked off by texting a toll-free number from an Apple or Android phone.

The user is then asked to respond with their age category – under 13, 13-17, 18-24, over 24, or that they are the parent of someone trying to quit e-cigs – and starts receiving texts for from a different number.

Although it adds the caveat ‘or any e-cigarette,’ the bot calls out quitting Juul by name.

Once a day for six weeks the person trying to quit gets a text message once a day – a few more on the challenging days immediately before and after the day they designate as their ‘quit day.’

The messages are quite clearly written based on mindfulness techniques, but (at least when set to the 13-17 age group) geared toward teenagers.

For example, if you’re not sure when you want your quit date to be yet, the bot warmly reassures you that ‘that’s cool too.’

It also takes on a more personal tone to remind users ‘I’m not here to judge you,’ and offers to send you some additional encouragement if you text back ‘CRAVE, STRESS or SLIP’ back to the service.

‘While the science behind overcoming nicotine addiction may be the same, e-cigarette users don’t identify as smokers,’ she said in a statement.

‘They have different barriers to quitting, and, especially in the case of teens and young adults, many want an anonymous way to go about quitting without involving their parents or friends, which texting provides.

‘We believe this new program will be very effective in getting the right support and information into the hands of anyone looking to quit e-cigarettes, including adults who have successfully used them to quit smoking, but are now looking to quit nicotine completely.’