The Monday morning back-to-work commute has been made even worse for one driver thanks to a texting tradie who was so distracted by his phone that he smashed into thew back of his car during peak-hour traffic.

The tradie was caught out by a dash camera texting and driving in a ute before rear-ending a vehicle in front just before 8 o’clock on Monday morning.

The accident was recorded on a dash camera from both the driver’s perspective and the rear of the car.

As the driver of the vehicle in front pulls up to stop in traffic his car is ploughed into from behind by a white ute.

From the rear camera, the driver of the ute can be seen looking down at his phone while accelerating, and it is only at the last second that he realises he is about to smash into the vehicle in front.

Immediately realising his mistake, the tradie puts his hand to his face in shame before throwing his phone onto the passenger seat.

‘Someone just rammed into the back of me,’ the driver in front said after the sudden thud.

The crash injured the driver in front, who groans before saying ‘f**k, my shoulder’. 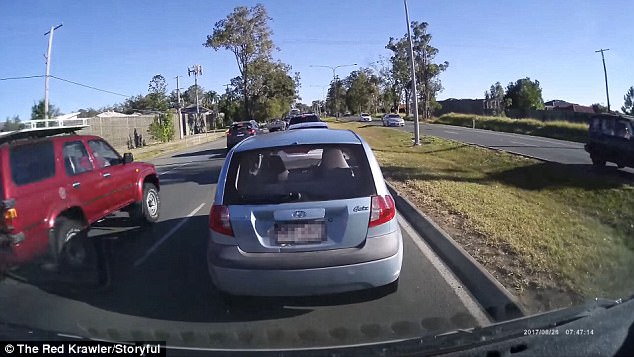 In the description for the video posted on YouTube, the driver said his arm was resting on the gear stick with his elbow locked out, ‘so when I got hit from behind it’s done something ouchie in my shoulder’.

The driver of the ute slowly reverses before getting out of his car to assess the situation.

The video has gone viral since it was posted online on Tuesday, attracting more than 40,000 views in less than a day.