Footage from 2007 shows Prince Maha throwing a birthday party for his pet poodle Fufu – who held the rank of Air Chief Marshall – at the Royal Palace in Bangkok. Pictured: His third wife dressed in nothing more than a G-string to celebrate Fufu’s birthday

King Maha, is a father-of-seven with three failed marriages, a love of fast jets and a reputation for having an explosive temper.

During an attempted coup in Thailand in 2014, a film was published online of his third wife dressed in nothing but a black G-string while she sang happy birthday to the royal couple’s beloved pet poodle, Fufu.

The King was described by one royal biographer as ‘a man prone to violence, fast cars and dubious business deals’.

In May last year, the Crown Prince was pictured on the runway at Munich airport wearing a skimpy, torso-baring tank top, with fake tattoos covering the small of his back, chest and arms.

The scantily clad woman standing beside him on the red carpet was Suthida Tidjai, a flight attendant who is believed to be his wife.

In stark contract to his father, who had one wife and a long and happy marriage lasting 66 years until his death, the prince has been official married three times.

His own mother Queen Sirikit, on a trip to the US in 1982, described him as something of a womaniser.

‘My son the crown prince is a little bit of a Don Juan. He is a good student, a good boy, but women find him interesting and he finds women even more interesting, she told reporters.

Speaking at a news conference in Dallas, but clearly addressing her son, she delivered a harsh warning.

‘If the people of Thailand do not approve of the behaviour of my son, then he would either have to change his behaviour or resign from the royal family,’ she said.

He wed his first cousin Soamsawali Kitiyakara in January 1977 and the couple had a daughter. But the marriage fell apart.

Nine months after his daughter was born, the prince had a son with actress Yuvadhida Polpraserth, with whom he went on to have a total of five children.

He divorced Ms Kitiyakara in 1993. Three years later his relationship broke down with Ms Polpraserth as she fled to the UK in 1996, after a spectacular bust up.

In 2001 he wed his third wife Srirasmi Suwadee, describing her as a ‘modest and patient’ woman who ‘never says bad things towards anyone’.

In a 2002 interview , in which he stated his intentions to settle down, he added: ‘She lives a simple life and most of all, she brings warmth to the family and makes home a home.’ 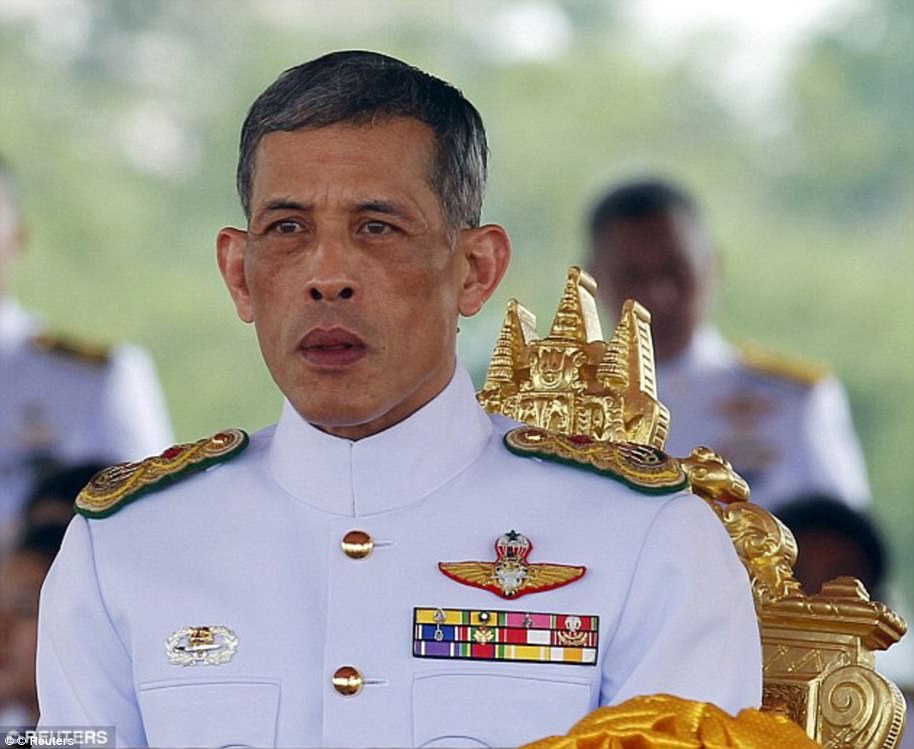 King Maha, is a father-of-seven with three failed marriages, a love of fast jets and a reputation for having an explosive temper

In 2007, footage published online showed the couple throwing a party for his pet poodle – who held the rank of Air Chief Marshall – at the Royal Palace in Bangkok.

Princess Srirasmi, a former waitress, who sang happy birthday to the dog topless, also got on her knees and ate from a dog bowl in the same video.

The couple had a son but the marriage collapsed at the end of 2014.

Prince Maha stripped her of her royal titles and, after granting her a reported £4.5m settlement, exiled her to an undisclosed location in Thailand.

The Economist has reported the Crown Prince is ‘widely loathed and feared’ by his people.

But Thailand’s lèse-majesté laws have largely protected King Bhumibol and the royal family’s alleged scandals from being exposed.

Journalist Paul Handley’s unauthorised biography of King Bhumibol, titled ‘The King Who Never Smiles’, in which he referred to the Crown Prince as a ‘violent’ man, was banned in Thailand because authorities said it would ‘affect national security’.

In it he wrote: ‘Bhumibol’s most fundamental failing is the Achilles’ heel of every monarchy: he has been unable to guarantee an orderly succession to a wise, selfless, and munificent king like himself.’