Thanasi Kokkinakis is confused for Nick Kyrgios at the Australian Open

Hilarious moment Thanasi Kokkinakis REFUSES to answer a question from tennis reporter who confused him for great mate Nick Kyrgios after his first round Australian Open win: ‘Taking the absolute p***’

Thanasi Kokkinakis hilariously snubbed a reporter at the Australian Open after he was confused for great mate Nick Kyrgios.

In his post-match press conference following his win over Fabio Fognini in the first round, a reporter greeted the 26-year-old by saying ‘hi Nick’.

Kokkinakis and Kyrgios are close friends and triumphed in the men’s doubles at the Australian Open last year, but the Adelaide-born star was not willing to let the embarrassing faux pas slide. 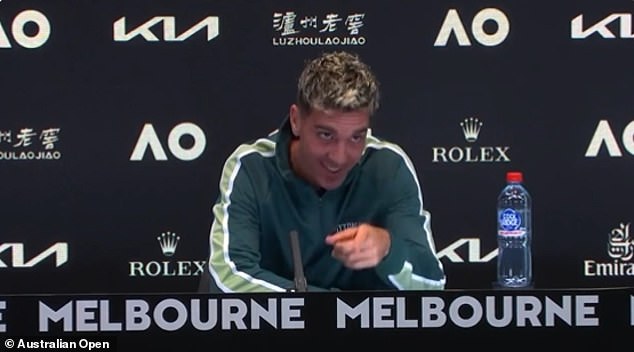 ‘Wow, wow! That is a firing, that’s you done,’ he said with a smile on his face.

The reporter responded: ‘You will understand why…’ but Kokkinakis was unwilling to listen to the journalist’s excuses.

Sharing the clip on social media, Kokkinakis tweeted: ‘Taking the absolute p***’ alongside the laughing emoji.

Kyrgios also shared the clip with the caption: ‘Kyriakis’ – a mash-up of the pair’s names. 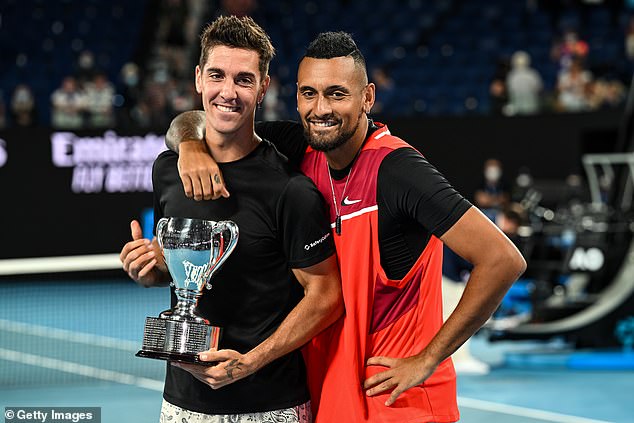 Kokkinakis and Kyrgios won Australia’s hearts and minds as they formed the unbeatable duo ‘Special Ks’ at the grand slam in 2022.

His friendship with Kyrgios was shared with tennis fans in Netflix’s new tennis docuseries Break Point, which aired last week.

Kyrgios pulled out of this year’s tournament, citing a knee injury, and said that he would be using Kokkinakis’s resilience as inspiration on his road to recovery, with the 26-year-old also having battled his own injury issues.

‘I guess I can draw some inspiration from someone like Thanasi who has had a bunch of injuries and has bounced back,’ he said.

The knee injury isn’t a career-threatening setback but Kyrgios made the ‘sensible’ decision to withdraw to avoid suffering long-term damage.