Thanasi Kokkinakis’s opponent is accused of TANKING in clash that was suspended with Aussie just five points from victory: ‘He’s a disgraceful advertisement for men’s tennis’

Italian tennis star Fabio Fognini has been accused of ‘tanking’ in his clash with Aussie Thanasi Kokkinakis at the Australian Open on Tuesday night, with fans appalled by his lack of effort.

Kokkinakis stormed through the first two sets against Fabio Fognini 6-1 6-2, and was leading 4-2 in the third when play was suspended due to rain.

Italian tennis star Fabio Fognini (pictured) has been accused of ‘tanking’ in his clash with Thanasi Kokkinakis at the Australian Open, with many fans appalled by his lack of effort 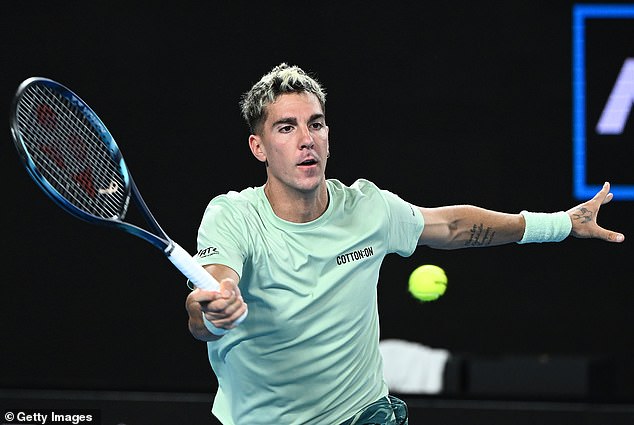 The match will be resumed on Wednesday, though many fans aren’t expecting much of a fight from the Italian, who has been called into question for lack of energy on the court.

‘I don’t know how to explain that,’ said Channel 9 commentator Adam Peacock after a lazy shot from Fognini during the third set.

‘Spoke for itself … A real lack of energy from Fabio at the moment.’

Roger Rasheed said: ‘[Kokkinakis’] opponent hasn’t yet tested him…and put him under any duress. Shots like that have come off the Italian’s racquet again and again.’

Mark McGowan of The Age tweeted: ‘Fognini’s skating very close to the tanking line. And I’m being generous.’ 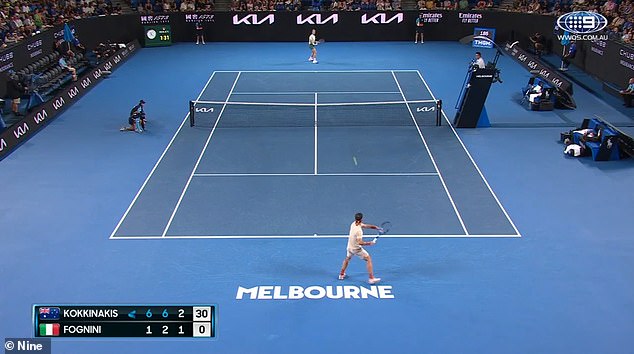 Fognini pictured playing an inexplicably bad shot against the Aussie

Tennis fans on social media were even more scathing of the lacklustre performance from the former world No.9, who hit 23 unforced errors.

‘It’s not the first time that Fognini has faced allegations of tanking. He should’ve been rubbed out of tennis years ago. He’s a disgraceful advertisement for men’s tennis,’ wrote one Twitter user.

‘Being at the match, it’s pretty clear Fognini is not giving his best effort. Tanking at its finest. Big fine coming,’ said another. 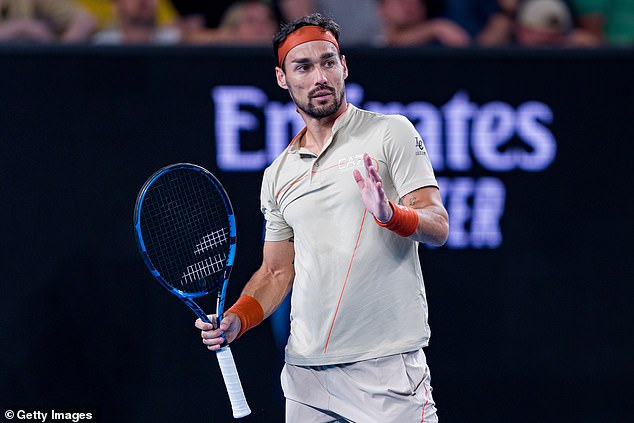 Fognini (pictured) is no stranger to controversy, having once spat at a chair umpire, used a homophobic slur at the Olympics, called a female umpire a ‘whore’ and wished for a ‘bomb to explode’ on Wimbledon

Fognini is no stranger to controversy, having once spat at a chair umpire, used a homophobic slur at the Olympics, called a female umpire a ‘whore’ and wished for a ‘bomb to explode’ on Wimbledon.

The Italian veteran’s highest career ranking has been nine, with his biggest title win coming in 2019, when he took out the Monte Carlo Masters. He also won the Australian Open doubles title in 2015 with compatriot Simone Bolelli.

Should he lose to Kokkinakis when play is resumed, he’ll pocket $106,250 under the Australian Open pay scale.