Romance fans can reside in the former home of novelist Dame Barbara Cartland as it goes on sale for £1million.

Boasting a front door painted in Dame Cartland’s favourite colour pink, the thatched cottage is also to be awarded a classic heritage ‘blue plaque’ by the British Plaque Society to acknowledge that the romance writer, who was awarded a DBE, resided there 1941 to 1949.

The plaque is awarded by the British Plaque Society of which Charles 9th Earl Spencer is the patron.

The thatched cottage has four bedrooms and a snug, and an annexe with a further three bedrooms and snug. It’s beautifully manicured gardens lead down to a private mooring on the River Great Ouse.

River Cottage, in Great Barford, Bedfordshire, was home to world renowned author Dame Barbara Cartland, known for her love of pink. The property has pink accents throughout, including the door onto the patio 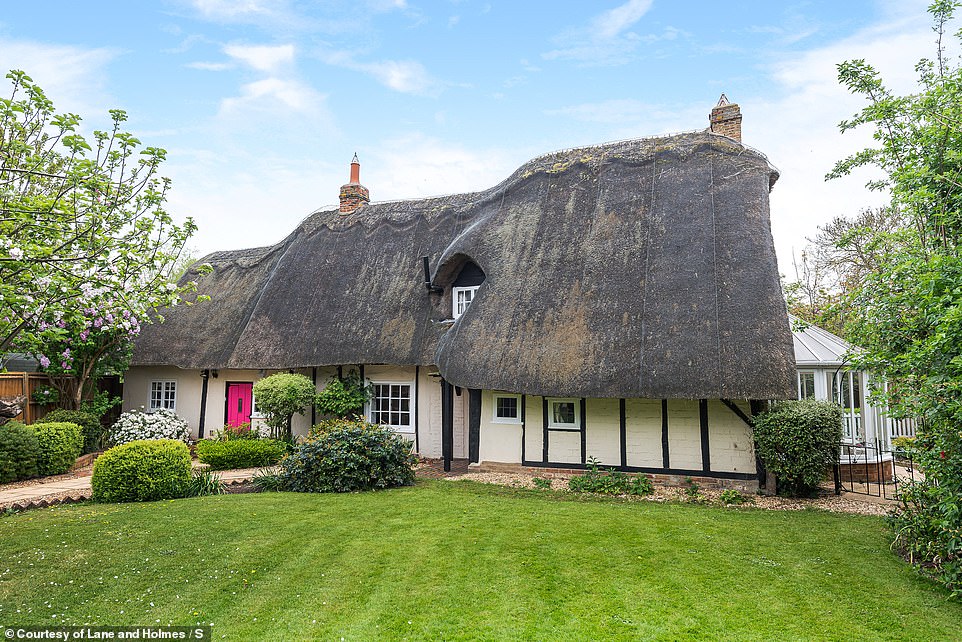 Another pop of pink can be seen on the other side of the thatched cottage, opening out onto manicured lawns and a blossom tree on the left 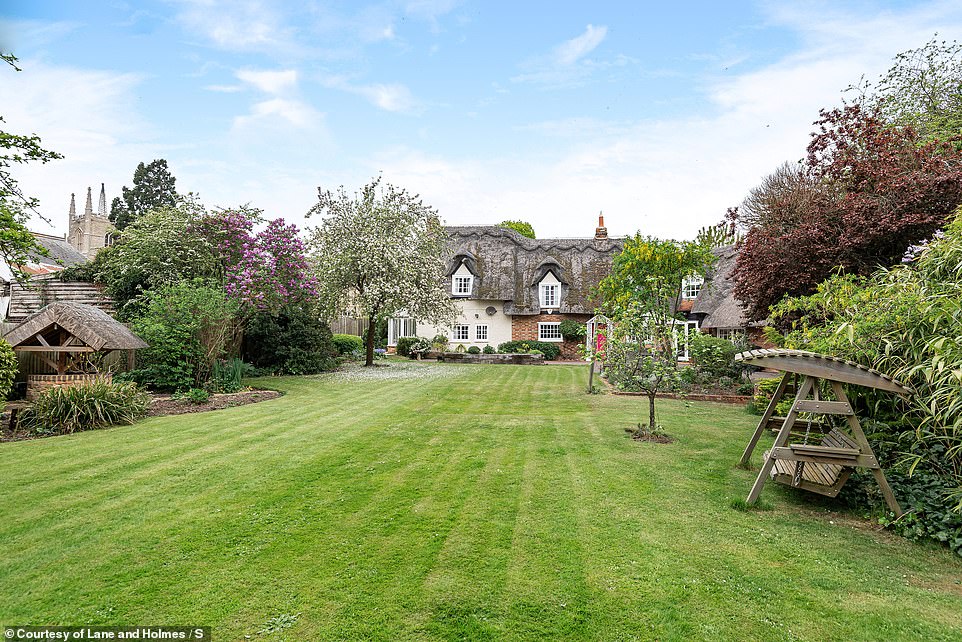 River Cottage its in Great Barford, Bedfordshire, with the nearby All Saints Church visible from the back garden, which backs on to the River Great Ouse 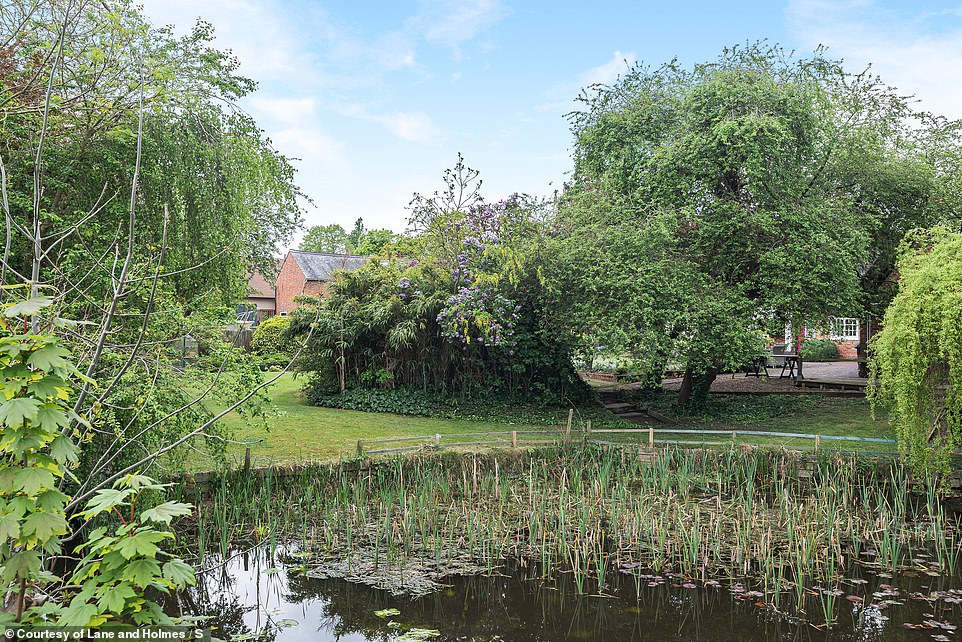 The stunning Grade ll listed property includes a private mooring surrounded by trees. The home has been sympathetically decorated with certain nods to the ‘Queen of Romance’ everywhere

They lived there as a family after Dame Barbara divorced her first husband and Raine’s father, Alexander George McCorquodale, and married his cousin, Hugh McCorquodale, having sons, Ian and Glen.

Although it’s many years since Dame Barbara lived in the 18th Century house, it has been sympathetically decorated with certain nods to the ‘Queen of Romance’ everywhere.

Amongst them is a bedroom decorated in Dame Barbara’s favoured pink, in homage to the writer, who died in May 2000. 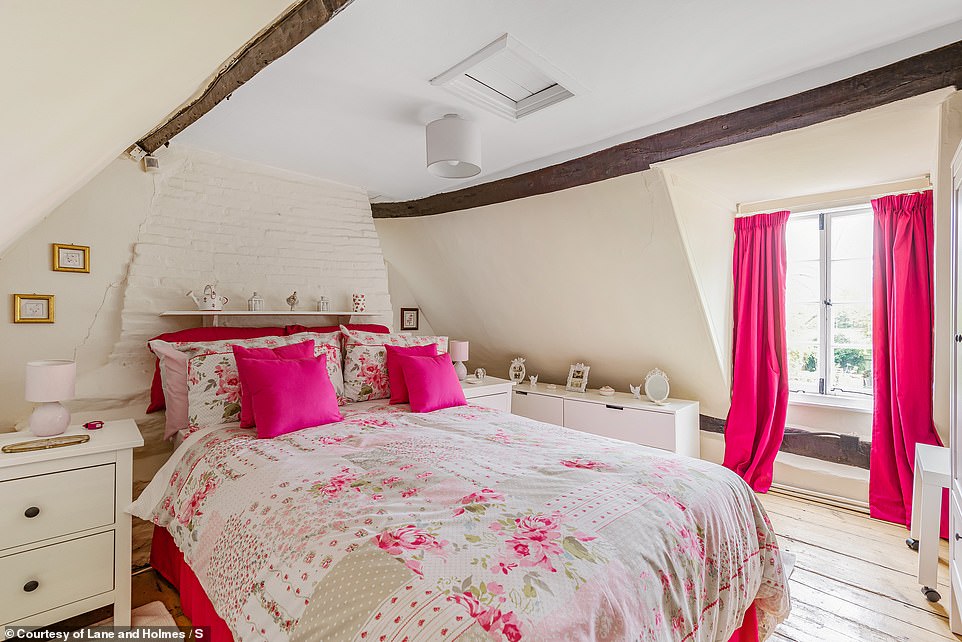 One of the bedrooms is decorated in Dame Barbara’s favoured pink, in homage to the writer, who died in May 2000. Pink curtains and throw cushions complete the room 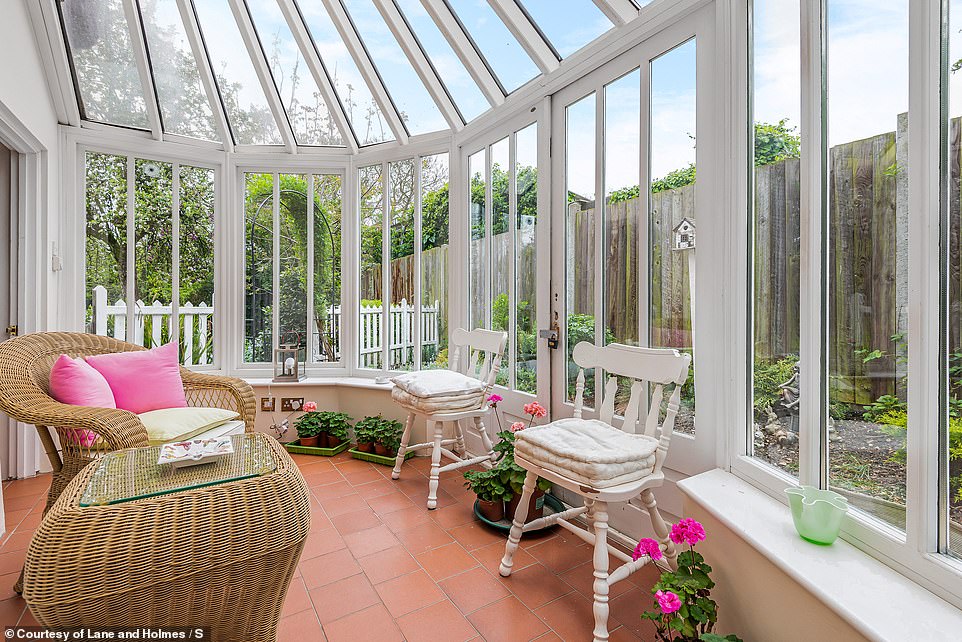 Pink cushions and flowers also fill the west-facing conservatory, which opens out from the open plan living and diving room 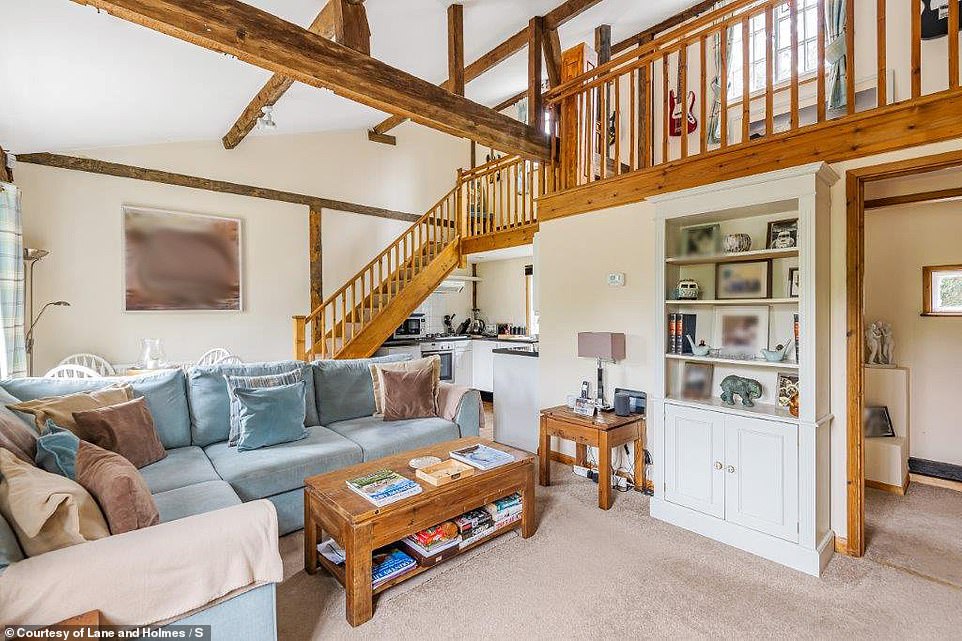 The open plan living, kitchen and dining room in the annexe has exposed wooden beams and cream walls. A baby blue sofa takes centre-stage, with the colour also featuring prominently throughout the property 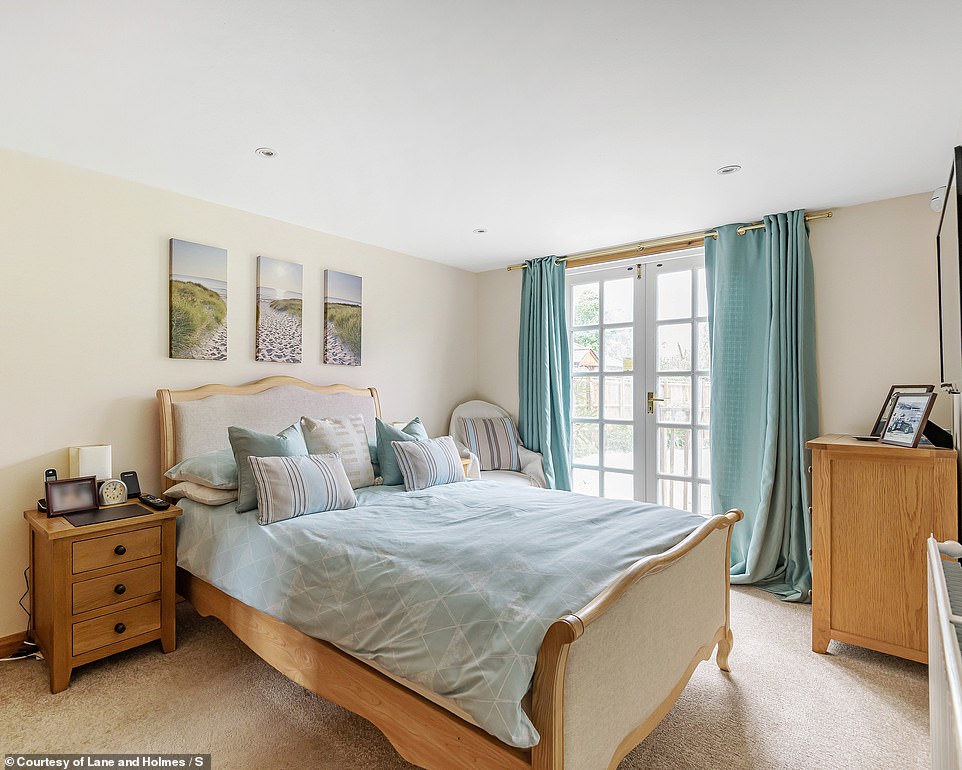 A double bed sits inside one of the property’s four bedrooms, which has French doors that open out to the garden 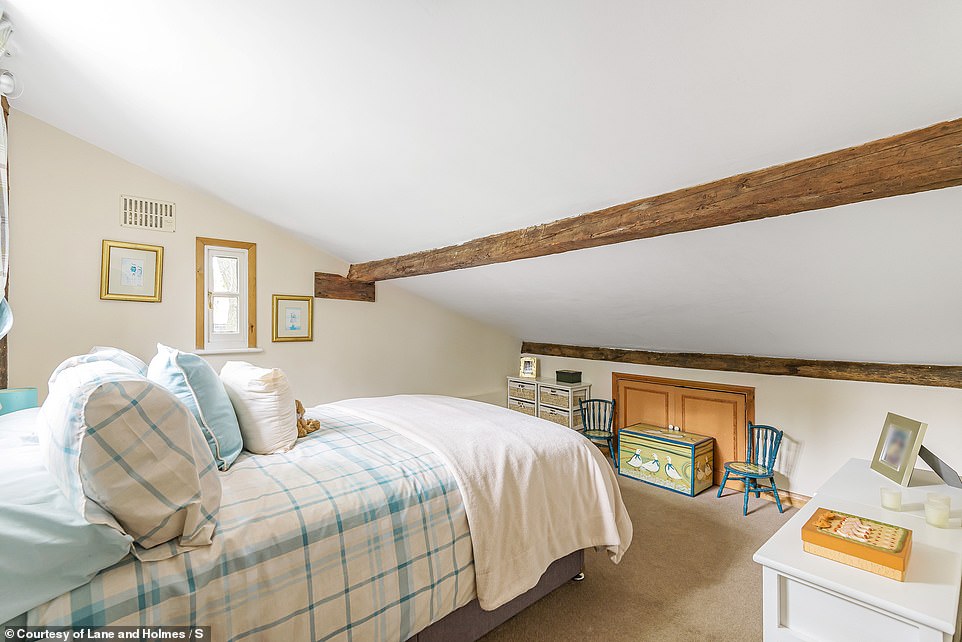 Exposed beams feature heavily in the Grade II listed property, which has the feel of a romantic chocolate-box cottage 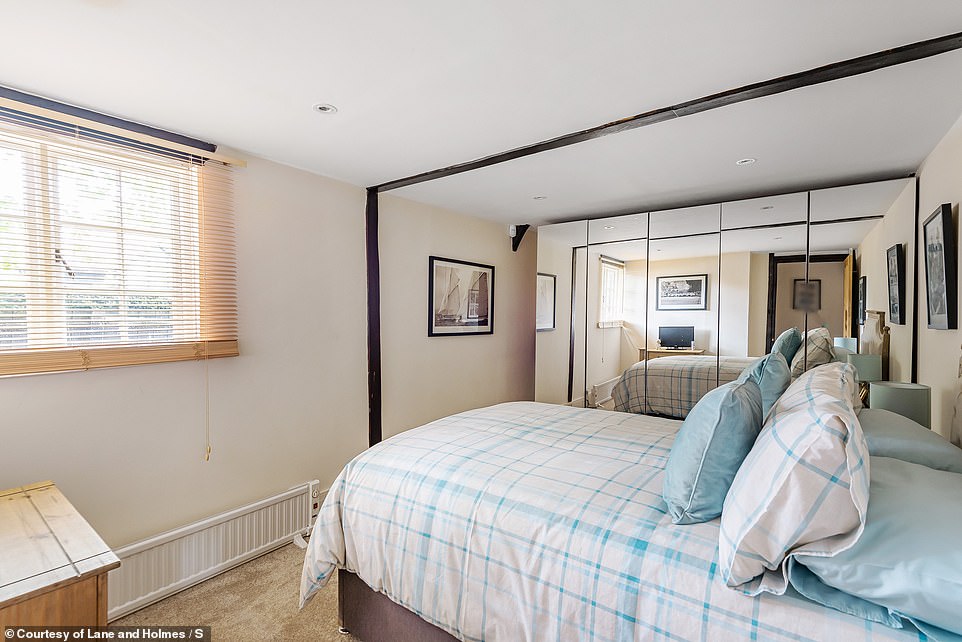 Another of the four bedrooms, which has space for a dresser and large wardrobe. Light blue soft furnishings finish the room

There is also pink planting in the garden and three external doors painted in shocking pink, to allude to her former presence in the house.

It has just gone on the market with a guide price of £1,000,000 and the current owners are hoping that the sense of romance that currently emanates throughout the cottage will be retained by whoever takes ownership.

The abode, which could be a perfect for a family, also features a small conservatory, together with a characterful bathroom off the main entrance hall, a kitchen and breakfast room, a utility room and a study that could easily double as a fourth bedroom.

The home also features breath taking gardens and plenty of off road parking.

The rear of the garden slopes down to the private mooring and frontage to an inlet from the River Great Ouse. 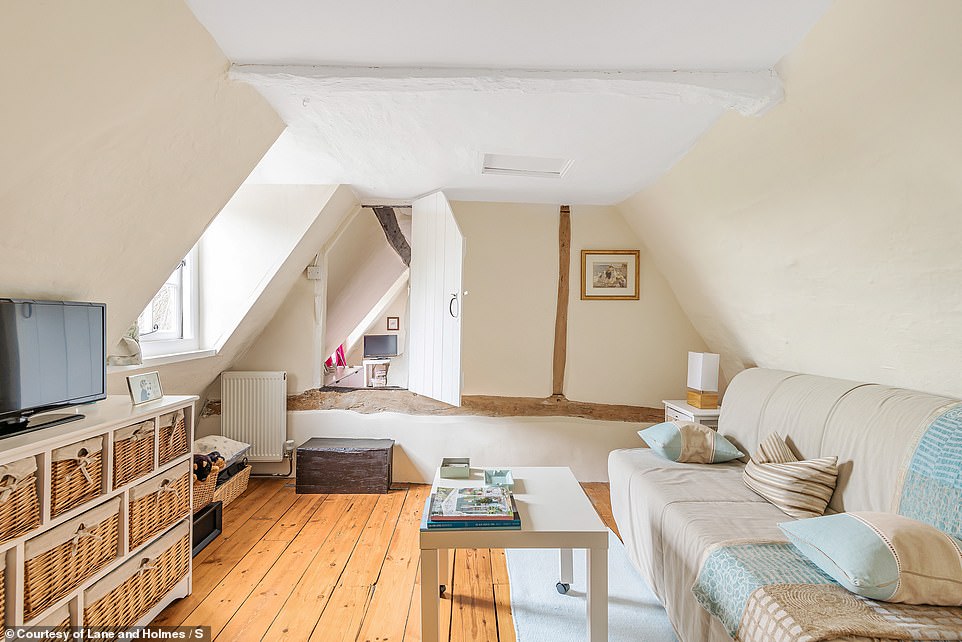 A snug sits nestled between two bedrooms, creating a cosy space for a sofa and television, with light still flooding in from the window in the sloping roof 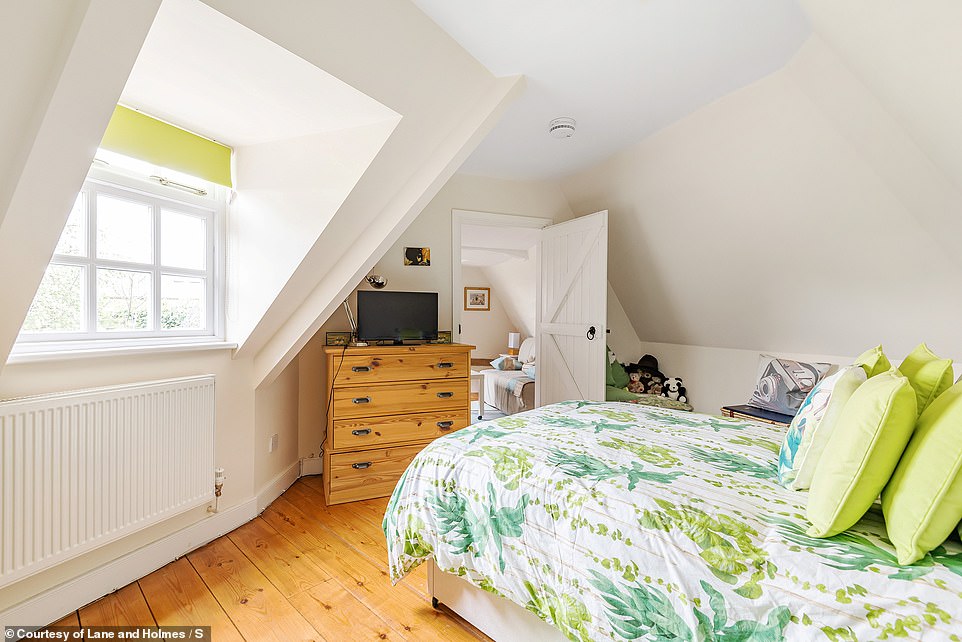 The third bedroom opens out onto the snug, and can be reached by a separate staircase not captured in the image 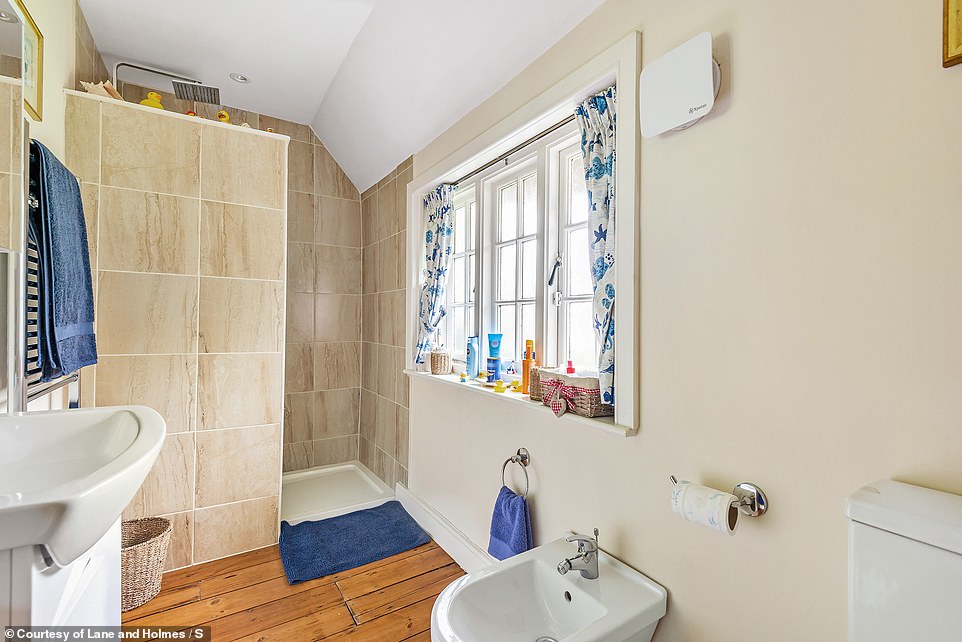 All of the bathrooms are on the ground floor of the property, which sits on 0.3 acres in a village setting 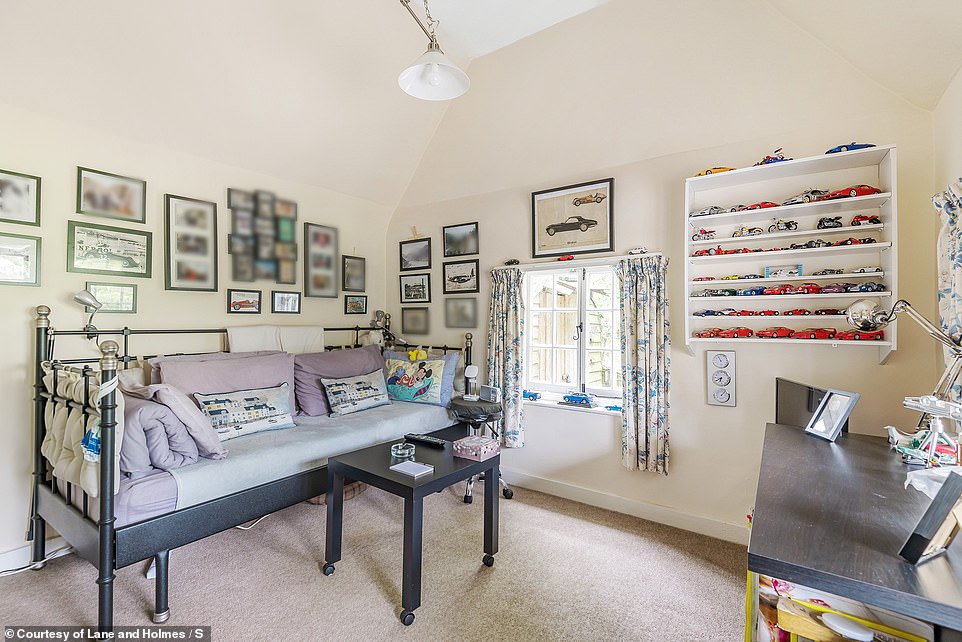 The annex has an additional three bedrooms and snug, creating ample space to turn one of the bedrooms into a study

A gate leads out on to the path which runs alongside the river making it the perfect place to take in the splendid views and walks on offer.

The cottage is located in a sought after village which is only a short drive from the A1.

Equally, quick and easy access is available to the A421 for the M1 and Milton Keynes.

The nearby towns of Bedford and Sandy offer many amenities, which include rail services being from 41 minutes to central London, which is ideal for any commuters. 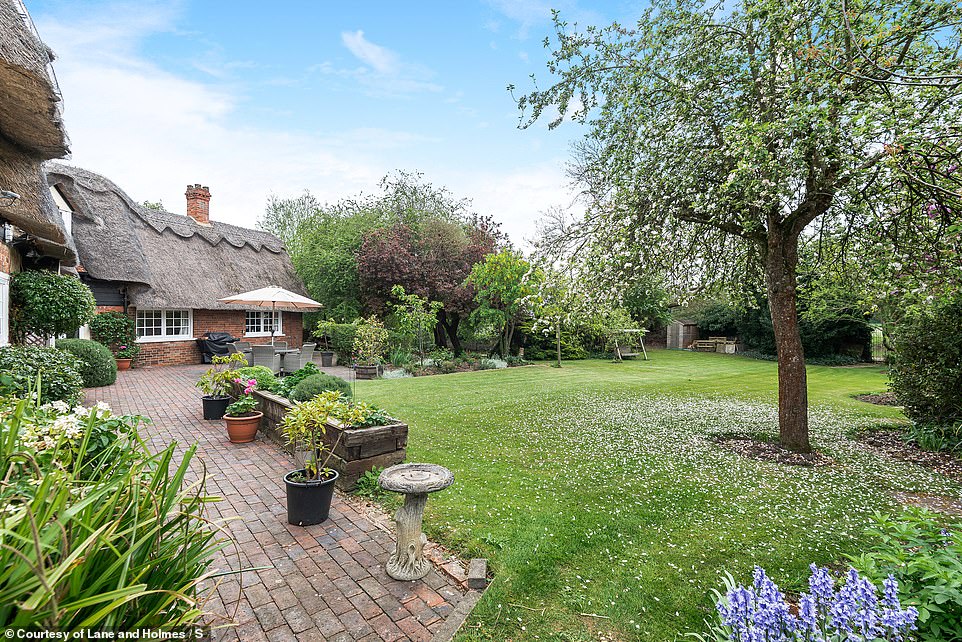 A blossom tree sits in the garden, which has a patio spanning the length of the house, creating an outdoor space suitable for a garden dining table and chairs 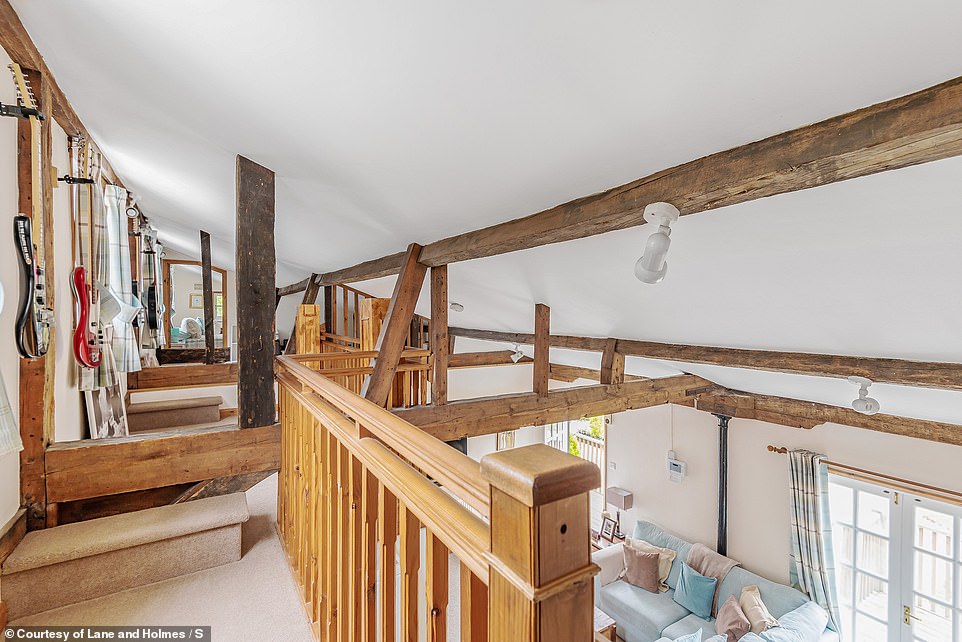 In the annexe, guitars hang from the wall on the top floor, which leads to a snug and third bedroom 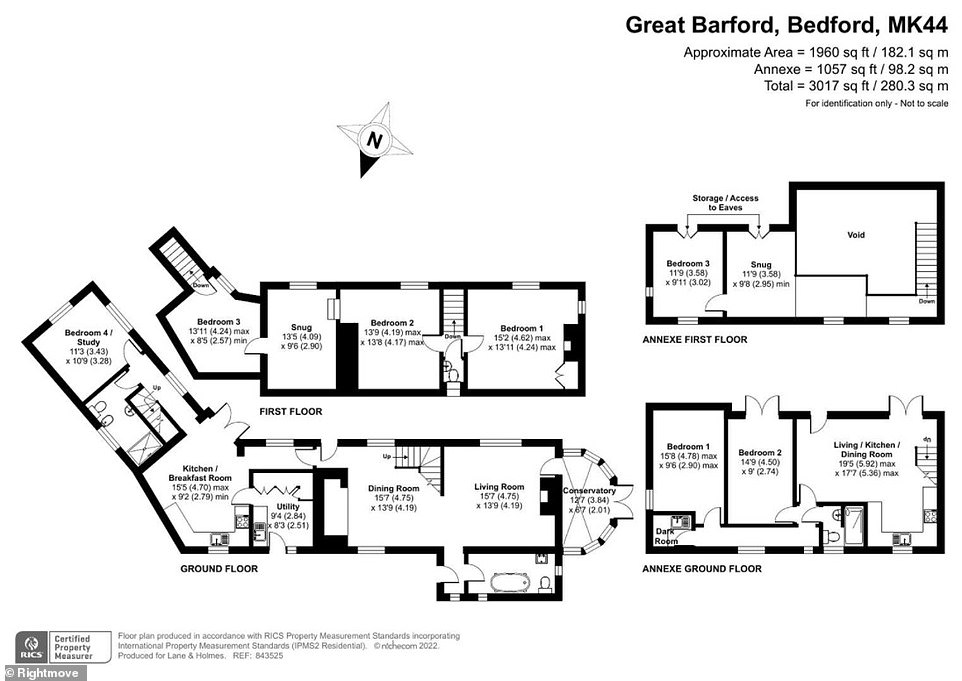 The thatched cottage has four bedrooms in the main building and a further three in the annexe. There is a small conservatory, together with a characterful bathroom off the main entrance hall, a kitchen and breakfast room, a utility room and a study that could easily double as a fourth bedroom

Who was Dame Barbara Cartland? 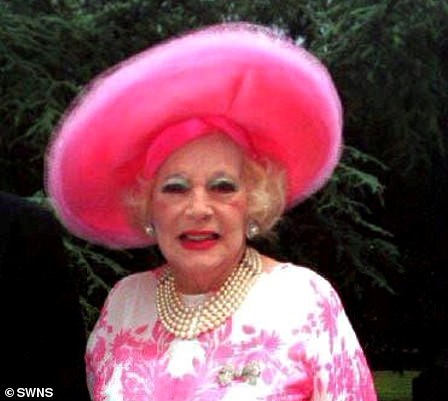 Dame Barbara Cartland was born in 1901 and died 14 months shy of her 100th birthday. The author was known for dressing in pink

Dame Barbara Cartland was born in 1901 and died 14 months shy of her 100th birthday.

During her career, she became one of the most prolific novelists in history, selling an estimated one billion books, most of them romantic novels with a historical setting.

In later life she took to dressing entirely in pink.

She was a household name, famous for pithy comments on manners and morals.

Apart from the romantic novels, she wrote a few relatively serious books at the start of her career.

She also did a stint as a gossip columnist for the Daily Express, where she became a favourite of the proprietor, Lord Beaverbrook, and through him, of Winston Churchill and F.E. Smith.

There were flirtations with racing cars and gliders, and an eccentric but successful campaign to establish a wartime wardrobe of wedding-dresses for our gals in battle dress.

After moving out of River Cottage in 1949, she then lived at her beloved Camfield Place, formerly the home of Beatrix Potter, a ten-bedroom mansion set in 400 acres of farmland and woods near Hatfield, Hertfordshire.

Newspapers dealing in obituaries received a gift after her passing: a pink-bound volume composed by herself and entitled How I Wish To Be Remembered.

In 2001, the Daily Mail reported that she left nothing in her will.